Festivities, election rallies: What happened in the weeks leading up to India's 2nd COVID-19 wave 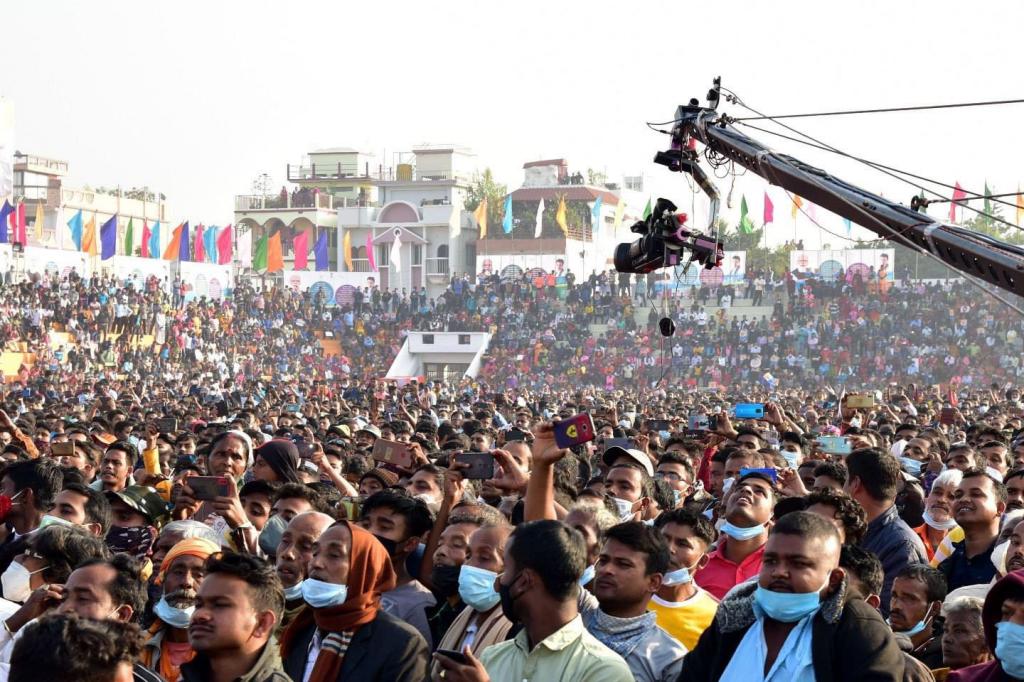 Five states in India – Punjab, Uttar Pradesh, Manipur, Uttarakhand and Goa – are preparing to go to polls this year, even as the omicron variant of SARS-CoV-2 that causes COVID-19 is driving a fresh surge across the world and the country.

Big-ticket rallies with hundreds of maskless attendees held over the past weeks and crowds thronging decorated streets on Christmas and New Year remind of a situation right ahead of the lethal second COVID-19 wave that shook the country in April and May.

Here is an account published in May 2021 of superspreader events leading up to the surge:

India is a diverse and big geography that can have simultaneous outbreak of multiple COVID-19 variants, according to experts. A new variant always leads to faster spread. It means, there could have been multiple outbreaks in the country, each requiring a customised strategy to curtail. That did not happen because we did not acknowledge the outbreak.

State after state opened up while allowing super-spreader events like religious festivals and election rallies. The Election Commission on February 26, 2021 declared state elections spanning over two months. “We laid the red carpet for the variants through events like the Kumbh Mela, assuming there was no virus around us. Even when we knew of the problem, there was a delay in the government to contain the spread, leading to unimaginable circumstances,” said T Jacob John, a virologist and professor at Christian Medical College, Vellore.

Take the case of Kerala, which was an outstanding example of managing the pandemic and deployed a well-thought-out strategy. Though India’s first cases of the pandemic were reported from Kerala on January 30, 2020, the state successfully flattened the curve by May, even as cases were multiplying in other states. Its deft handling of the pandemic through the “delay the peak” model was recognised worldwide. There were even days when Kerala reported no cases. It took the state four months to report its first 1,000 cases.

“After  the  initial  phase  of  success  in flattening the curve, priorities of the state changed drastically. COVID-19 took a back seat in the face of two successive elections and the celebration of different festivals. The state seemed a little apprehensive of the possible second wave, which had now turned into an alarming reality. The state even failed to anticipate evolving of the genetic variations of the virus,” says V Raman Kutty, a public health expert and epidemiologist based in Thrissur. Even the state health department admits that two successive elections — the first one to the panchayats, municipalities and city corporations in December 2020, and the second to the state assembly in April 2021 —  contributed immensely to the rise in cases.

As per the state health department, COVID-19 cases have gone up by 255 per cent since April 14, a day when the state celebrated its harvest festival Vishu and people in large numbers engaged in shopping and festivities. “The elections and unprotected interactions in the society have created a situation in which the state failed to find a breathing period between the two waves,” he added.

K K Shailaja, the outgoing health minister of Kerala, said, “Other than elections and celebration of festivals, people across the state found the post lockdown period as an occasion for what experts call revenge socialisation.”

As a result, Kerala’s situation in the second wave is similar to the rest of the country. ICU and ventilator beds earmarked for COVID-19 patients are fast filling up. The pandemic, which was earlier confined to the elderly and to those with comorbidities, is now prevalent among the young with little health problems.

The state known for the country’s most robust public healthcare system seems grossly unprepared for the second wave in which active cases crossed the 0.3 million mark on April 30.

Kerala’s positivity rate (percentage of positive cases to total tests) is about 25 per cent and the state has lost over 5,300 lives to the virus.

In West Bengal, which had an eight-phase elections and saw over 100 mega rallies, a state health ministry official concedes that the government saw signs of the second wave in the first half of March, as the cases started to rise.

There was little anyone could do since the state was in election mode and the Model Code of Conduct was in place, says the official requesting anonymity. “Along with the obvious role of election, the new variants must have also played a role,” says Manas Gumta, a physician in North 24 Parganas and general secretary of the Association of Health Service Doctors, West Bengal.

Subhrojyoti Bhowmick, clinical director of Peerless Hospital, Kolkata, says the spread of the contagion beyond Kolkata also hints towards the role of elections. “Most of the areas that went to election in later phases, and hence had more meetings and rallies, are recording more cases,” says Bhowmick.

As per the West Bengal government data, 19 districts apart from the Kolkata urban agglomeration contributed 56 of the state’s 216 cases (26 per cent) on February 26 — the day election schedule was announced. On May 3, total number of cases had spiralled almost 81 times to reach 17,501.

Districts like Birbhum and Malda that went to poll in the last phase on April 29 had two and one cases respectively on February 26, but 833 and 522 cases on May 3.

“In states that have not had elections, the spurt in cases is due to the congregations of different kinds. But in West Bengal, large congregations at the moment are mostly linked to the election,” said Giridhar R Babu, an epidemiologist associated with the non-profit initiative, Public Health Foundation of India based in Bengaluru.

“We may not have the data from West Bengal or India but the analysis of the United States presidential election clearly establishes the correlation between large electoral meetings or rallies,    often without  maintaining COVID-19  norms,  and a spurt in  COVID-19 cases,” says Bhowmick.

“A long election is definitely contributing to the COVID-19 rise because it is maximising exposure,” says Arunava Majumdar, a former director of All India Institute of Hygiene and Public Health, Kolkata.

Sukumar Mukherjee, member of the State Advisory Committee on COVID-19, and a physician based in Kolkata, said covid-19 cases in West Bengal may reach around 25,000 per day by mid-May, triggering “a Delhi like situation”, with Kolkata and adjoining districts likely to be most affected.

Doctors say the positivity rate is already 40-90 per cent in Kolkata and adjoining areas, with hospitals generally recording the higher range. The overall positivity rate in the state has reached 29 per cent.

“The second wave is proving to be much bigger than the initial wave. During April, we had a vertical rise in the number of cases. The situation is already difficult with virtually no bed left in most hospitals,” he says.