Last year, while battling her own anxiety in the labour room, first-time-mother Kushumlata was also grappling with a fear familiar to most women in Haryana. “What if my first-born is a girl?” she kept wondering. “But my in-laws’ happiness knew no bounds when they saw the newborn. They not only celebrated her arrival, they named her Divyanshi, or part of the divinity. This was unthinkable a few years ago,” she says rocking the eight-month-old.

Over the past six months, about seven girls have been born in her village, Amarpur Jorasi in Mahendragarh district, where sex ratio at birth (SRB) stood at just 291 girls per 1,000 boys in 2014.

The World Health Organization suggests 952 girls for every 1,000 boys as a healthy sex ratio to ensure gender balance. But for decades, the entire state was infamous for sex-selective abortion, infanticide and neglect of the girl child. With 789 girls per 1,000 boys, it had the second-worst SRB in 2001, shows the census data; Punjab fared the worst with 754 girls. The ratio remained almost unchanged over the next decade.

But over the past few years, the government claims a remarkable improvement in the situation. By June this year, say anganwadi and asha workers at Amarpur Jorasi, the village recorded an impressive srb of 1,190 girls per 1,000 boys.

An analysis of decade-long data available with the state’s Women and Child Development Department shows that in 2018, for the first time one district, Jhajjar, crossed the healthy ratio of 952. This year, till February, three districts (Jind, Kurukshetra, Panchkula and Panipat) had attained the ratio. Mahendragarh and Bhiwani districts which showed consistent improvement in sex ratio have been awarded by the Union government.

HARYANA’S ACHIEVEMENT becomes pronounced at a time when the Census’ Sample Registration System (SRS) survey, unveiled in July 2019, paints a grim picture for the country. The report shows SRB for the country has plunged to 896 in 2015-17 from 909 in 2011-13. 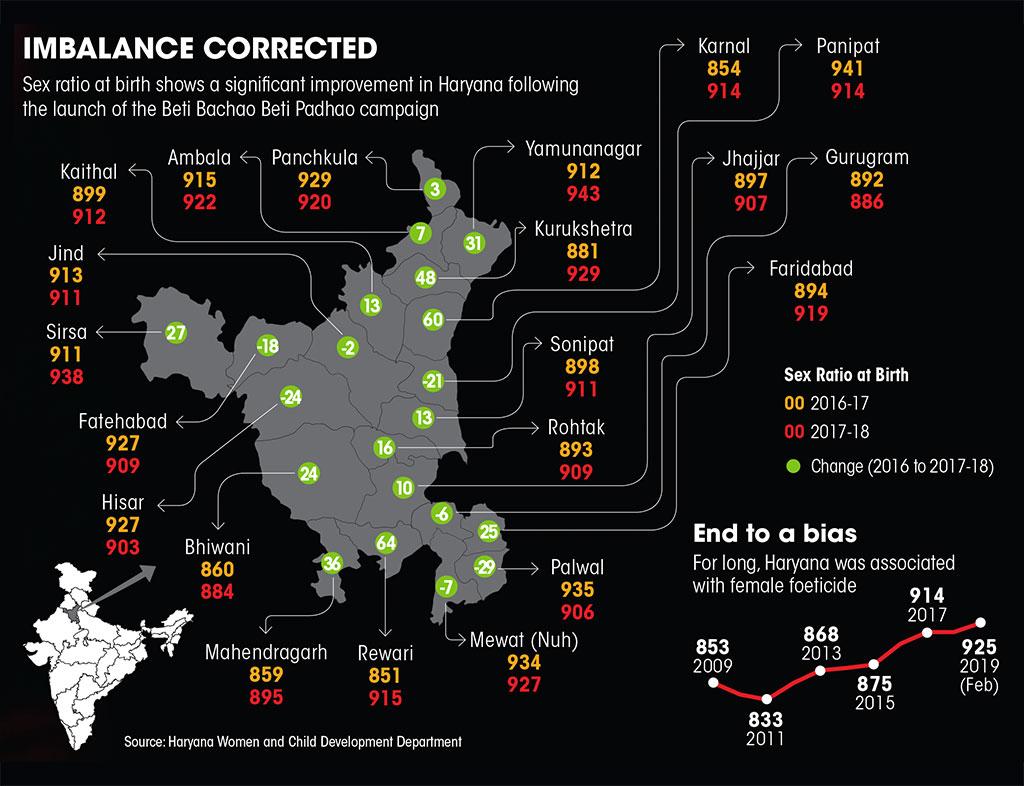 Kushumlata attributes Haryana’s success to the several rallies and awareness programmes organised at schools, villages and anganwadi centres in recent years to champion the cause of the girl child. “They were conducted as part of the Beti Bachao Beti Padhao (BBBP) campaign launched by the Union government in 2015,” explains Manisha Sharma, anganwadi sevika at Amarpur Jorasi.

Though the Pre-Conception and Pre-Natal Diagnostic Techniques Act (pcpndt) has been in place since 1994 to deter sex-selective abortion, it did not have much impact. Expectant mot- hers used go to Rajasthan to find out the gender of foetus and terminate the pregnancy in case of a girl child, she says. “But following bbbp, the state has put in place a surveillance system, under which we track every expectant mothers in the village,” says Sharma.

A study published in the Journal of the London School of Hygiene and Tropical Medicine in 2017 shows in the first 12 months of BBBP, the state government lodged 215 firs against violators and arrested 200 doctors, quacks, parents and their relatives.

But what brought about the real change is the gentle persuasion through BBBP. Sex-selective abortions are mostly practised by poorer families, who consider girl children a burden. To change their attitude, the state initiated “Aapki Beti Hamari Beti” scheme in which it grants a subsidy of Rs 21,000 to families on the birth of first girl child.

“People now celebrate the birthdays of girl children and perform kuan puja, a ritual associated with male child,” says Sunita Devi, sarpanch of Dhanana village in Bhiwami. BBBP also appears to have changed the opinion of khap panchayats. “People used to slip into depression after the birth of a girl child. Now that girls are excelling in studies and sports, they are happy,” says Virendra Sandwa, head of Kaliraman khap panchayat.

SO IS ALL well with Haryana? Five districts are yet to achieve the 900-girl mark. Worse, srs survey shows srb for Haryana is 833 — way below the government claims. While the discrepancy could be due to the way data is collected and analysed, many say sex-selective abortions are still rampant across the state.

“Several women resort to pills or take the help of untrained helpers for abortion,” says Kalpana Sharma, a resident of Amarpur Jorasi. Such incidents suggest the government’s surveillance may not be foolproof.

Consider this. Portable ultrasound machines, which can be used by connecting it to a computer, tablet or smartphone, are easily available on e-marketplaces like IndiaMart and Alibaba and cost about $1800 (Rs 90,000). When Down To Earth contacted some of the wholesalers listed on the websites, they claimed to have sold thousands of such machines to individuals.

(With inputs from Vivek Mishra)