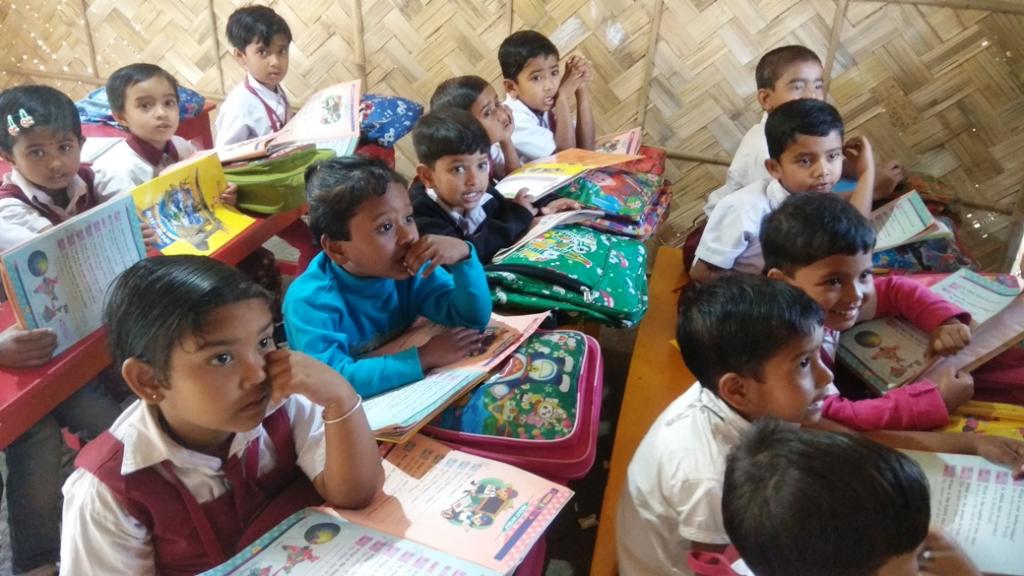 These children live in a settlement extremely close to the world’s largest mangrove forest that is often ravaged by cyclones. But most of them had limited understanding of how climate change is linked to these extreme weather events or other environmental problems.

And it is not the lack of internet penetration that was causing this gap. Champa (name changed), a student of class eight, is familiar with online messenger applications WhatsApp and Google Meet but appeared lost when asked about pradushon (pollution).

Knowing English will help children understand climate change better because a substantial amount of scientific literature on the global phenomenon is in English, according to Abul Kalam Azad, a senior government official at the block-level. His child joined the school this year.

The school intends to avail an affiliation from the Central Board of Secondary Education (CBSE) in the coming years. It also plans to focus on environmental education.

We have to make them understand how Sundarbans is getting affected inch-by-inch each day, said Satarupa Mazumder, who founded the institute. “It is their land and they must learn how to save it.”

Mazumder came to the town with her aunt in 2012 to donate a sewing machine. “People from the local communities urged me to help improve their children’s education when they learnt I am a school teacher in Kolkata,” she said.

Mazumder set up a teaching centre under a thatched roof the same year with around 25 students and three local teachers, visiting the school once a week to monitor the activities.

Initially, the families had to be convinced to send their children to school, she recalled.

In 2018, when she managed to raise the first funding for the institute, she resigned from her job in the city to dedicate all her time at Hingalganj.

There are 42 inhabited villages in Hingalganj block with a total population of 159,469 (Census 2011). Statistically, there are 133 schools, including 21 secondary and 11 senior secondary schools.

Only 36 of the 391 CBSE-affiliated schools of West Bengal are in the North 24 Paraganas, mostly in its urban centres.

Private English-medium junior schools are cropping up in block-level towns.

“It’s a competitive situation. Without English and Computer Science, it is difficult to find employment. The parents of these children are poor but they understand this. They are trying their best to have their children educated,” said Gourchandra Sardar, the school supervisor and accountant.

Studying English is essential if we want to make a mark at an international level, said Debes Mandal, a local member of the legislative assembly. “The chief minister has also said that English-medium schools will be set up at the block-level.”

“A child can acquire six different languages up to the age of 12 years. All you need is good teachers to speak to them,” said Mazumder.

The English-medium education not only introduces environmental pedagogy to the children but also enables them to upskill from professions that their parents have followed.

Jasim (name changed), a student of sixth standard wants to become a teacher. “Maths is my favourite subject,” he said.

His father is a farmer but in the flood-prone town, farming has become an unstable livelihood. Hence, his parents had to take up beedi-binding that fetches them Rs 175 a day for 1,000 beedis.

Another student, Rani (name changed), moved to Swapnopuron from a Bengali-medium school. Her father works in a factory and her mother is a tailor. “I want to be a lawyer,” the girl said.

Till the school gets a CBSE-affiliation, vocational training will come handy for them to earn livelihoods, Mazimder said.

The transition from Bengali to English as a medium of instruction was not easy for the students or the teachers.

Bikash Biswas, a senior English teacher of the school, said:

“There are students who have initially not studied in English medium schools. Teachers have to work extra hard with them because all our books are in English.

A three-month bridge course has also been introduced for the new students. “At times, we also organise sessions for parents,” said Abu Sufiyan Mandal, who teaches Bengali.

The five centres of the school have 28 teachers. Susmita Das left a city school and joined Swapnopuron three months ago.

The work here involves a lot more than imparting education, she told this correspondent. Conducting surveys and making parents understand how our curriculum is different are equally important, she added.

Acclimatising was another challenge for teachers who relocated from the cities. “The local diction is different. I took a little time to get familiar,” added Das.

Also, the phone network, at times, is poor and it becomes difficult to run certain softwares. Getting used to the local weather and the salty drinking water is an additional prerequisite for newcomers, the teacher said.