India’s migrant construction workers: An analysis of their welfare framework

There are prominent shortcomings in implementation, especially registration of workers and and collection and distribution of Cess

The novel coronavirus disease (COVID-19) pandemic had widespread and devastating consequences to communities and enterprises in India and across the globe. However, the situation was particularly grim for the 453.6 million internal migrants in India, evidenced by the unprecedented ‘reverse migration’ witnessed during the pandemic.

Their vulnerabilities were exacerbated by the fact a large section of the working-age migrant population in India finds employment in the informal economy, which denied them any access to social security benefits upon stoppage of work due to lockdown.

As a result, the country has seen a stupendous rise of the construction industry, particularly in the major metropolitan centres. The contribution of the construction sector to the real growth rate of the gross value added at basic prices reached 6.8 per cent during 2016-2019.

Construction, which was one of the worst-hit sectors during the pandemic, is also one of the key sectors in which India’s migrant workforce find employment. The NSSO (2016-17) puts the number of construction workers in the country at over 74 million.

Furthermore, 26 per cent of all households with migrant workers employed in the construction sector have a minimum of three members with at least two working adults of different genders, indicative of nuclear families with children, who can be viewed as associational migrants in construction.

The Jan Sahas Survey conducted at the beginning of the lockdown (March 27-29, 2020), found that 54 per cent of construction workers support three to five people, while 32 per cent support more than five people.

These legislatures mandated the institution of a Construction Workers Welfare Board (CWWB) — a tripartite entity with equal representation from workers, employers and the government. The CWWB is required to register all construction workers in the state and promote the welfare of registered construction workers through various schemes, measures or facilities.

For the purpose of raising capital for providing the welfare benefits under state CWWBs, collection of a cess at the rate of 1 per cent of the total cost of construction is mandated by the said legislations.

There are some prominent shortcomings in implementation, especially with regards to registration of workers and the collection and distribution of the Cess. The number of active / valid registrations vis-a-vis the total number of construction workers registered in the state CWWBs, is a major issue. 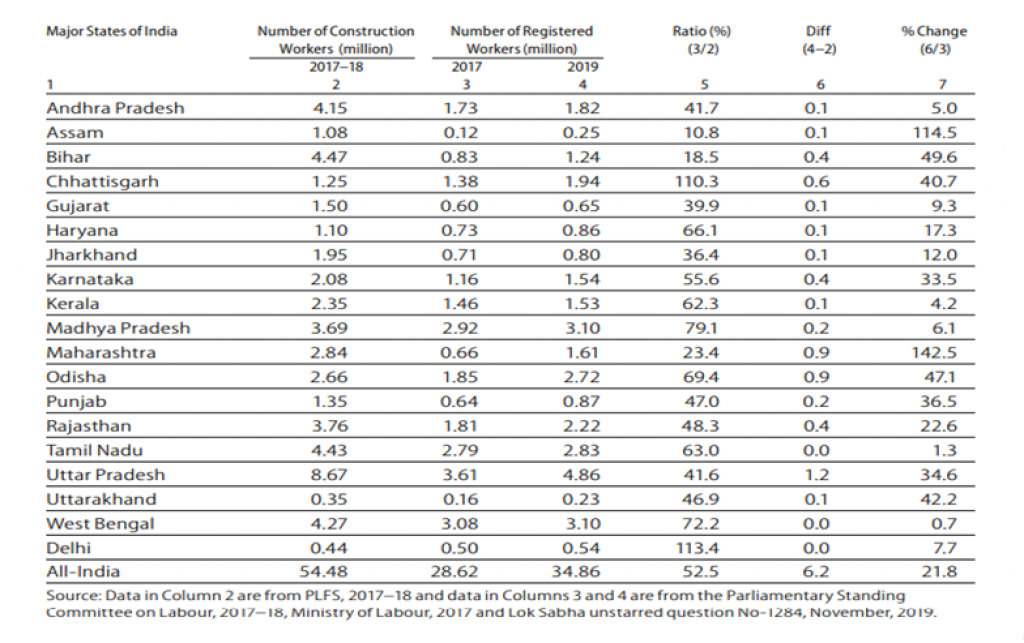 This can be attributed to the fact that the registration rates are not very high, the estimates show that only 52.5 per cent of all construction workers were registered in 2017. Rates of registration are extremely low in Assam and Bihar (< 20 per cent); in Maharashtra, Gujarat, Jharkhand and Uttar Pradesh, it is lower than the national average.

However, states like Delhi and Chhattisgarh reported a registration rate of more than 100 per cent, indicating the possibility of duplicate and fraudulent registrations.

Cess collected for and spent on construction workers 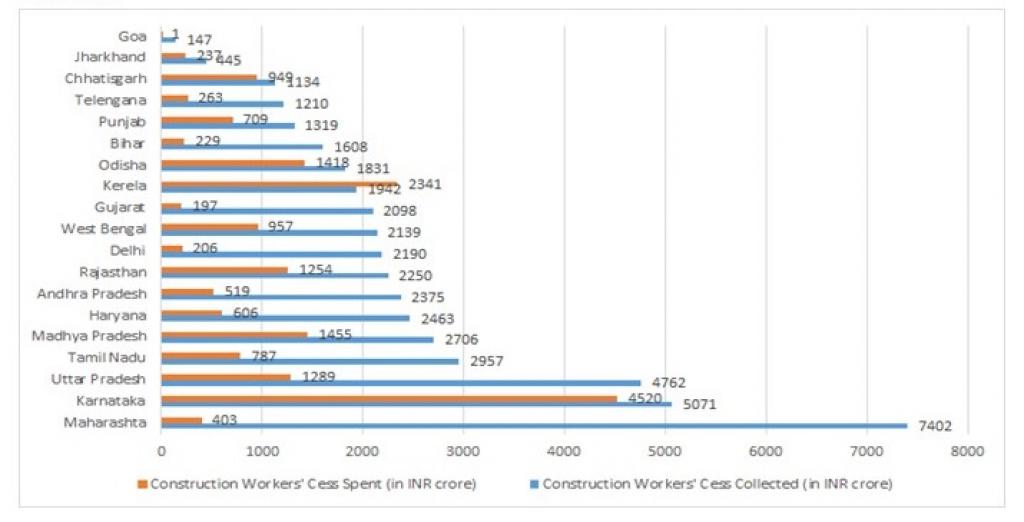 Moreover, the collection of Cess for the BOCWWB at the rate of 1 per cent of the total cost of construction and its proper distribution among workers is a major issue due to the implementation problem.

There is no proper mechanism for the collection of said Cess, its transfer to the concerned of BOCWWB, according to the assessment made by the 38th standing committee on labour of the Loksabha.

The committee also reported an under-assessment of Cess. As of 2019, only 39 per cent of the collected Cess has been disbursed to the workers.

This represents only a small percentage of the total construction workers in India, as estimated by the Periodic Labour Force Survey 2018-2019. The construction sector employs 83 per cent casual and 11 per cent self-employed workers, according to the survey.

Only 5.7 per cent of the workers work on a regular basis, of which 3.9 per cent are informal and only 1.6 per cent are regular formal workers.

Overall, only 2.2 per cent of the total construction workers are availing some kind of social security benefits, and only 1.5 per cent are regular workers eligible for benefits from the EPF, which clearly manifests the vulnerable condition of the construction migrant workers and their futures.

There is an urgent need for the administration to intervene and ensure that the gap between Cess collected and money spent on welfare activities through CWWBs is reduced. The silver lining has been the intervention by the judiciary in a few cases.

Recently, in July 2020, the Delhi High Court asked the Delhi government to see if registration of 10 workers with the BOCWW board can be verified online as the applications were made online.

The bench also said that there should be “no laxity” in registration of workers with the Board, through which they could get ex-gratia of Rs 5,000 during the pandemic. The state and the judiciary should step up and enable provision of benefits to all workers.