Left without a vote 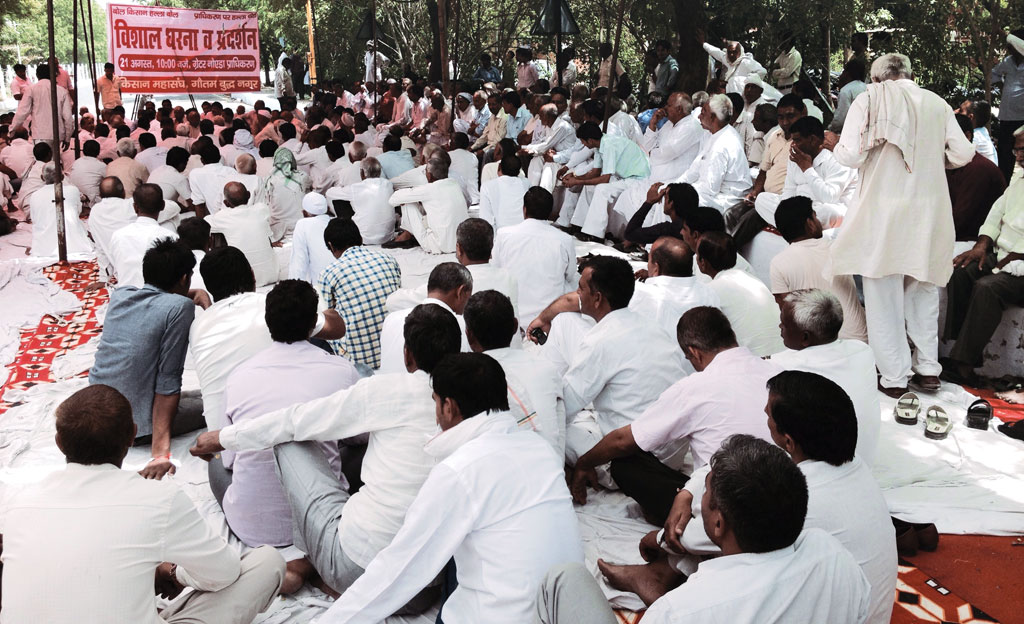 Residents of 207 villages in Noida and Greater Noida have been protesting since September 2015 to get back their right to local self-governance (Photo: Rupesh Verma)

Residents of 207 villages in Noida and Greater Noida industrial areas have been staging protests in front of the administrative buildings of the industrial authorities since September 2015. Their demand is to restore their constitutional right to self-governance. The problem erupted on September 18, when the state’s Panchayati Raj Department issued an order saying the villages are part of industrial townships and cannot participate in the panchayat polls in November.

Going by the government order, the state government-appointed New Okhla Industrial Development Authority and the Greater Noida Industrial Development Authority will now be responsible for development of these villages, instead of the democratically elected gram panchayats (village councils). “This will restrict people’s involvement in planning development works of their villages, such as roads, drinking water supply and sanitary provisions,” says Alok Pandey of Delhi non-profit Participatory Research in Asia (PRIA) that works on strengthening local governance. Industrial authorities are usually interested in big projects that will generate revenue and are more concerned about passing housing maps, monitoring construction activities and regulating the market price of land and buildings. Though these villages can form resident welfare associations, such associations have no legal sanctity, Pandey explains.

"After being part of township, we are no more eligible for the 29 welfare schemes of the Union and state governments for village residents,” says Rupesh Verma, lawyer and member of Panchayat Chunav Bachao Manch (PCBM), a village residents’ platform to fight for their rights. Most residents depend on agriculture and related works, and depend on welfare schemes like the employment generation Act, public distribution system and pension scheme for both elderly people and widows. Earlier, panchayat heads would help verify the beneficiaries of welfare schemes or address any kind of grievance in the village. Now, the residents will have to make rounds of the district headquarters for any help related to welfare schemes, adds Verma.

While this is for the first time the residents of Noida and Greater Noida villages have been stopped from participating in the panchayat polls, it is not the first attempt of the Uttar Pradesh government to subvert their rights to self-governance.

The first such attempt was in December 2001 by then chief minister Rajnath Singh who amended the Uttar Pradesh Industrial Area Development Act (UPIRDA) of 1976 to bring the 207 villages under the state government-appointed industrial authorities. The amendment faced stiff opposition from the residents. Before the state went into panchayat polls in 2005, then chief minister Mulayam Singh Yadav withdrew the amendments and allowed the villages to participate in the panchayat polls.

But in 2009, the next government under Mayawati, invoked the amendment. In fact, her government issued a notification to bring another 982 villages under another authority—the Yamuna Expressway Industrial Development Authority (YEIADA). But under pressure from the residents, she withdrew the notification just before the 2010 panchayat elections.

The real blow has come from the Akhilesh Yadav government. In a January 2015 notification, his government stated that the 207 villages in Noida and Greater Noida are part of the industrial authorities. The notification, however, remained silent about the 982 villages around YEIADA. The September 18 order of the Panchayati Raj Department was only a reinforcement of this notification.

PCBM contested the decision of the Akhilesh Yadav government in March 2015 in the Allahabad High Court. But the court favoured the state government in August saying that the notification is as per the 2001 amendment of the UPIRDA.

After the setback in the high court, the village residents are hesitant to move the Supreme Court to relook at the decision. “We lost the case because we didn’t argue well. If we lose the case in the Supreme Court, we will lose our fight forever,” says Verma. So the village residents are now fighting their battle outside the court, he says, adding that their relentless protests have started yielding results.

“In November, chairpersons of the Noida and Greater Noida authorities told us that the authorities may de-list 145 of the 207 villages from the township and that we may be able to participate in the panchayat elections,” Verma informs.

Attempts to include villages in industrial towns indicate manipulation of laws by the state government to favour the industry. “Since local self-governance is a state subject, state governments often try to subvert their role by bringing villages under the jurisdiction of authorities,” says Pandey. “This helps them acquire land for industrialisation without any pressure from people’s groups and representatives.”

Experts say the Uttar Pradesh government’s order is against the spirit of the 73rd and 74th amendments of the Constitution, which states that “an area should be either under panchayat or municipality”, says Srikanth Viswanath of Janagrah, a non-profit in Bengaluru that works on urban governance. “The government is creating a number of parallel institutions like industrial authority that are accountable to it. Such institutions weaken local bodies by overriding their rights,” he adds.

S M Vijayanad, secretary, Ministry of Panchayati Raj, agrees with Viswanath. “We cannot replace or remove any constituted panchayat or urban local body. It has its constitutional validity. Election to these bodies can be temporarily delayed in some emergency cases, but cannot be scrapped. It can be challenged in court.”

A N P Sinha, former secretary of the Ministry of Panchayati Raj, further explains the importance of local governance: “Local bodies are one of the supreme constitutional bodies in any country. The government can never supersede it in any court.” Yogesh Kumar of Samarthan, a non-profit in Madhya Pradesh that works on strengthening of local governance, says such unconstitutional move may set a precedent for other states.