The Bihar administration has started an intensive vigil across the state to check incidences of child trafficking that have increased in the wake of the novel coronavirus disease (COVID-19)-induced lockdown and floods in the state.

Natural disasters have often acted as triggers for human trafficking and the present situation is proving ideal for trafficking gangs, officials said.

Authorities have rescued around 300 children from the clutches of human traffickers in the last three months. They have also arrested 72 traffickers. Last year, 316 children including 55 girls had been rescued.

“We have information that human traffickers have become active at this time,” Bihar Social Welfare Department Director Raj Kumar said.

The administration has activated the Railway Protection Force, intensified vigil at railway stations and bus stops and has also alerted village council officials to keep a tab on human trafficking activities in villages, Kumar said.

The state police department too has alerted all district police chiefs in the district and the railway departments about possible child trafficking.

This time, human traffickers have adopted a different modus operandi, according to a letter issued by the inspector general of police (Weaker Section), Crime Investigation Department, Bihar. “Since train services are limited, human traffickers are sending buses to smuggle children out to various parts of the country,” the letter said.

Some 800 children were recently rescued from various factories across India and brought to Gaya by trains. Gaya has the largest number of child labourers.

The children rescued by the authorities said they moved out of their homes to work as child labourers as their parents were battling for survival in the absence of any jobs available at home.

“I left my home to work as a child labourer in a bangle factory in Jaipur since my father had no money to arrange food for us,” Raja Kumar, 15, one of the child labourers rescued by police, said.

He hails from Dobhi block in Gaya district. He studied in Class VI prior to the lockdown. But he quit studies to earn money for his family after COVID-19 struck.

Rakesh Kumar, 12, another child rescued by police, said he joined a group of children leaving for Jaipur to earn money since he faced a food crisis at home. Rakesh, who belongs to Belaganj block in Gaya district, also worked in a bangle factory and lived with a group of 11 children in a small room.

Parents themselves have employed their children to work in fields in several parts of the state to earn more money for the family.

During a recent tour of Sitamarhi district, this correspondent found a large number of children engaged in cutting fodder to sell in the market or feed cattle.

Little children in school uniforms were seen taking boat rides across the Bagmati river and bringing fodder on their head. Sitamarhi was one of the 16 districts severely affected by floods this year.

“Floods and COVID-19 have caused serious trouble for the villagers. You can see entire families working in fields to cut fodder and sell in local markets to earn a few rupees,” Husas Shah, a villager from Shiv Nagar village in Sitamarhi district, said.

“The villagers are battling for jobs while the Mahatma Gandhi National Rural Employment Guarantee Act has failed to serve any purpose. The situation is dire,” Shah added.

This correspondent spotted a number of children carrying mud from the river to repair their homes made of earth that were damaged by the floods.

“The impact of the lockdown has been unprecedented. The poor villagers are sending their children to work in factories, unmindful of their physical exploitation. They want money somehow,” Suresh Kumar, executive director of Centre DIRECT, a Bihar-based non-profit fighting child labour, said. 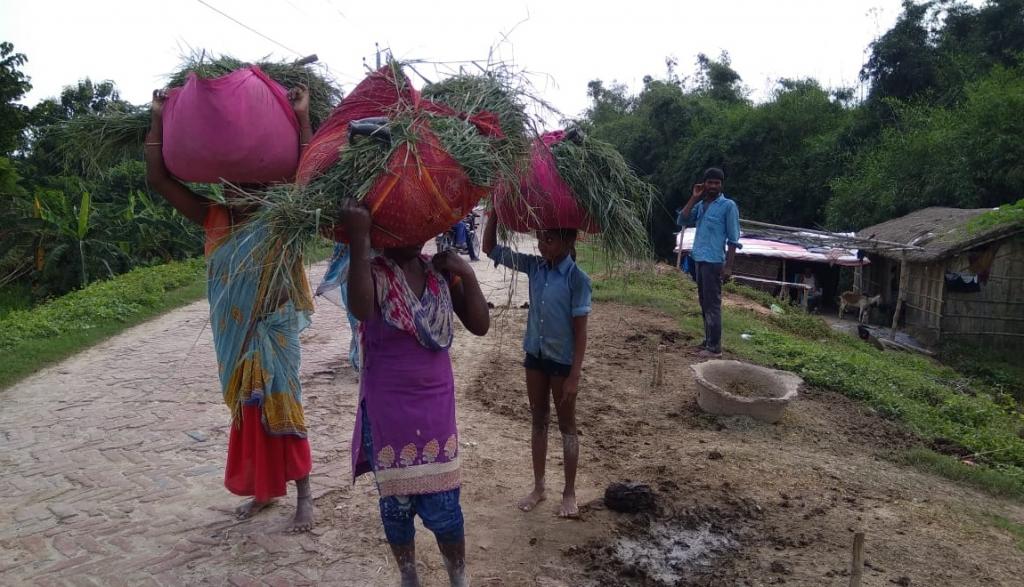 “What is further surprising, the traffickers have prompted the parents to accompany their children and carry them to factories to dodge the authorities,” Kumar added.

He warned that child trafficking would pick up momentum after the festive season was over.

Bihar and Uttar Pradesh have the highest number of child labourers in India, according to an official report. Bihar has the highest proportion of child population (46 per cent) among all states of India according to a Bihar government report which, in turn, quoted the 2011 Census.

Bihar also ranks third in the number of children aged 5-14 years engaged as workers according to the same report.

Thirteen districts of Bihar account for 55 per cent of child workers in the state, according to the report.

Bihar accounts for 10.7 per cent of the child workers in India aged 5-14 years, according to the 2011 Census. There are 4.5 lakh children in the 5-14 years age group who are categorised as ‘main workers’. They work for six months or more in a year.

Another 6.3 lakh children are categorised as ‘marginal workers’, who work for less than six months in a year.