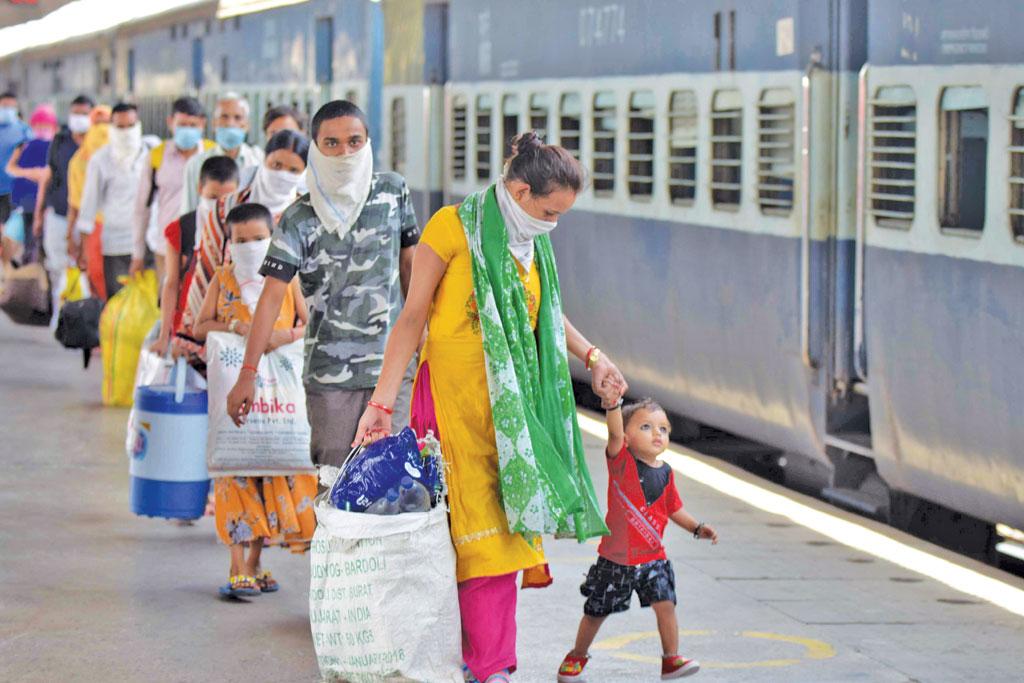 For someone who has been working on circular migration in India for decades, the news of the new draft National Migrant Policy being framed by NITI Aayog is an extremely welcome development. The need to do this has evidently been precipitated by the enormous suffering endured by the country’s circular migrants (those who migrate short term primarily to earn and remit money back home) during the novel coronavirus disease (COVID-19) lockdown in 2020.

As a draft copy of the policy, prepared in January 2021, acknowledges, circular migrants are the backbone of our economy and contribute at least 10 per cent of India’s gross domestic product (GDP). Yet, tens of millions are employed in precarious jobs in the informal sector without contracts or documents to prove their identity, and claim state support in the event of a crisis.

This reality was driven home through horrific scenes of migrants left without earnings or any source of social protection as the employers and contractors that they depended on for their survival, were hurt by the lockdown themselves and unable to fulfil promises of patronage.

The draft policy is clear in highlighting the vulnerability of migrants to such crises and describes the experience of migrants during the lockdown as a “humanitarian and economic crisis”.

Clearly there is strong political will and intent to never let this kind of tragedy happen again. The draft contains several radical recommendations that build on those made in 2017 by the working group on migration appointed by the then Ministry of Housing and Urban Poverty Alleviation, as well as recent research and policy analyses by leading thinkers in the field.

It seeks to take a rights-based approach and discusses the importance of collective action and unions to help migrants bargain for better conditions and remuneration.

The draft policy makes efforts to bring together different sectoral concerns related to migration, including social protection, housing, health and education. In doing so, it will lay the foundations for the ministries and line departments overseeing these sectors to work together in a more harmonious fashion, speaking the same language and operating on the same underlying assumptions.

The draft mentions the need for convergence across different line departments and proposes the establishment of a special unit at the Ministry of Labour and Employment which will work closely with other ministries. It proposes new management bodies for interstate migration and stresses the need to improve the data on migration, especially data on seasonal and circular migration.

All of these steps promise to create a policy environment that can better support migration and one that is based on sound data. The remit of the policy is broad, seeking to bring even the most marginalised groups under its umbrella. However, a more explicit mention of important categories of less-visible occupations is needed.

The International Labour Organization has drawn attention to the need to reach invisible workers such as domestic workers who number between 2.5 and 90 million in India. Although, in theory, the broad categories of interstate migrant and internal migrant would include domestic workers, it is too easy for them to fall through the gaps as they are not covered by protective law since India has not ratified the International Labour Organization’s Domestic Workers Convention, 2011.

The draft policy also conveys a willingness within government to recognise that the numerous laws and legislation that are in existence have not succeeded in protecting migrants as intended and recommends better implementation. This goal has been expressed in numerous policy analyses before.

There is a need to recognise that implementation has been very problematic and, carry out serious assessments to understand the microprocesses that lead to mistargeting, lack of uptake and various irregularities in the implementation of schemes, and, understand the political economy of migrant labour recruitment, placement and employment in key industries and why there is a strong vested interest in keeping migrants away from the purview of the law.

Employers use recruiters to find and manage workers and thereby absolve themselves from any responsibility for protecting their rights and providing decent working conditions.

It is not enough to say that laws should be implemented better. The same can be said of improving access to the Aadhaar card and other schemes.

There are some aspects of the draft policy that show it has not quite made up its mind about the ability of labour migrants to think for themselves and decide how they access the opportunities offered by migration.

Early in the draft we see a commitment to recognising migrant agency and language that portrays migration as an opportunity. But later in the document, this is less clear, especially in the section where tribal migration policies are discussed.

Tribal migration is constructed as a process whereby profiteering, “unfair” and immoral brokers or intermediaries are “luring”, or worse still, trafficking, unsuspecting tribals away from their villages. There is a conceptually problematic fudging of trafficking and economic migration and also a lack of clarity on how the migrants themselves perceive these processes. Domestic work, which is named as one of the occupations into which tribals are trafficked, has now become an important source of income for tens of thousands of women and adolescents from impoverished backgrounds in eastern Indian states working in the metropolises.

There is no doubt that there are instances of abuse and other crimes against these women. However, such incidents do not represent the majority experience and they cannot be cited as the reason for controlling the entirety of such migration. There is an urgent need to distinguish cases of extreme exploitation from the rest, and better understand how migrants themselves weigh up the costs and risks against potential benefits of working in the city.

The draft policy lists a number of government programmes and laments their failure in checking migration from tribal areas. The underlying assumption appears to be that migration is an expression of agency among other sections of society but not among tribals on account of their extreme poverty and dependency. The fact that they may be trying to escape that situation through migration is overlooked.

While there are occupations such as brick kiln work where extreme exploitation and cycles of dependency are clear, not all tribal migrants can be viewed in an undifferentiated way as ignorant, gullible people who are incapable of making choices to further their own aspirations and strategies for advancement. Suggesting that we need to curtail their migration goes against the stated objectives of the draft policy to recognise migrant agency.

While migrants and their families recognise that brokers exploit them and earn relatively large amounts from their migration, they also recognise that without them, they would be unable to access employment outside the village. Recruiters, whether from their own community or from outside, are key in helping migrants to negotiate the huge cultural and economic divide between their own worlds and the world of modern urban employment.

They may do so by paying them advances which bond them to the job for several months—in the worst cases this results in perpetuating dependency and indebtedness, whereas in others it can release them from more humiliating borrowing from traditional patrons.

It is, therefore, a complex process that cannot be simplified and while it clearly needs to be regulated to avoid extreme exploitation, any effort to do so must be based on a thorough understanding of migrants’ perspective on the process.

The draft policy goes on to highlight other areas where migrants could be better supported including financial services, skills development, political inclusion and education, among others.

All these suggestions are well received but they are not new, and there is a need to understand past failures and suggest a way of doing things differently. For example, efforts by banks to reach migrants for remittance services have had mixed results.

One imagines that a mixture of irregular earnings, reluctance to engage with formal institutions, discrimination faced and the lack of identity documents are the barriers to such inclusion.

Informal service providers do not ask for papers or proof of identity. Overall, the draft policy is in the right direction but there are areas where a more innovative and workable way needs to be found. Otherwise migrants will be stuck in the same rut—having to carry the risks of migration in a hostile policy environment all by themselves.

(Priya Deshingkar is Professor of Migration and Development at the School of Global Studies, University of Sussex, UK)

The story was first published in Down to Earth print edition April 1-15, 2021