Nilgiris tribals allege they were duped of compensation

It’s a case of lies, deception and dubious land deals. And communities living in the pristine Nilgiris district of Tamil Nadu are at the receiving end of it all. Fifty-something S Kannan, for instance, who belongs to the Paniya tribe, used to live in Pulliyalam village set deep inside the district’s Mudumalai Tiger Reserve (MTR) till September 2018.

But fraudulent activities by the officials responsible for a relocation programme from the reserve’s core area have left him squatting on a tiny 14 square metres (sq m) patch of land outside the forest which he can never own.

As the first instalment, the state government paid Kannan Rs 4 lakh to leave his ancestral home inside MTR to create inviolate space for tigers and elephants. But land brokers, in connivance with the forest range officer and an advocate, extracted the amount from Kannan by fraudulently selling him poramboke land in Gudalur block.

Poramboke land is common land that cannot be owned by anyone. “They did not tell me this was not their private property,” he says.

Kannan is not the only one cheated. As many as 21 tribal people, looking forward to the relocation programme that would have finally given them land ownership, have suffered a serious setback. Collectively, they have been swindled of Rs 2 crore. They filed a first information report (FIR) on September 3, this year, in which Kannan is the main complainant.

But Adivasi Munnetra Sangam, a tribal-led non-profit working in Gudalur, believes the scam has a much bigger magnitude. In January this year, it sent a letter to the National Commission for Scheduled Castes stating that 93 families have been duped of Rs 6.7 lakh each. 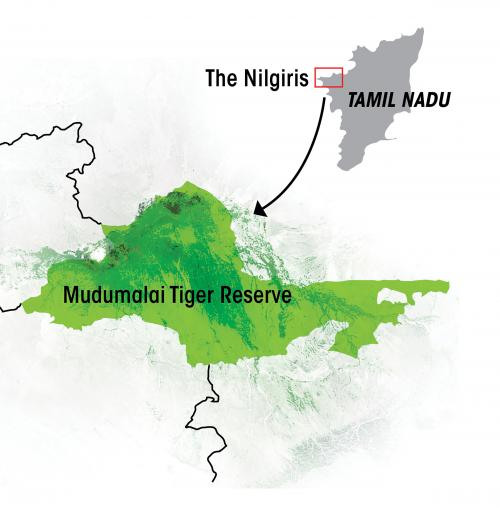 It all began in October 2016 after the relocation programme took off in MTR in three phases. The first phase, completed in 2016-17, involved relocation of 58 tribal and 177 non-tribal families from Bennai and Nellikarai villages.

According to the 2008 relocation plan of the National Tiger Conservation Authority, people can choose between Option I (money for land) and Option II (land for land) as compensation for their own land.

The Chetti community, living in the core area as landowners, chose Option II, and has been rehabilitated in Aiyankolli village. But people like Kannan, who did not  have land titles, were “given” Option I. This meant each family would get a total of Rs 10 lakh in three instalments.

Lawyer C Sukumaran and Nellakottai range officer Suresh Kumar, who are on the district-level committee (DLC) in charge of relocating people, swung into action on June 9, 2018, when the Union Ministry of Environment, Forest and Climate Change sanctioned Rs 25.5 crore for the scheme. They allegedly began persuading the affected comm-unities to buy land.

“Kumar pretended to be friendly and told us not to worry about finding or purchasing land,” says Kannan. “He first showed me land in Aiyankoli. But it was far from the forest area with no means of collecting forest produce, so I refused,” says Kannan. He then showed poramboke lands at Machhi-kolli and Patavail villages in the fringe areas of MTR.

This was their strategy. “The brokers would visit the village, take four to five people along and show them the land. Kumar and Sukumaran would also take people there in forest department vehicles. They never told us that it was government land that we could not buy,” says Kannan.

He decided to buy 14 sq m in Machhikolli because it has road connectivity. EJ Joseph, one of the land brokers, pretended to be the owner of the land. On September 6, 2018, the day the first instalment of Rs 1 lakh came to Kannan’s bank account, Sukumaran told him to transfer Rs 70,006 to Joseph’s account.

“Sukumaran had my passbook. In fact, he had the passbooks of all of us. He filled in the withdrawal slip as well,” says Kannan. This land transfer was made on the promise that Kannan would pay the balance to Joseph as soon as the second instalment arrived.

Similarly, K Kujan of Pulliyalam village paid Rs 5,43,000 to land broker Baby for 20 sq m land in Machhikolli. He knew he had been duped as soon as he started building a house there.

“Forest officers told me I could not construct a house on revenue land. The revenue officers refused to provide electricity and water connections saying the land did not belong to anyone,” says Kujan. “The brokers were trusted members of the Chetti community. The tribal people knew them,” says KT Subramani of Adivasi Munnetra Sangam.

Meanwhile, Kannan worsened his situation by transferring Rs 305,029, the second instalment on November 29, 2018. Kumar and Sukumaran convinced him that he would soon get his land title since he is a tribal and can live anywhere. “This is the reason I gave the money a second time,” says Kannan.

A Madhavan, the head of Nagampalli gram sabha, paid Rs 3.70 lakh for a patch of 20 sq m land in Machhikolli. He says Kumar assured him that the land was good. The deceit has come as a big blow to them.

They have also been charged under the Scheduled Castes and Scheduled Tribes (Prevention of Atrocities) Act, 1989. “We registered the FIR based on our preliminary investigation. Our probe is still on and more people are likely to come forward,” says Kaliselvan. 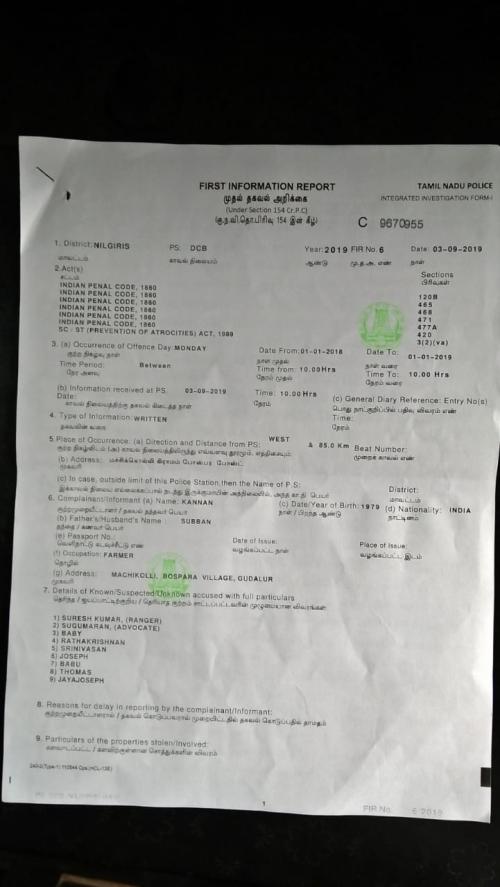 The FIR in question

Despite the FIR, Kumar continues as the range officer. Giving him a clean chit, MTR Field Director KK Kaushal says, “We completed the relocation process of the first two phases without any complaint. Some people tried to create problems in the last phase. They have named one of our range officers. I do not know what is his involvement, but the department has nothing to do with it.”

Kumar feigns innocence: “I got the money transferred to the people’s accounts. What more can I do? If they decide to buy a piece of land, it is their wish. I have nothing to do with it.” He says he was not aware of the deal and denied taking the people to the disputed spot.

Sukumaran is absconding. Down To Earth (DTE), however, managed to track him down. He claimed people are being incited against him. “It’s a false controversy created by the Rashtriya Swayamsevak Sangh, which wants to make political inroads into Gudalur.”

DLC in-charge of the relocation process, of which Sukumaran and Kumar are members, also comprises the district collector as its chair, deputy director of MTR as its member-secretary and officials from revenue, agriculture and water departments. Under the National Tiger Conservation Authority guidelines, when people choose the money package, DLC has a “handholding” role to ensure that they get the land.

“I did intervene. Why else do you think the investigation happened and the FIR was lodged?” Nilgiris district collector J Innocent Divya argues. She claims the probe began after she received a written complaint from Madhavan on October 2, 2018.

MTR Deputy Director S Senbaga-priya, also the DLC’s member-secretary, says the committee could not hold an inquiry due to lack of evidence. “We got the letter but people did not produce proper evidence,” she says.

“In our records, all transactions are proper. They first bought legal land and we helped them, but then they bought poramboke land on their own. We cannot control how they use the money. You can see the sale deed of the person who has filed the FIR. It is all legal,” she says, showing the sale deed of Kannan.

On examination, DTE found the sale deed belonged to Kannan, son of Balan. The FIR has been filed by Kannan, son of Subban. Clearly, something is amiss.

Before the relocation process, communities did not have title for their ancestral land and mostly cultivated coffee. But life was comfortable. M Kamalechi of Pulliyalam village, who paid Rs 3.70 lakh, says, “We were happy in the forest. We knew the place. We would get fish from the rivers and vegetables from the Chettis’ fields.”

B Balan of Pulliyallam had been cultivating 0.6 hactares for generations. They now find themselves cheated of Rs 3.70 lakh and squatting on 14 sq m land.

“Tribal people depend on the Chettis for employment. They use their vehicles for going to markets. Many of them live on lands owned by the Chettis. So when the Chettis decided to move out of the reserve, tribal families decided to do so too,” says Subramani.

But now all that remains in the name of their ancestral home is Rs 16,577 in their bank accounts and a tag of being “squatters” on revenue land.