Panchayat elections are set to become all the more important 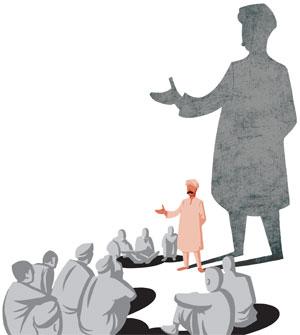 It's March 2042. India’s Parliament is debating the new government’s most ambitious constitutional amendment proposal. It seeks to give panchayats the mandate to have their own budgets, just like the Central and state governments.

Just five years ago, the country has switched to a presidential form of government. The constitutional amendment that brought this change was bitterly contested. Media reports say the latest amendment will sail through smoothly. While the ruling party has termed the move “path breaking”, other parties say it is a political necessity. But finally, every party wants panchayats to be “super governments”.

Ignored for decades and denied autonomy, there are widespread reports of elected panchayat heads having laid siege to legislative assemblies. Surprisingly, political parties that earlier protested power devolution to the last tier of government are now enthusiastic participants in the protests. It is expected that the first president of the United States of India, who was said to be under immense pressure from his party to suggest the amendment, would declare the arrival of the newly empowered village republics in a televised programme.

In 2017, the above scenario might appear to be political imagination stretched beyond all logic. But going by the political change the country is witnessing, it would be the next logical step. Evidently, it is not the political parties that fight elections—it is their leaders who decide electoral success on the basis of personal charisma and vision. In recent years, general elections have become very “presidential” because of the rise of this personality cult—so much so that prime ministerial candidates are declared even before the members of Parliament are elected. Voters, thus, vote for a particular leader, and parties are just a proxy. This is, in practice, the presidential form of government. Moreover, there is a fundamental problem with any electoral democracy—how to keep political parties in touch with the voters? Look at the US presidential elections. Political parties undertake massive voter outreach progra mmes. Presidential candidates, in fact, start their nomination campaigns with town-level voter outreach initiatives.

It is this pressure of connecting to the electorates that will lead to a complete makeover of panchayats in India. Currently, panchayat elections are fought like state or national elections. They are used aggressively to build political constituency. Parties like the Bharatiya Janata Party and the Congress have, of late, used local elections to either foray into the not-represented states or to regain lost political space. This is because any party that has to make political debut or regain space, has to build cadres or a support mechanism at the village level.

Currently, panchayats implement close to 70 per cent of rural development programmes. The elected representatives at the village level use this as an effective tool to build political support base. As women now vote more than men in India and parties are scrambling to woo them, the panchayats are set to become all the more important. Constitutionally, women enjoy 50 per cent reservation in panchayat seats. So, these village-level governments have all the ingredients to make or break a political party’s fortune.

The situation depicted in the beginning unfolded in Kerala back in the early 2000s. The state, though not required to do so constitutionally, allows 40 per cent of state’s budget to be planned by its pancha yats. At that point of time, the then ruling left government undertook a massive campaign to roll out this decision. And it had positive impacts, both in develop mental as well as political terms. It seems logical that in future, panchayats would get the much demanded fiscal autonomy, not as a constitutional mandate but as a political necessity for parties to sustain their personality-based politics.

The article was first published in May 1-15, 2017 issue of DownToEarth magazine under the headline 'Panchayats in presidential India'