Climate-resilient infrastructure such as clean water supply, good toilets and hygiene are crucial for Bhubaneswar to make residents of informal settlements in the Odisha capital resilient to climate change, according to experts.

The eastern Indian state has regularly suffered from extreme weather conditions eg,  Cyclone Fani in May 2019, which disrupted normal life in several areas along the Bay of Bengal coast and even as deep inland as Bhubaneswar.

Disasters induced by climate change are increasing in frequency and intensity, climate and water expert Ranjan Panda, said. Unfortunately, the poor in low-income countries suffer the maximum losses due to disasters.

Compared to the rich, the poor in informal settlements take much longer to recover from natural disasters. Lower-income countries suffered 44 per cent such disasters, but accounted for 68 per cent deaths between 1994 and 2013, a research pointed out.

Access to clean water, good toilets and hygiene are crucial during and after disasters, when the mental and economic conditions of the poor are at the lowest. The state has a large responsibility in this, Panda said.

Bhubaneswar, which, is being promoted as a ‘smart city’, must include provisioning of climate resilient water supply, sanitation and hygiene (WASH) infrastructure. This would stop the spread of diseases and help residents improve their finances sooner.

A faint smell of faeces hung over the only room where Sandhyarani Lenka lives. The 29-year-old had just cleaned up after her five-year-old son who defecated into a toilet bowl that lies open in the 9X12 room, which is used for all purposes including dining.

The slum at the outskirts of the city was completely devastated in the extremely severe cyclonic storm ‘Fani’. Roofs were blown away and individual latrines provided under Swachch Bharat Mission (SBM) were damaged, forcing people to return to defecating in the open.

The 280-odd household slum was created in September 2018 to temporarily shelter the dwellers of Jagannath Basti, a slum adjacent to Kalinga Stadium, a few weeks before the 14th edition of the Hockey World Cup. 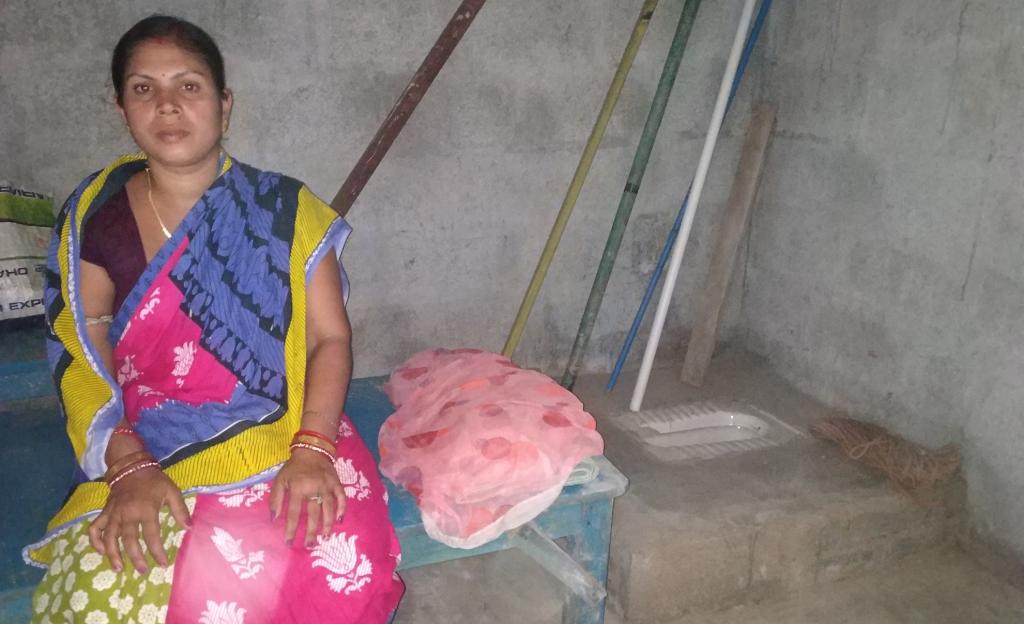 Sandhyarani Lenka at her room in Pandakudia slum, with the toilet bowl located within it. Photo: Pragati Prava

Toilets here are within living rooms. Some are half-walled, others have no walls.

The Rs 8,000 per household SBM fund wasn't enough: “We got a pit dug inside our room and installed the pan for Rs 12,000,” Lenka said. By the time the family could arrange money, Fani played spoil sport. There was no compensation for damaged houses. “We had to depend on private loans for repair,” she said.

The slum-dwellers avoid using the toilets due to the stink they raise. Also, they fear the pits will soon be full. Children use them for ‘emergency’ or at night, Renuka Digal, a 33-year-old resident said.

Her family is among the nearly 70 per cent families there who moved to Bhubaneswar after communal riots in Kandhamal in 2008 and settled at Jagannath Basti. Most built thatched clay huts and gradually converted them into cement-concrete-asbestos structures. Then they were asked to vacate in lieu of 20ftX12ft land and Rs 35,000. Most of them had to exhaust their savings. Many were already in debt when Fani slammed in.

Everybody defecates in the open in Pandakudia in stark ‘open-defecation free’ Bhubaneswar.

“We cannot afford to clean the pit by hiring sewage-cleaning vehicles,” 55-year-old Ranchana Digal, also from Kandhamal, said. “The elderly women don’t feel awkward going out to attend nature’s call. But they get cautious when their daughters and daughters-in-law go out,” she added.

Digal had got her daughter married a few weeks after her family shifted to Pandakudia to ensure that she did not have to go out to defecate in open.

“We have no option but to wash the rags we use during menstruation inside the toilets and hang them on ropes inside to dry them,” said Renuka.

“It's tougher, post-Fani. Earlier, there were a few trees; we could wash the period clothes under them, away from the gaze of the men, and left them there to dry under saris or other clothes. Now the trees are all gone,” she added.

Few women and girls can afford sanitary napkins; around 80 per cent use clothes,” said Parilata Mohapatra, secretary of Self Employed Women’s Association, who works in the slums.

“After Fani, they store the clothes inside their dark, swampy toilets. These get infected by fungus and bugs and reptiles tread upon them,” she added, demanding free sanitary napkins from the government.

The stress multiplies when it rains: The narrow passages between rows of shanties go under water that floods houses. The road connecting the slum with the city also becomes muddy. Cases of vector-borne diseases and diarrhoea rise, the slum-dwellers complained.

‘Water ATMs’ provide 10 litres drinking water per day to each household for Rs 25 a month. If they need more water, they have to buy more cards.

“Though 10 litres is not sufficient for a family, we adjust. None of us bought more than one card,” Renuka said. 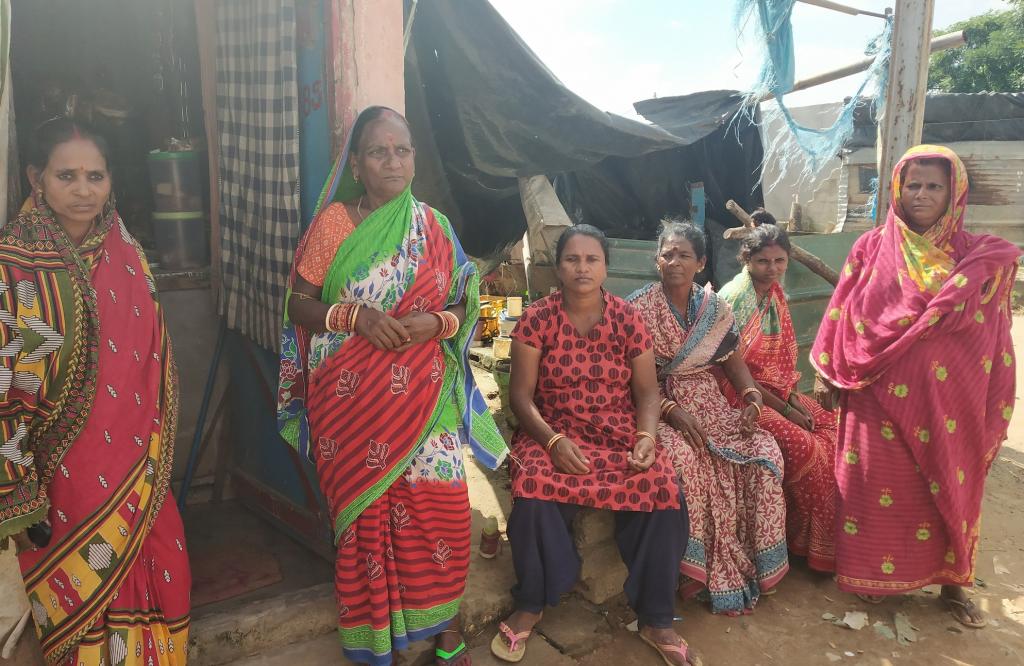 The women of Pandakudia pose outside their shanties. Photo: Pragati Prava

“We have drafted a disaster risk reduction (DRR) framework and after we get it finalised, we will prepare a DRR roadmap that will guide the state departments in planning their projects,” Pradeep Kumar Jena, special relief commissioner (SRC) and additional chief secretary, disaster management, Odisha, said.

The Bhubaneswar Municipal Corporation (BMC) is working in coordination with other departments to make the city resilient to disasters, BMC Commissioner Prem Chandra Chaudhary, said. He added that the buildings sanctioned by the Bhubaneswar Development Authority were resilient structures.

The slums, however, are vulnerable. “We have eight affordable housing projects going on to house all the 80,000 families residing in slums in a phased manner,” Chaudhary said.

“Fani was a lesson for us. We are now taking measures to install generators in all major water supply sources – Palasuni, Mundali, Bhuasuni and Saantarapur – because, for uninterrupted water supply, uninterrupted power supply is also required,” said BMC’s City Engineer Debasundar Mohapatra.

The SRC should steer an initiative to ensure convergence of all these departments to build climate resilience for the urban poor, said Panda.