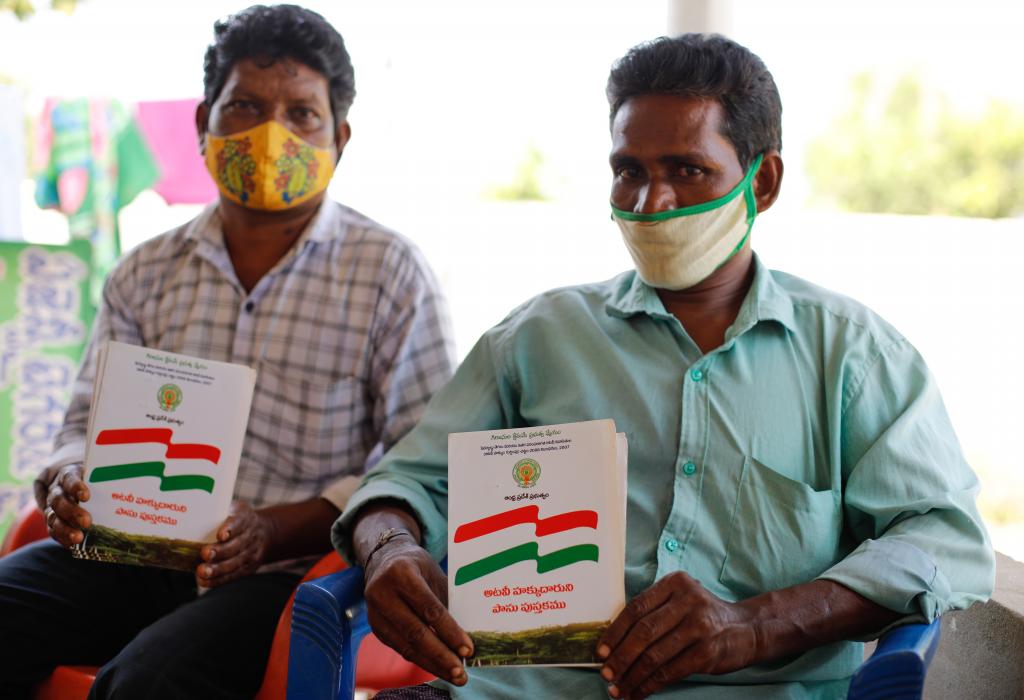 Chimasankurudu Madakam (55) and Kannapraju Madakam (49) have not been able to exercise their land right despite having land deed (in photo). Photo: Vikas Choudhury

The eviction of residents from 222 villages on the Godavari river basin for the Polavaram dam project tells the story of India’s tribal families fighting a losing battle for their land and forest rights.

On March 27, 2021, Bariya Nagaraj’s was among 72 families forcefully shifted from their home in Agraharam village in East Godavari district to a rehabilitation colony in Indukuru village, 30 km away.

“The police came with JCB earthmover machines to raze down our homes,” Nagaraj recounted, his eyes moist. “They asked us to collect our belongings and threatened arrest if we resisted.”

On their way out, they disconnected the water and electricity supply and dismantled the village borewell, so that we could not return, he added.

Nagraj was among the approximately 56,504 tribal families already displaced or set to be displaced when the Polavaram dam project is operational in April, 2022. 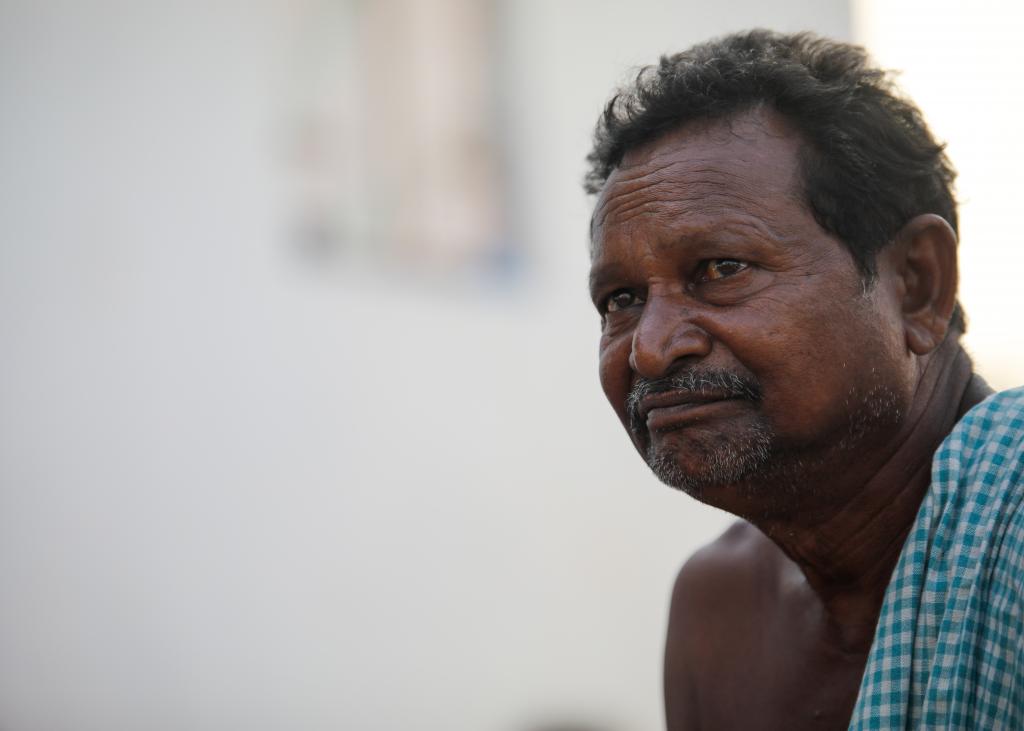 Bariya Nagraj and his family was evicted from Agraharam village on March 27, 2021. Photo: Vikas Choudhury

The 222 affected villages are notified scheduled areas because they have a considerable tribal population. The residents are marginalised and their rights are protected under various laws.

Recognition of their forest rights is a major concern among the tribal population. The Scheduled Tribes and Other Traditional Forest Dwellers (Recognition of Forest Rights) Act — popularly called the FRA (Forest Rights Act), enacted in 2006 — recognises the rights of the forest-dwelling tribal communities and other traditional forest dwellers to forest resources, on which these communities were dependent for a variety of needs, including livelihood, habitation and other socio-cultural needs. But since the project started in 2006, there has been a huge gap in ensuring these rights.

The act came into force in 2006 but many of the displaced families were identified for rehabilitation much earlier. Even though they have been rehabilitated only recently, local authorities had allegedly been delaying awarding them forest rights because of the imminent resettlement.

When it became clear after 2005 that many tribal communities will be displaced by the Polavaram dam project and many areas are going to be submerged, the government started delaying or stopped sanctioning ‘pattas’ (land deeds) for the cultivated forests land on one pretext or the other. This practice continues.

Over 200 families from three tribal communities — Koya Dora, Konda Kamari and Konda Reddy — shifted to Indukuru around nine months ago. The families were dependent on the forest produce for their livelihood but their new address has no forest area in the vicinity. Those who have ‘pattas’ don’t know what to do with them anymore.

The residents of Agraharam feel betrayed by the authorities. They allege that shortly after the village was identified for rehabilitation in 2006, they had zeroed in on land away from forests for rehabilitation.

“Late last year, the district officials came with the police and informed us that they had acquired land in Indukuru village and that our new houses were ready,” said Badram Kunjam, a resident. Their ‘new home’ is in a colony built on a low-lying area that floods during monsoon and that no work is available in the vicinity, he added.

Ravi Rebbapragada, executive director, Samata, a social justice organisation working for the rights of tribals, calls it a historical injustice:

Our nation celebrates ‘Azadi ka Amrit Mahotsav’ to commemorate 75 years of progressive India. On 15th November, we mark the birth anniversary of great Adivasi freedom fighter Birsa Munda and the day is observed as ‘Janjatiya Gaurav Diwas’ to pay our tributes to the sacrifices of Adivasis. But the Polavaram irrigation project, at the same time, is displacing the most significant number of Adivasis by any irrigation project in India so far. Despite Samata judgment and several constitutional rights and protections, the displacement is being implemented in an unjust way. Though in comparison to previous dam projects, there is improvement in the government dealing with the data, it will still go down in history as historical injustice to Adivasis in India.

Besides, many families also had agricultural land. The compensation plan mandates that the families should be allotted alternative agricultural land near their rehabilitation colony. But the reality is different.

“The farmland allocated to me has also been given to at least two other displaced families,” said 60-year-old Talur Akamma.

A team of the National Commission for Scheduled Tribes that visited some of the rehabilitation colonies between August 24 and 28, 2021, found that in many places the government had provided community land for agriculture, even though most families demanded individual land rights.

The families have been pursuing the matter with the authorities but haven’t made any progress in the last nine months.

The Land Acquisition Act, 2013 categorises people who have been granted forest rights as ‘land owners’. It mentions that the rehabilitation development plan shall also contain a programme for development of alternative fuel, fodder and non-timber forest produce resources on non-forest lands within a period of five years, sufficient to meet the requirements of tribal communities as well as the scheduled castes.

One can argue that it has only been nine months for the Indukuru families and these things take time. But the case of those shifted to rehabilitation colonies as early as 2015 provides no solace.

Forest and land rights of Chimasankurudu Madakam (55) and Kannapraju Madakam (49) who were displaced from Mamudigundi village and shifted to a R&R colony have not been settled in six years.

The brothers were among five tribal families who had 20.70 acres of land with pattas in the village situated very close to the dam site in West Godavari.

But the papers were of no help as they have not been able to exercise their land rights in the settlement some 30 kms away from the cultivable forest area they were pushed out of.

Since 2015, they have been making rounds of the district collectorate for land-for-land compensation. “We had good cultivations of cashew, mango, sitaphal, tamarind and shikakai and would make Rs 1,00,000 a year selling just mango and cashew,” said Kannapraju, who had 3.06 acres.

The families would also depend on the forest for firewood, honey, bamboo, wild vegetables, and mushrooms.

Now they have been reduced to agricultural labourers in nearby fields. “We want land that we can cultivate on,” he said.

Back in their village, tunnels to transport water to Visakhapatnam and Vijaywada cover the fertile forestland that was once their own.

All they got in the name of the compensation was a settlement package of Rs 120,000 each under the former land acquisition act. The current act was passed in 2013 but implemented much later in the project-affected areas.

Another problem that the rehabilitation packages have fundamentally failed to address is that for most tribal families, the Godavari and the forests were an integral part of their everyday lives, cultures and traditions.

This was also observed by the National Commission for Scheduled Tribes team that visited some of the colonies earlier this year. The team found that none of the colonies were conceptualised with tribal traditions and cultures.

“The location of the colony is decided on the availability of land to be given as land-for-land (agricultural land) near the resettlement colony,” said O Anand, project administrator, Polavaram Irrigation Project.

The problem is we are looking at the extent of acquisition for resettlement of 150,000 acres, out of which 35,000-40,000 acres has to be acquired for land-for-land, he added. “We may not be able to get the land which is very near forests in many of the cases.”

The authorities can acquire land only in scheduled areas for the displaced tribal population and need to have that land near the colony itself, Anand said.