Now, government has promised ‘world’s largest health scheme’ whose implementation is not possible, at least in 2018. 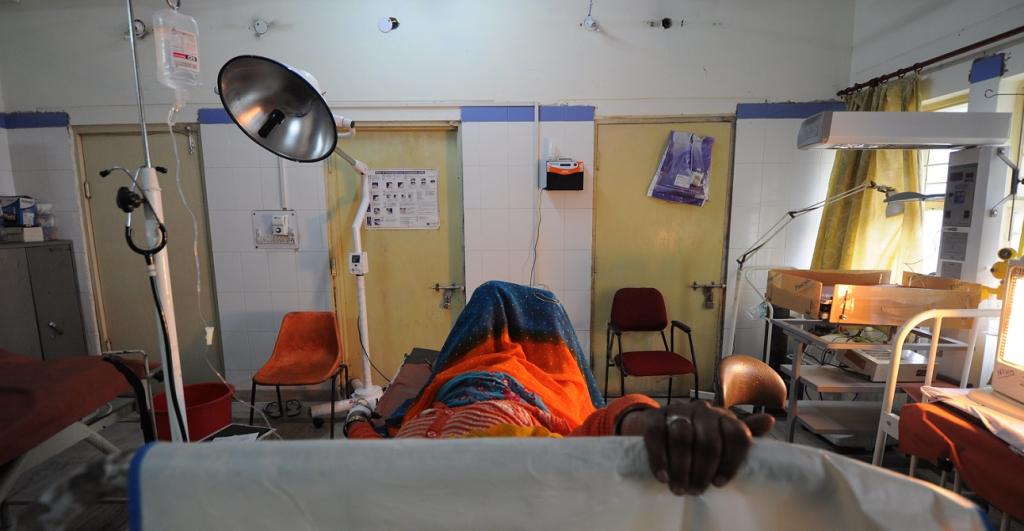 Budgetary cuts, mismanagement in hospitals and preference to private sector over public sector are issues that are having serious ramifications on public healthcare. Credit: Sayantoni Palchoudhuri

Bharatiya Janata Party (BJP)-led National Democratic Alliance (NDA) used the phrase ‘quality health for all’ in its manifesto when Narendra Modi was pushing for his prime ministerial candidature in 2014. It gave hope to many who were campaigning for robust healthcare system in India. However, with the government completing four years in office, nothing has changed on the ground. What people generally remember is the worrying trend of hospital deaths, especially the incidents like Gorakhpur where 70 children died due to lack of oxygen.

In its manifesto, BJP had promised 'health assurance to all Indians'. After four years, it is still a promise but in new form.  Now, government has promised ‘world’s largest health scheme’ whose implementation is not possible, at least in 2018.

Those who were impressed with BJP manifesto regarding health, were taken by surprise when, within months of assuming office, government slashed 20 per cent of central funds committed to the health sector.

A document prepared by Wada Na Todo Abhiyan, a public campaign which monitors government’s claim, says that 2017-18 budget was less than the 2011-12 budget, if inflation is adjusted.

According to the report, overall allocation to the Ministry of Health and Family Welfare (MoH&FW) saw a marginal increase from Rs 32,819 crore to Rs 37,061 crore in 2016-17. After adjusting inflation, the increase is a mere five per cent per capita.

While the union budget of 2015-16 announced a 5.7 per cent cut in total allocation to the health sector, the 2016-17 budget allowed a marginal rise of just five per cent when adjusted for inflation and there was similar marginal increase in 2017-18 budget too, the report says.

Despite government’s claims on health, the budget received for the National Rural Health Mission and the expenditure thereunder was only about 40 per cent of what was envisaged for full revitalisation of the NRHM framework.

In the last budget, government has slashed budget of crucial programmes, including the Reproductive and Child Health (RCH) programme, which is a major source of funds for maternal and child health. This budgetary cut happened when India has to reduce child and maternal mortality rate to meet its commitment under Sustainable Development Goals. The budget for RCH has been slashed by 30 per cent this year from Rs 7,545 crore in 2017-18 (revised) to just Rs 5,253 crore.

The National Health Mission (NHM) is the largest programme to support and upgrade public health services across rural and urban areas of the country. Compared to allocation of Rs 30,801 crore in 2017-18 (revised estimates), the budget for NHM has been reduced this year to Rs 30,129 crore.

In 2017, the union cabinet approved the National Health Policy (NHP). Though, the policy admits that “growing incidences of catastrophic expenditure due to health care costs” are estimated to be “one of the major contributors to poverty”, the policy faulted on two different areas: making budgetary commitment and making healthcare a justiciable right.

Under NHP, it was proposed that the government budget will increase from 1.15 per cent of GDP to 2.5 per cent by 2025. The draft policy, which appeared in 2015, promised that this target would be achieved by 2020. It also committed to making healthcare a justiciable right, however, when the final document emerged, there was no indication that the promises will be met.

Finance minister Arun Jaitley announced National Health Protection Scheme (NHPS) in 2018 with much fanfare and many called it ‘Modicare’. Its official name is ‘Ayushman Bharat’ which is supposed to offer Rs 500,000of health insurance to 10 crore families of this country.

Health experts criticised the announcement for several reasons, including limited budget allocation and lack of planning. The same government has announced insurance scheme in 2016 also but nothing changed on the ground.

Keeping ‘health for all’ claims in mind, the biggest concern is that the scheme will not bring much relief to people because it will only cover hospital care packages, while in reality, much larger burden is posed by illnesses that do not require hospitalisation or are not covered by the insurance package.

The central Clinical Establishment Act (CEA, 2010) is meant to regulate private hospitals in various states. Private hospitals overcharging patients for treatment of common diseases like dengue is often reported in the media. The present government has not been able to rein in these private hospitals.

In fact, a report issued by Jan Ayogya Abhiyan (JAA), a Maharashtra-based public health campaign says that the CEA rules include the provision of regulation of the charges to be levied by hospitals. However, this provision has not been implemented in any of the BJP-ruled states in which this law has been made applicable.

Further, the essential standards under CEA, which are required to fully implement the act, are ready but have not been notified by Centre for more than three years now! As a result, the Clinical Establishment Act still remains largely on paper even in those states that have adopted it, says the JAA.

Price control of stent prices is a significant development that has taken place in the current regime. The BJP government in the centre has been taking credit of this at several platforms.

However, the credit for this should be given to Delhi High Court order and advocate Birendra Sangwan who had filed a PIL in 2014. This was supported by a campaign led by All India Drug Action Network (AIDAN).

While the Centre likes to claim its role in controlling stent price, the truth is that it did not even respond to the Delhi High Court order on capping prices of stents. It was only after a contempt of court petition filed in July 2016 that the National Pharmaceutical Pricing Authority took steps and capped the prices of cardiac stents.