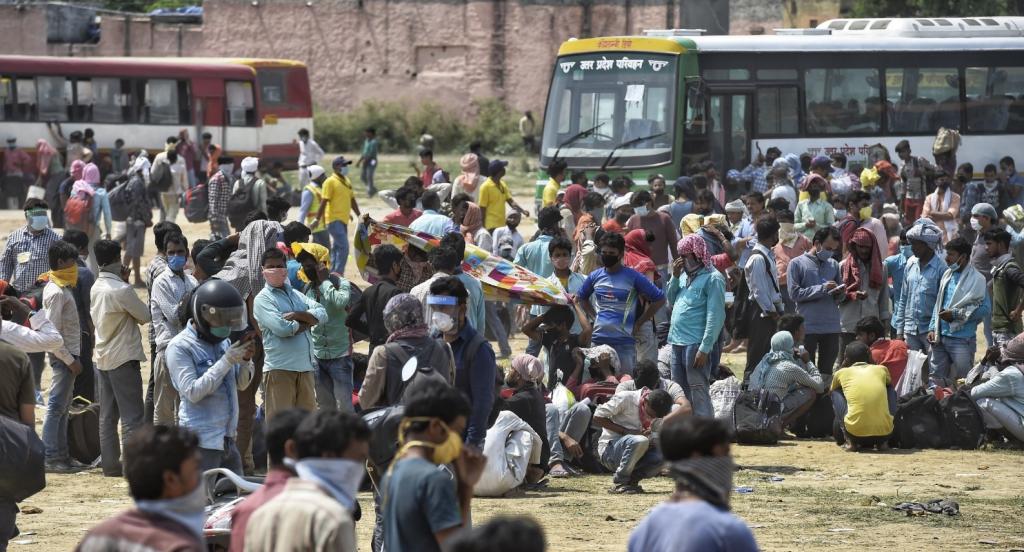 Down To Earth's reporter Vivek Mishra travelled from Delhi to Shravasti along with migrant workers returning home after the COVID-19 lockdown. Photo: Vikas Choudhary / CSE 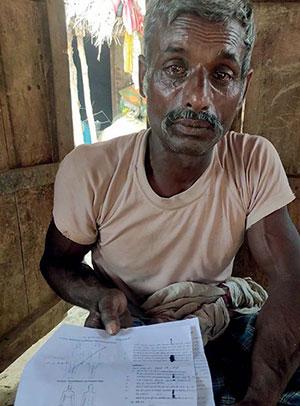 I left Delhi on May 16, 2020 and after three days of walking and hitching rides, reached Ratanpur Kunda village in Shahjahanpur, Uttar Pradesh, on May 18.

A group I met on my way had allowed me to accompany them to their village. Brij Kishore and Jagdish, brothers working in Haryana, were returning with their families and friends.

I was curious to see what awaited those who returned to their villages after travelling hundreds and thousands of kilometres. We reached their home in Ratanpur Kunda at about 11:30 pm and crashed.

9:00 am: My interactions with the family made me realise that the main source of work in the village at a short notice could only be daily wage jobs under the Mahatma Gandhi National Employment Guarantee Act (MGNREGA).

Rajbir, who lives next door and returned to the village from Delhi in March, told me that a road was being laid on the outskirts of the village and people were being employed to work under MGNREGA.

He decided to go and I accompanied him. We reached there to find that the contractor needed just seven-eight people. The village has about 500 families and almost each has a member who returned after the lockdown and would require a job.

12:00 noon: Rajbir and I returned home empty-handed. I inquired about people who were earning from other means. I visited Ram Gopal, 70, who lives nearby and earns Rs 200 a day by tilling land.

I also chatted with Sarju, one of the relatives to return with Brij Kishore and Jagdish after the lockdown. Sarju had returned from Delhi after getting four fingers of his right hand severed in an industrial accident in December 2019.

His employer had paid for his treatment and the fingers had been reattached but the grip was somewhat lacking. The lockdown started as he was trying to begin work again and he had to return.

9:00 pm: There was ruckus in the house, with Brij Kishore and Jagdish searching for something. I enquired to find that the families needed to get their ration cards, Aadhaar cards and other documents in order to claim ration the next morning.

Though we had managed to get ration the evening we arrived, it was not going to be enough, they said. Getting more ration quickly was necessary before it got distributed. 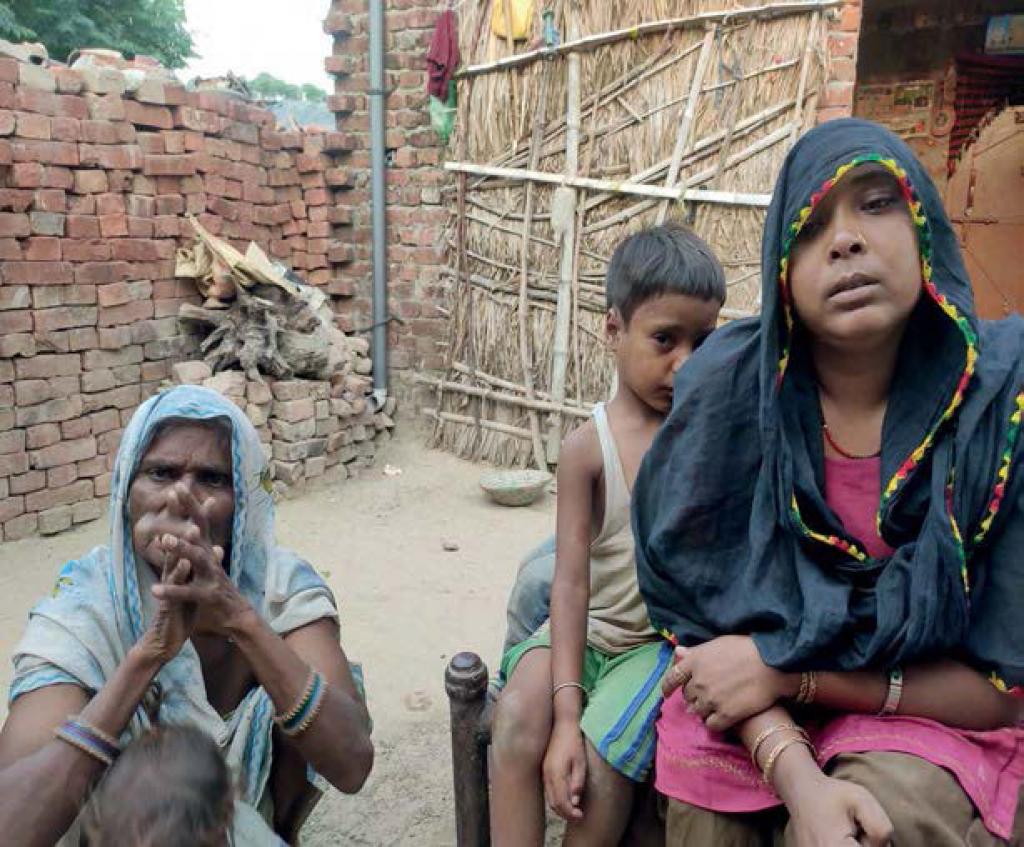 6:00 am: I left for Lakhimpur Kheri (see ‘The route’) — the next district that I heard had a large population of workers returning. Brij Kishore dropped me off to the main road from where I walked about 30 km to reach the bus stand in Shahjahanpur. I wanted to try my luck and find a ride.

11:30 am: I reached the bus stand and was glad to see buses lined. I asked around but officials told me that the buses were only for ferrying people to and from the quarantine centre to nearby areas.

I decided to continue walking towards Lakhimpur Kheri. On the way, I met Qahar Singh, who was headed to Bichhiya village of Bahraich — a district little further from Lakhimpur Kheri.

11:00 pm: We walked and hitched rides to travel another 60 km to cross the Shahjahanpur-Lakhimpur border. It was pitch dark and we were extremely tired. We decided to spend the night at one Hanuman dhaba at Rajapur chowki in Lakhimpur Kheri.

11:30 pm: A group of 18 workers arrived at the dhaba, asking for food. The owner said it would be Rs 130 for dal-roti. It was too expensive for them. I shared biscuits with one of them named Kaushal, who seemed to be losing senses due to exhaustion. It was not possible for me to pay for everyone’s meal.

12:00 midnight: Someone from Qahar’s village arrived on a motorcycle and the two left. I took his contact number and said I will see him in a day.

Kaushal and his group wanted to keep moving. I went to a nearby police chowki to request officials to help them arrange a vehicle. Initially, the chowki in-charge wanted us to go to the quarantine centre to get checked and leave the next day.

When we persisted, he yielded and asked the group to wait on the other side of the road. I returned to the dhaba and slept on a cot right next to the highway. At around 2:30 am in the morning, I woke up to a racket and realised it was the same group going past the dhaba on a truck, waving at me and shouting my name. 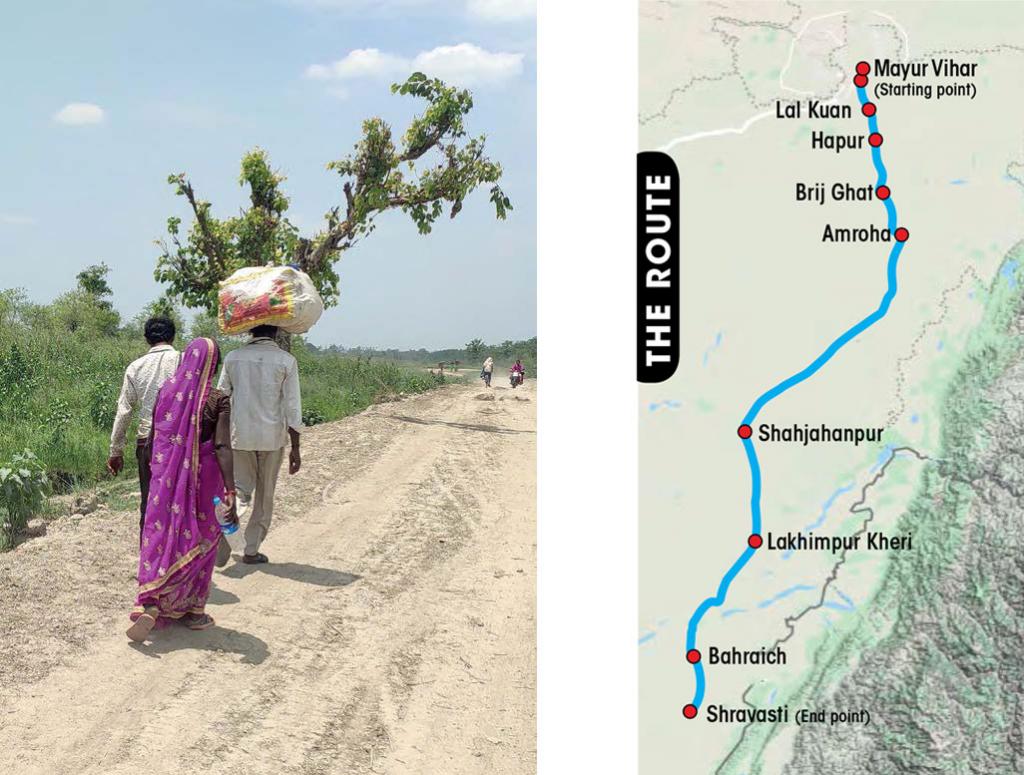 6:00 am: I left for Bahraich. Since I have lived and worked in Bahraich I have friends and acquaintances in and around the district. I walked about 35 km to a relative’s place.

2:00 pm: Too tired and feeling a little weak upon arrival, I rested for the rest of the day.

On May 22, I went to Bichhiya village to meet Qahar, who told me that the village residents did not allow him to enter when he reached there early morning on May 20. He was asked to report to the quarantine centre at Sijauli and he spent the day getting checked.

I enquired about his plans and he said he would not return to Delhi this year. He was looking for work as a raj mistri (mason). At around 7:30 pm, I left for my relative’s place and reached home at 11:00 pm.

I spent May 23 to May 26 looking for people and stories. I heard of Mukesh, 17, who was travelling from Ludhiana, Punjab, to his village Bangha in Shravasti and died on the bus close to the village. I also heard of a worker, Insaf Ali, who managed to travel from Mumbai to his village Matkhanva, also in Shravasti, but died the day he arrived. I decided to meet their families.

12:00 noon: I arrived at Bangha to meet Ram Chhabiley, father of Mukesh. The man was completely broken. This was the story he told: Mukesh started on his bicycle from Ludhiana and rode it till Muzaffarnagar in Uttar Pradesh, where the police made him board a bus to Bhinga, the town near which their village is located.

Mukesh fell ill on the way. The passengers raised alarm but the bus driver asked them to shut up, with the threat that he will put the bus in reverse gear. In Bhinga, Mukesh was declared dead on arrival at the quarantine centre.

12:00 noon: I arrived at Insaf Ali’s home in Matkhanva. His wife, Salma, said that Insaf went to Mumbai last year to be able to repay a loan of Rs 55,000 that they took when she was pregnant. On April 13, he left Mumbai, paying Rs 2,500 to a truck driver to take him to Uttar Pradesh.

The diver dropped him off at Jhansi, from where Insaf walked to Bahraich. He arrived on April 27 and went straight to the village school that was serving as the health centre. He found there was no food or medicines.

He felt sick and telephoned Salma for help, who went to the village pradhan for assistance. The pradhan, Salma said, told her that all this was just an excuse for him to enter the village. At around 11:00 am the same day, Insaf died. The post-mortem report stated he was COVID-negative, the cause of death unknown.

This is the final article of a two-part series. Read the first part here