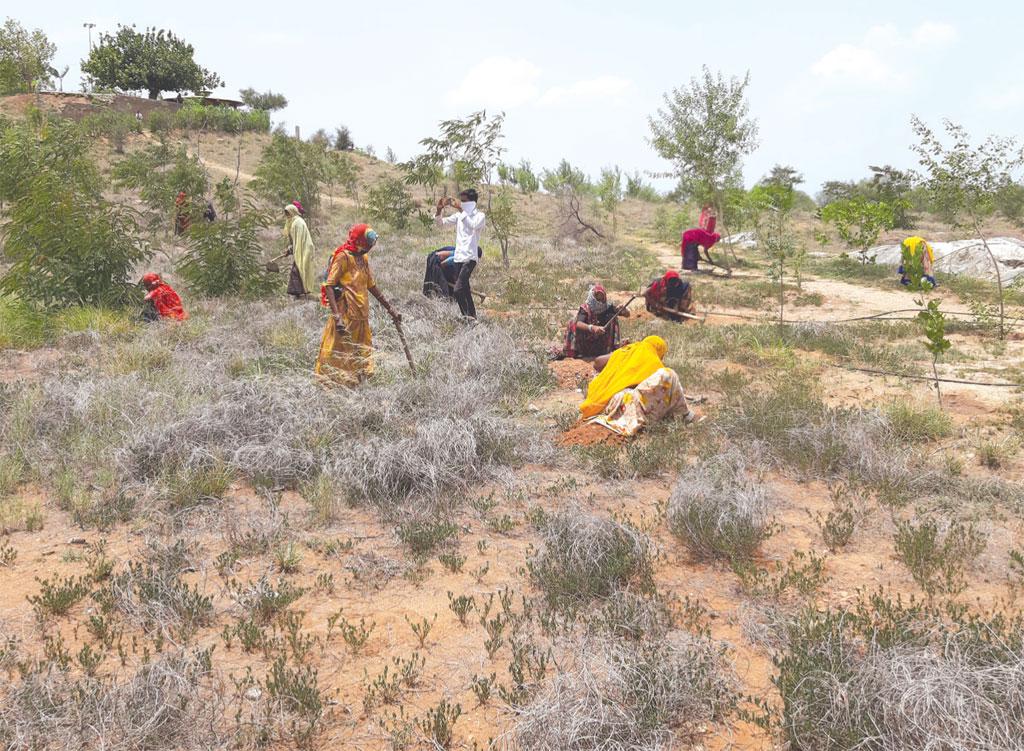 It was long known. But the novel coronavirus disease (COVID-19) pandemic has, in a way, established the potential of the Mahatma Gandhi National Rural Employment Guarantee Act (MGNREGA), 2005, as an instrument of public policy that can reduce the impact of calamities on rural livelihoods. Since the pandemic gripped the country, media reports have regularly highlighted how the programme has provided, among other things, employment to the highest number of households, surpassing the previous record in 2011-12.

The liberal proponents of MGNREGA have underscored how it has provided social protection to the poor households in rural India, particularly to those who substantially depend on unskilled manual labour for sustenance. Anecdotal evidence shows how the programme has offered a safety net to tens of thousands of migrant labourers, who were forced to return to their native villages after the nationwide lockdown was abruptly imposed in the last week of March to curb the spread of covid-19.

The Union government has also acknowledged the role MGNREGA plays in mitigating rural distress by allowing its implementation, right from the second fortnight of April and subsequently, by allocating an additional sum of Rs 40,000 crore over and above the budget estimate of Rs 63,000 crore. However, critics of the programme argue that there are some inherent flaws in the design of schemes under MGNREGA, which limit its effectiveness as a tool of poverty alleviation.

One, the programme is primarily targeted at the states with high incidence of poverty. But because of its “open-endedness” better-governed states manage to capture a much higher share of the spending under MGNREGA despite their relatively lower levels of poverty. For instance, in 2014-15, the combined share of the six high poverty states (HPS) — Bihar, Chhattisgarh, Jharkhand, Madhya Pradesh, Odisha and Uttar Pradesh — in the total expenditure was only half of their share of rural poor. MGNREGA spending in Bihar that year was Rs 1,056.33 crore, whereas Tamil Nadu with less than one-fifth of Bihar’s rural poor spent Rs 3,623.89 crore, or three-and-a-half-times more than the latter, on the programme.

The second design flaw relates to the quality of assets created under the programme. Though the statute mandates the creation of “productive assets with prescribed quality and durability” as one of the core objectives of MGNREGA, a structured quality monitoring mechanism has not been embedded in the programme. As a result, it is contended that the programme is overwhelmingly focused on short-term unproductive employment generation, with a marginal contribution to the long-term objectives of soil and water conservation, strengthening the livelihood resource base of the rural poor and drought-proofing.

Some operational issues also continue to affect implementation of the programme. Arguably, the most serious implementation problem pertains to the inordinate delays in payment of wages to the workers despite the legal requirement of ensuring it within 15 days of closure of the muster roll. A 2018 study, led by Rajendran Narayanan of Azim Premji University, Bengaluru, based on a large sample survey, found that in 2017-18, only 32 per cent of wage payments were made within the prescribed 15 days.

Therefore, while evaluating how MGNREGA has contributed to rural livelihoods during the ongoing public health crisis, we need to analyse whether the programme has made some course corrections over the years to address these structural and operational hitches.

Let us begin with the reported spike in employment generation under the programme during April-July, which is usually the peak period of demand for unskilled jobs in rural areas. During the current financial year of 2020-21, the overall employment in terms of person-days during April-July increased by nearly 50 per cent, as compared to the corresponding period in 2019-20. But the increase has been substantially higher—81 per cent — in the six HPS states. When compared with the other states, the share of HPS states in the total employment generated across the country has risen from 27.83 per cent in 2014-15 and 30.51 per cent in 2019-20 to 36.81 per cent in 2020-21. 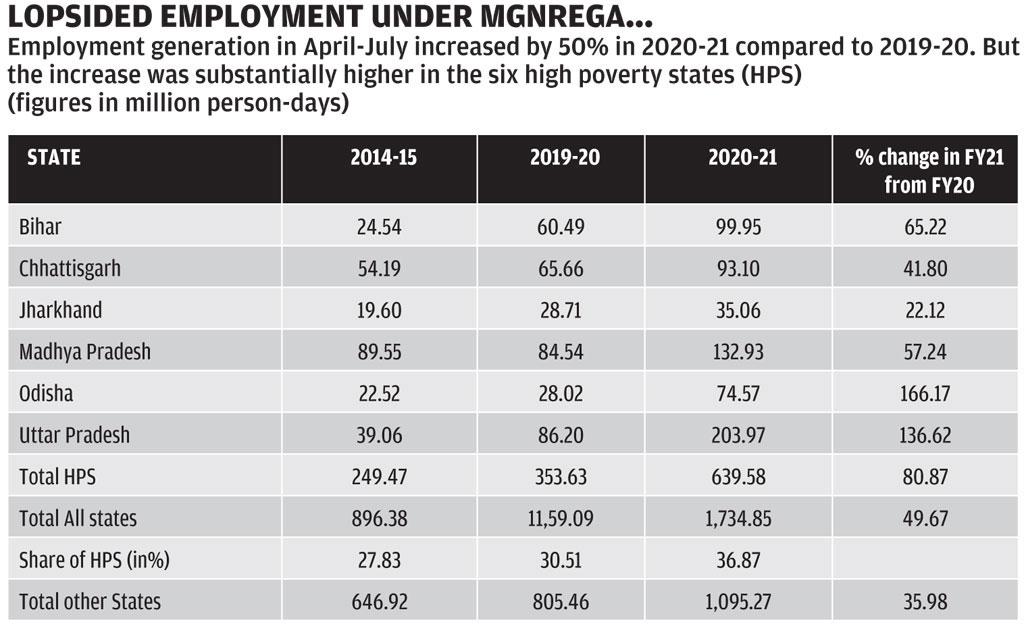 But the figure is still well below the states’ share in rural poverty. These numbers point towards an acute job crisis in rural areas during the lockdown period, particularly in poorer regions. Since non-farm jobs were not available during the lean period either in the formal or informal sectors, unlike in a normal year owing to the restrictions imposed by the lockdown, the labour-dependent households had no option but to seek subsistence support under MGNREGA.

An analysis of demand for MGNREGA works during the peak month of June between 2018-19 and 2020-21, also corroborates this conjecture. While the overall demand for MGNREGA increased by 71 per cent in June 2020-21, as compared to the same period in 2019-20, the increase was substantially higher in all the HPS states, except Chhattisgarh. The surge in demand was above 200 per cent in Uttar Pradesh and Odisha.

Another notable finding is that though there has been a significant improvement in the share of Bihar and Uttar Pradesh in the aggregate employment generated during 2020-21 as compared to 2014-15, it is disproportionately lower in comparison to their share in rural poverty (see ‘...Has only led to inequitable benefits for poor states’).

This was first published in Down To Earth’s State of India’s Environment Report 2021. Views expressed by the author need not necessarily reflect those of Down To Earth.