A model Haryana village, which had pulled itself out of poverty by managing natural resources, shuns the very model of development 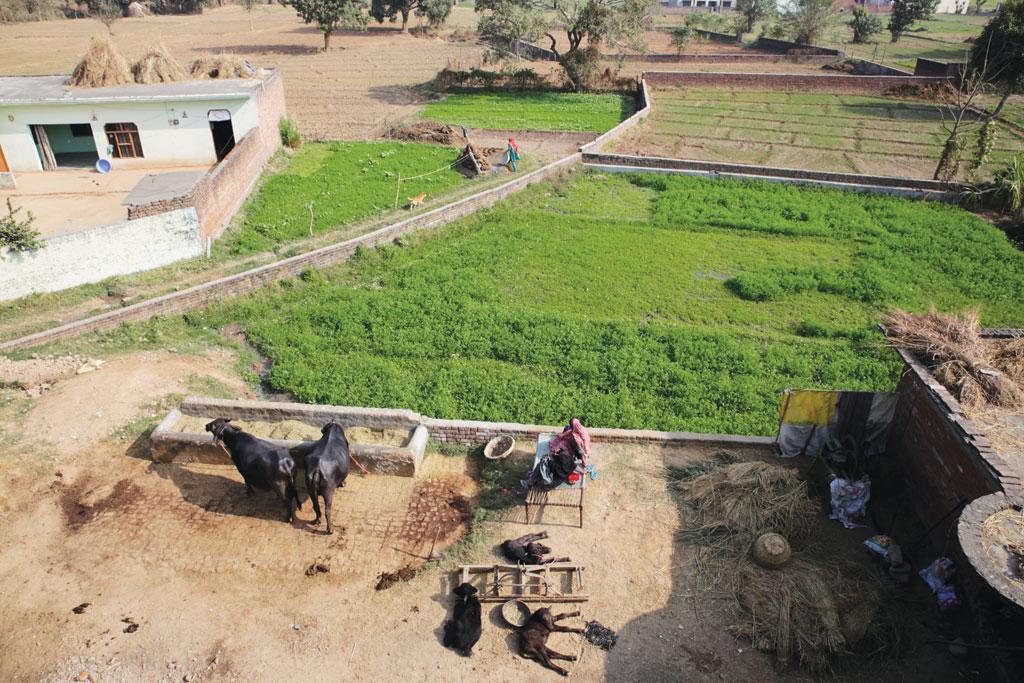 Most people in Sukhomajri have abandoned farming and are rearing livestock or migrating to neighbouring towns to work in brick kilns (Photo: Vikas Choudhary)

CALL IT a breakdown of people’s connection with nature or the result of an inherent flaw in government programmes, Sukhomajri is losing its sheen as fast as it had shot to fame in the 1980s. People from at least 120 countries have visited this village in Haryana’s Panchkula district to learn how community management of forest and water can pull a village out of poverty and make it self-sufficient. But chakriya vikas pranali, or cyclical mode of development that had brought it prosperity, seems to have jammed.

In this model, the revenue earned from village reso urces is invested back into its development. But if the Haryana Urban Development Authority (HUDA) has its way, the proposed 7.3 km bypass on the Panchkula Shimla highway will deal a death blow to this village.

The transition of Shukhomajri from poverty to prosperity can be traced back to lake Sukhna near Chandigarh that had almost silted up in the 1970s. Scientists with the Central Soil and Water Conservation Research and Training Institute (CSWCRTI), Chandigarh (now under the Indian Instit ute of Soil and Water Conservation, or ICAR), led by P R Mishra, observed that run-off from the denuded Shivalik hills of Sukho majri was a cause of siltation in the lake. To check soil erosion, the CSWCRTI team constructed four check dams and planted trees on the hills. Mishra motivated farmers to refrain from extensive grazing in the area. But conservation meant little to the people who could barely meet food, fodder and fuel requirements from the hills and depended on rainfed crops. They agreed to cooperate in return for dam water. And in five years, the community saw improvement in their incomes from higher crop yields, forage grasses like bhabbar and mungri, and from rearing livestock. Under the guidance of Mishra, the pioneer of chakriya vikas pranali, they formed Hill Resource Management Society (HRMS) and regulated the use of water and forest resources. HRMS levied a fee on water users, sold bhabbar grass to people and paper mills and leased ponds for pisciculture. It used the revenue to maintain the dams and their distribution channels and for village development. In the 1990s, it became India’s first village to pay income tax.

“In many ways Sukhomajri was the first instance of challenging the top-down model of development,” S P Mittal, one of the scientists who started the project, had told Down To Earth (DTE), which has been tracking developments in Sukhomajri since the 1990s. But recently, when DTE visited the village after 10 years, an utter disinterest in the model was palpable among people.

Most households have replaced their brick-and-cement houses with posh multi-storey buildings and parked their newly bought cars in front of the houses, but their fields are lying fallow. Only 16 hectares (ha) is under farming compared to 51 ha in the kharif of 1999-2000. Those growing crops depend on borewells as three of the four dams have silted up. “Command area of the functioning dam has reduced to 6 ha from 20 ha in the 1980s as most of its distribution channels lie defunct,” says Surinder Singh, technical officer with ICAR. This year, it did not have enough water due to low rainfall. Krishna Singh, who depends on the dam for irrigating his 0.2 ha, says, “I had to buy water from a neighbour’s borewell for Rs 50 per hour. The dam water used to cost me Rs 23.” Six borewells have been dug in the village in the past decade, says Gurmer Singh, village sarpanch. Groundwater level, which had shown signs of improvement during the 1970s-80s, has started plummeting.

With few takers for the dam water and bhabbar grass, HRMS’ earnings have significantly reduced—from Rs 1.7 lakh in 1996 to Rs 10,000 in 2016-17. “HRMS members have not met in the past 10 years, let alone hold election or meeting on village development works,” says Gurmer Singh, who has been heading the society for 10 years, adding that people have lost interest in the model.

Was this the reason people sold their farmlands to HUDA when it approached the village in 2012? Gurmer Singh disagrees. “HUDA plans the bypass road over our dams and farmlands. Initially, we were reluctant to accept its proposal. But when we came to know that the Panchkula municipal corporation (Sukhomajri came under it 10 years ago) had planned to transfer the land, we accepted HUDA’s proposal,” he says. “Our land was anyway lying fallow due to lack of irrigation,” says Abhiram Singh, who has sold 0.4 ha to HUDA. “I have received Rs 40 lakh and will receive more in coming years,” he adds. Using the money, he has bought a car and a piece of farmland in a nearby village.

Surinder Singh says once ready, the bypass road will put an end to the model project and its objectives. “With the destruction of the model, silt will again start flowing into Sukhna lake,” warns Mittal.

Sukhomajri’s prosperity had prompted the state government to replicate the model in several nearby villages. But an analysis by DTE shows that the model has failed in almost all the villages. One such village is Bunga, where a massive earthen dam, the largest the in the state, was built to irrigate 243 ha. It has silted up and farmers now depend on water from borewells. “Ground-water level has dipped from 45 metres below the ground level in the 1980s to 200 m in recent years,” says Rupesh Kumar who buys water for Rs 50 per hour. “People’s income has reduced by 40 per cent in the last 10 years,” says Krishan Singh, sarnpanch of Bunga.

Does this indicate a flaw in the model? Madhu Sarin, Chandigarh-based social activist who works on natural resource management, says the model is flawless. The problem in Sukhomajri stems from the fact that HUDA acquired farmlands for road despite laws in place to prevent land-use changes. Besides, implementers of the model did not train people to maintain the water distribution system. A K Tewari, head of ICAR, says, “This is not possible for us. Once the water harvesting structure is ready, the panchayat should take over its management and implement the model of secured livelihood,” he says, adding that lack of funds is the reason behind the model’s failure.

Whatever be the cause, if the Sukhoma jri model fails, it will leave rural India bereft of the hope to achieve prosperity while conserving natural resources.

This story was published in the February 16-28 issue of Down To Earth magazine under the headline " Sukhomajri falls apart".