The flame of forest rages on 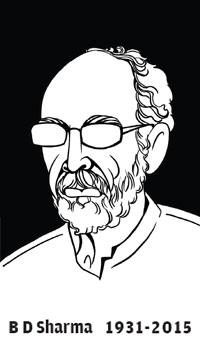 I first heard about B D Sharma while doing my first assignment for this magazine in September 1997. When travelling across the tribal district of Jhabua in Madhya Pradesh to report on a watershed development project, everybody from the district collector to a tribal head of a remote village asked me: do you know Sharmaji? Soon I realised I must know Sharmaji if I wanted to understand tribal affairs in the country. Nearly a month after returning from Jhabua, I got the chance to meet him at the side event of a conference in Delhi. Since then, Sharmaji had been a source of knowledge that sharpened my reportage and brought perspective to my and this magazine’s readers’ understanding of tribal affairs.

Sharmaji, a former district collector of undivided Bastar and by far the most authoritative voice on tribal governance in the country, died on December 6 at the age of 84. He quit the Indian Administrative Service in 1981 because of disagreement with government on several policy issues involving tribal communities. However, as he took on active advocacy for self-rule for tribal population, he was accepted back by various governments as an adviser.

What made Sharmaji a powerful voice was his vast experience on the ground as a bureaucrat and wide engagement with tribal and civil society groups over three decades. Often this unique combination of experiences helped governments to roll out crucial laws, like the Panchayats (Extension to Scheduled Areas) Act, 1996 (PESA). Since the enacting of PESA, he took up campaigns and active engagement with governments to implement the law in letter and spirit. He travelled across the country’s tribal areas with translated copies of PESA and explained to local communities its importance. His one-point agenda was to revive the village republics of yore. “The tribal people are the most democratic people on earth,” he would argue. In recent times he was disappointed that states did not even issue the guidelines to implement PESA. Not somebody to concede defeat so easily, he would not stop at uttering a few words of disappointment, but take the pen and write a letter to the prime minister or the President to push for their intervention.

In his lifetime, he witnessed a new generation of social activists coming to the fore. Though very shy to hog the limelight, he would never miss an opportunity to interact and engage with the new generation of tribal activists. Many of the activists disagreed with him. “At least we are still debating the tribal governance issue” was his standard line to end a heated discussion. “Even during the British Raj, tribal areas were termed ‘excluded areas’, with their own institutions and power over local resources. Independent India has become worse,” he once said.

I never approached him to get a comment for a story. It was always to seek his definitive guidance in understanding a situation. The only formal interview I had with him was in 2012 when he negotiated the release of a collector abducted by Maoists in Chhattisgarh. “Kya sawal karenge? (What are you going to ask?)” he asked me. My last formal question to him: “You are often asked what has changed in Bastar since you quit the job of a collector. What has not changed?” His last formal answer to me: “The tribals’ own design of development. They still lead a life based on their natural resources. In the Gondi language there is no future tense. This is because they have plenty of resources around: land, forests and water.” We will remember this Sharmaji; sure you will not rest in peace till we realise this.