Thousands marooned in a 'dam-induced' flood in Golaghat

Almost 90,000 people and more than 7,500 hectares of land under water as NEEPCO dam releases water from the Doyang river that flows through Nagaland and Assam 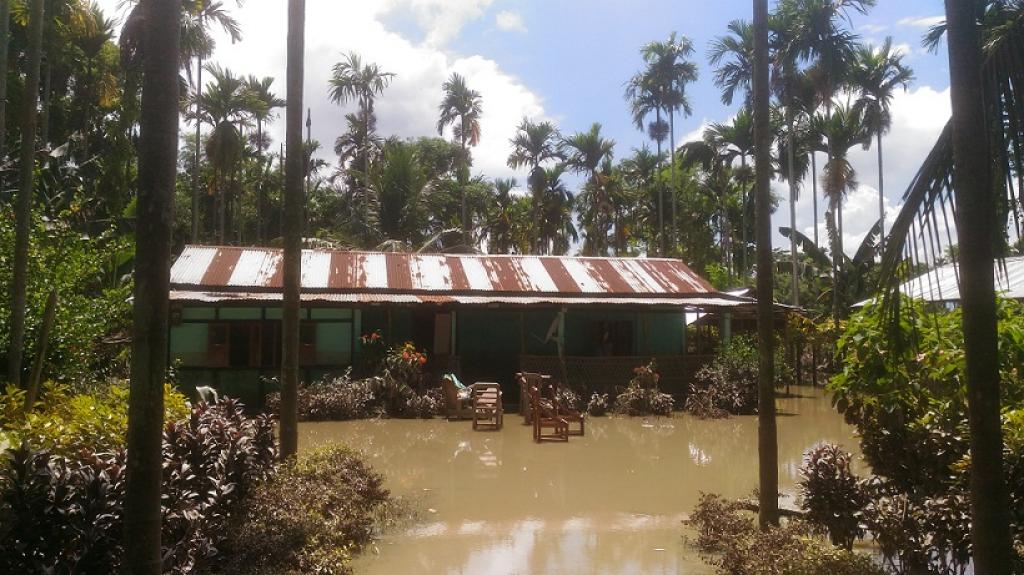 Bol Bahadur Karki woke up, all shaken on July 31. He had stepped in a deep pool of muck as soon as he set foot on the ground. It was about 5:30 in the morning. His 60-year-old father, sleeping in the other room, raised an alarm too.

“It wasn’t even raining. We hadn’t seen any floods in the last 30 years and suddenly, the water almost reached my bed,” says Karki. “I was absolutely terrified. The Doyang River is at least a kilometre away. To my shock, I saw all the betel leaf vines that my father had planted, and our brinjal crop were under water, and the nearby pond had been transformed into a river,” he adds pointing at his betel trees. Instead of betel leaf vines, the tamul tree trunks were matted with water hyacinth.

“Thankfully, there was no rain. Otherwise, rescuing everybody would have been difficult. By 11 am, we were making last ditch attempts to save our motorcycles and tractors. But the water continued gushing in,” says Biman Payeng, a resident of Herheri village. Residents of the Mising Suk hamlet came to their rescue. Banana trunks were stuck together to form small rafts in which animals and humans were ferried. Payeng says that by 4:30 pm, the State Disaster Relief Force (SDRF) was deployed with dinghies. That night, about 80 families stayed at the school’s compound. A community kitchen was set up but by late night, when the water started entering the school compound, they took shelter under a stage built for cultural programmes and located on higher ground.

Twenty kilometres downstream, near Huruka village, Shamsul Haque faced a similar situation, but only by midnight. "Even as upstream villages were washed away by the deluge that was coming towards us, the district administration made no announcements. By 2 am, we saw SDRF boats but that was not enough. Some people got boats from the sand miners near Kanhaighat and charged Rs 500 per cow. We saved our family and the animals. My tractor is under water," says Haque, who has to cross a broken embankment to get to his house.

Locals blame the 75 MW Doyang Hydroelectric Power Project, sponsored by the North Eastern Council and inaugurated in the year 2000. “This was not a flash flood. It was a misfortune brought upon us by a hydroelectric project in Nagaland. Had the district administration informed us on time, we would not have faced this disaster,” says the Gaon Burha or Sarpanch, Harekrishna Mili, of Ratanpur Gram Panchayat, of which Herheri is a constituent. When angry villagers confronted the Circle Officer, Javed Ali, he said even the senior officials were not informed about the release of water from the Doyang.

A local contractor in Ghulabiri village, who oversaw the construction of a bridge inaugurated about 19 days ago by the local Member of Legislative Assembly, Mrinal Saikia, was now trying to salvage the wood from the bridge. “Water hyacinth (meteka) gushed in from the river and flowed over an embankment on to this era xuti (an ox-bow lake) and started pushing the bridge. By midnight, it was under water,” says the contractor. By August 6, according to the Assam State Disaster Management Authority, 87,300 persons had been affected and 7,086 hectares of land in Golaghat district were under water.

Facing public anger, Saikia reportedly filed a police case against the North Eastern Electric Power Corporation Limited (NEEPCO), a public sector undertaking, which operates the Doyang Hydroelectric Power Project. In a police complaint at Golaghat Police Station, Saikia alleged that as many as 116 villages in Golaghat district were under water due to the negligence of NEEPCO. However, local farmers' organisation, Jeepal Krishak Sramik Sangha (JKSS) members who have been working with the flood-affected, allege that the district administration, including senior leaders, were well aware of the water release. NEEPCO officials told Down To Earth that following the police complaint, a team had come to investigate the case from Golaghat without any evidence, acting only on the basis of the complaint. "We have learnt from the news reports that the police team did not probe any case of negligence by the authorities. Instead, Nagaland police apprehended Assam Police officials and detained them," says advisor to JKSS, Pranab Doley. Senior officials of NEEPCO say that a meeting was convened on July 25 where both, the administrations  of Golaghat and Wokha (Nagaland) districts were informed to be prepared for the floods. 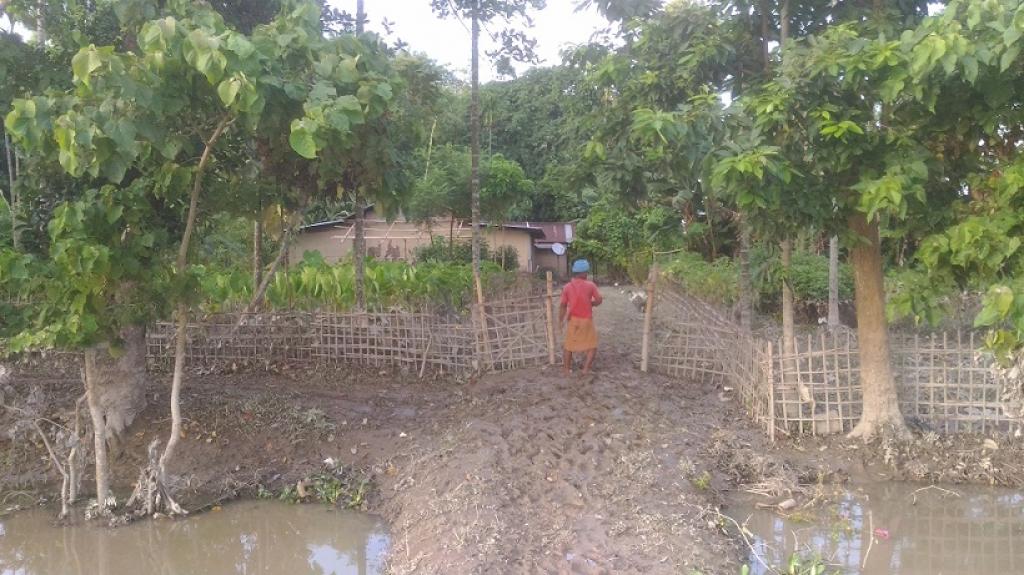 In its defence, on August 7, NEEPCO released a report in which it stated that flood levels in the Doyang River increased due to extreme rainfall in Nagaland and neighbouring Myanmar. The 2,600 square kilometre catchment area of the Doyang Hydroelectric Project, which is about 60 kilometres upstream of Golaghat town, received extremely heavy rainfall. According to the Nagaland Soil and Water Conservation Department, Wokha district, where the hydropower project is situated, received a 348 per cent rainfall excess from January to July, with most of the rain coming in towards the end of July. In its press release, NEEPCO stated the inflow to the Doyang reservoir was more than 600 cu m/sec since July 27, which increased to more than 1,150 cu m/sec or about a little more than 54 acres filling up with one feet of water in a minute on July 30. The live storage capacity of the dam is only 370 million cubic metres. NEEPCO officials say that the rain in the catchment area of the dam was much higher than the normal, despite India Meteorological Department officials stating a 30 per cent rainfall deficit in 2018.

Bharat Chandra Deka, Executive Director, Operations and Maintanence, NEEPCO, also said that a landslide dam occurred on the Sidzu River, a tributary of the Doyang, near the Chakabama Pfutstero Bridge in Nagaland’s Zunheboto district. As per NEEPCO's August 7 report, all the deputy commissioners of Nagaland’s districts were issued a letter by the Nagaland Disaster Management Authority, which informed about the landslide. Deka said that local administration in Golaghat and Wokha districts were also notified..

People living downstream of the dam have also accused NEEPCO for deliberately keeping the water level high so that there was more electricity generation. The Central Electricity Regulatory Authority had set 14.28 million units for July as target. According to the Central Electricity Authority's monthly report, the Doyang Project produced 45.52 million units, which is thrice the amount of electricity the dam was supposed to produce in July. “The Doyang HEP has been keeping away most of the information from the people especially about the dam safety protocols,” says Doley.

Before the deluge, Golaghat was experiencing drought-like conditions. According to Rupa Shresta, a farmer in Herheri, they had to hire electric pumps for irrigation. “At least 15 electric pumps in our village are now under water along with most of the crops submerged by this sudden flood,” she says. In several areas, where waters have not receded, locals have made passages for the water to drain away from their croplands. “We have no other option but to rid our lands of this excess water or else it will bring diseases. We are already experiencing an invasion of earthworms and snakes and there is an unbearable rotting stench especially near the waterlogged fields, which have turned into a breeding ground for mosquitoes,” adds Shresta. While the local administration has been giving relief food material, many residents are yet to see any action from the authorities.

Despite appeals from Assam Chief Minister Sarbananda Sonowal to NEEPCO to not release water from the reservoir, NEEPCO say that the quantum of water was huge and might have threatened the dam’s structural integrity if it was not released. “This disaster is human-made. It shows the callous attitude of the dam developers and NEEPCO towards various people in downstream areas. This act shows that from the beginning, the authorities did not pay any heed to the topography of the area—not just the hydroelectric project but also several kilometres downstream on the Numaligarh-Jorhat section of National Highway 31. Due to faulty planning of the bridges and the highway section as a whole, which is being four-laned now, bridges have been swept away. Now, the highway traffic has been diverted through smaller roads so that goods and services reach towns like Jorhat,” says Doley. 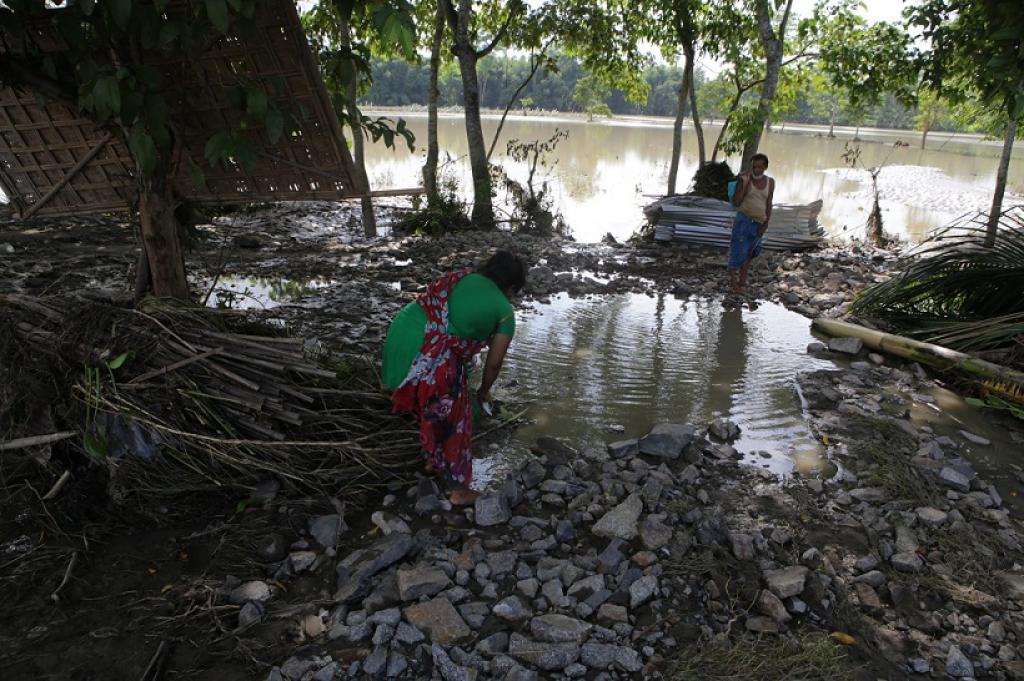 For NEEPCO, this will be the second instance when the state-owned corporation has been accused of creating human-made disasters due to flooding witnessed in the downstream areas. In the last two years, Ranganadi project in Arunachal Pradesh has displaced thousands in Dhemaji and North Lakhimpur districts of Assam. Local farmers’ organisations, environmentalists and politicians are locked in a bitter battle over the feasibility of hydroelectric projects as the region witnesses a changed monsoon pattern.

Raja Hazarika, a young Industrial Training Institute student from Huruka village said that if the dam authorities had kept the spillways open during the monsoon season or at least made an attempt to inform everyone on time, a lot would have been saved.