Two per cent of world population: that’s the number of poor in just five states of India

Bihar, Chhattisgarh, Madhya Pradesh, Rajasthan and Uttar Pradesh are perhaps holding back India and the world from achieving the Sustainable Development Goals (SDGs). India, which has 17 per cent of the global population, is home to close to 270 million poor and more than half (52 per cent) of them live in these BIMARU states. In fact, 42 per cent of India’s population lives in these states and nearly one in every 4 person is poor.

One in five Indians currently lives below the $1.25 (Rs 81) a day, and 836 million Indians still live in extreme poverty, according to the United Nations. The SDG on poverty is to ensure that no one lives on less than $1.25 a day by 2030. 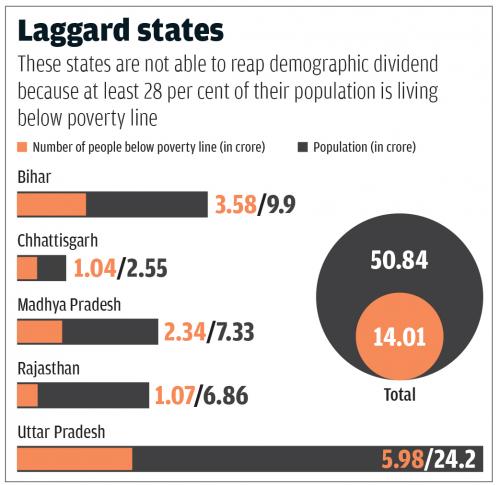 According to the Voluntary National Review report on implementation of SDGs submitted by India to the UN in 2017, India has played an important role in shaping the SDGs.

India is the world’s second most populous country and the state of poverty in these states is a reflection of poor governance which will affect the national and global progress too. The SDGs are much more ambitious than the MDGs and call for proactive policy corrections and action at regional level.