UP Assembly Elections 2022: Why stray cattle is a poll-issue this time 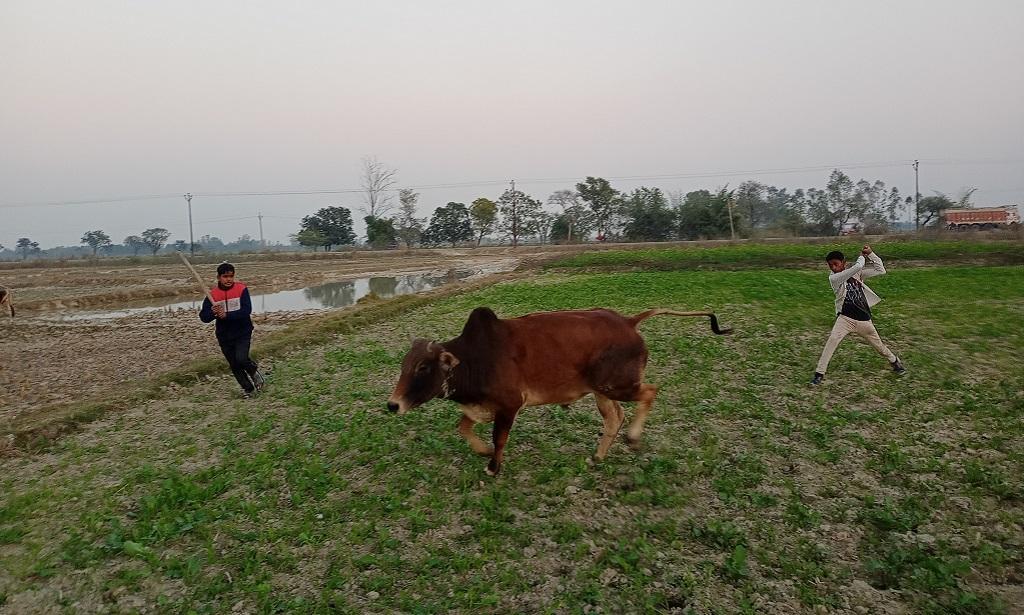 Farmers drive away stray cattle from their fields in Amethi district, UP. Photo: Gaurav Gulmohar

Farmers in poll-bound Uttar Pradesh are worried of stray cattle. So much so that it has become a poll issue.

Take Santram Kushwaha of Hamirpur district for instance. He still remembers the night when he was awakened by the mooing of cattle as he guarded his field.

He got up and went to see what it was all about. One of the animals veered around and charged at him. He bolted and ran. And fell mid-way. When he awoke, he was bed-ridden. And the precious crop that he was guarding, was destroyed.

Kushwaha is not alone. Pradeep, a resident of Bandwa village, also in Hamirpur, also guards his crop when it matures. He has even built a temporary hut in his field for this purpose.

Some 250 kilometres from Hamirpurpur, Sherbahadur Singh, a farmer from Teekarmaafi village in Amethi district also faces the same problem as Santram and Pradeep.

“I grow paddy on my 3-acre plot every year. I earn about Rs 1 lakh. But this year, stray cattle have destroyed my crop. Just three quintals of paddy has been salvaged. That will be used for my family. How will I pay for the installment of the Kisan Credit Card? I do not even have money to pay for power. I am ruined because of these animals,” he said.

The problem of stray cattle in UP began five years back in 2017. The Union Ministry of Environment, Forest and Climate Change brought in Prevention of Cruelty to Animals (Regulation of Livestock Markets) Rules on May 23, 2017.

Meanwhile, the UP government rigourously implemented the UP Prevention of Cow Slaughter Act, 1955. These two regulations caused a shutdown of all abattoirs in the state. But it also impacted the trade in livestock, especially cattle, throughout the state.

It worsened the situation to such an extent that all livestock owners abandoned their animals. These animals began to be brought to the Nepal border clandestinely for trade.

This affected the rural economy. The livestock economy is a prime example of the circular economy among the poor.

Cattle are usually considered ‘productive’ in India till the time they can give milk. Which is between the ages of 3-10 years. But the average life expectancy for cattle is 15-18 years.

Once a cow stops producing milk, it is traded and is exchanged between at least four other owners. This brings money to the original owner who then buys a new animals, bring fresh blood into the cattle population. Livestock owners thus know how to create a balance between productive and unproductive animals.

The government having stopped all livestock trade meant that owners were unable to get enough money. On the other hand, the animals that had been abandoned, caused road accidents and destroyed crops.

There are no solid estimates about how much damage stray cattle have caused to crops in UP. That is because only a patwari (revenue official) can estimate the damage after a tour of the property. Or a farmer can apply under the Pradhan Mantri Fasal Bima Yojana (PMFBY).

But the damage caused by stray cattle is not compensated and neither is there an allocation for it under the PMFBY.

“Five years back, we farmers used to grow peas on five bighas. There used to be a big market in the village where traders used to come from across the district. But that market is not held now since farmers have stopped farming. Barely 2-3 farmers have planted a crop of arhar pulses this time,” Ram Lal Verma of Bhagatpur village in Amethi district said.

He added that while big farmers corral their fields with barbed wire, small farmers cannot do so.

That is because even if they do so after spending Rs 10-12,000, the barbed wire can still break down if the number of stray cattle is more. This increases costs for them even more.