Rs 30 being given for the daily upkeep of cows in cattle shelter simply not enough, say voices on the ground 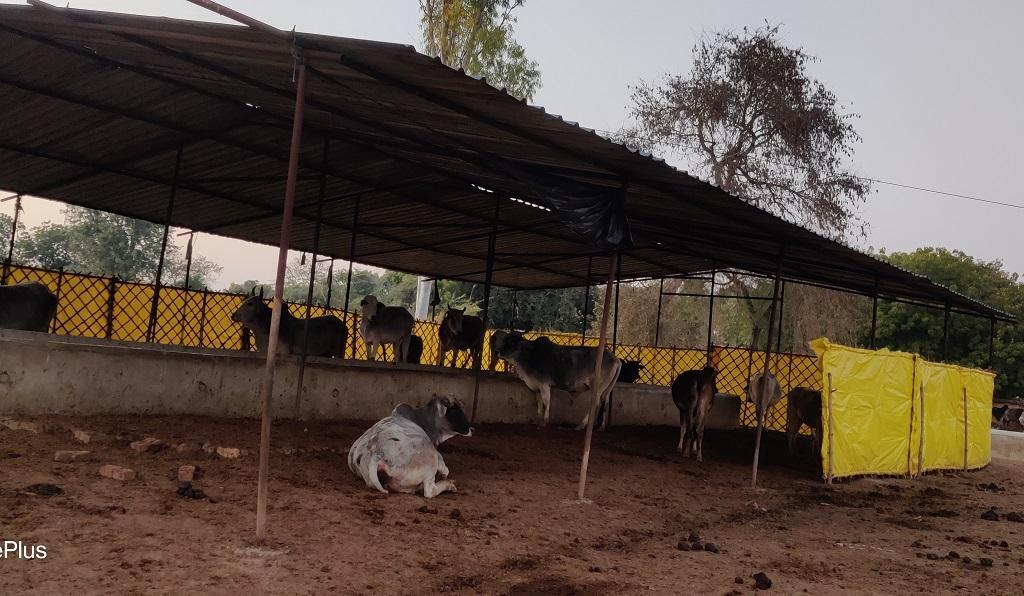 'Gaushalas' have been constructed in UP for stray cattle. But they have a lot of shortcomings. Photo: Aman Gupta

The Uttar Pradesh government took several steps in 2017 after its measures against abattoirs left several cattle on the streets. It got cattle protection centres as well as traditional shelters called ‘gaushalas’ constructed.

A provision of Rs 17.52 crore was made as grant-in-aid in 2018-19 for the maintenance of stray bovines. The state’s budget documents show that this amount was spent.

An amount of Rs 203.11 crore was spent on the maintenance of stray cattle in 2019-20, even as the provision in the budget was only Rs 72 crore. Which is why a provision of Rs 200 crore was made in next year’s budget.

In addition, Rs 19.20 crore has been spent on the establishment of the Bundelkhand Bovine Van Vihar.

This means that the state government has spent about Rs 355 crore in the last three years on fixing the stray cattle problem, according to data available so far.

However, the problem does not seem solved. Raj Bahadur, the chief of Pathkhuri village, said there were stray cattle in every village. No panchayat had enough resources to put all animals together in one place.

“The government gives Rs 30 per day for a cow, which includes its fodder, a tin shed for it to live in and drinking water. It is very difficult to manage all this in such a small amount,” Bahadur said.

He added people from other villages left their cows in his village for the night. “If we don’t keep them, they will graze our crops. If we want to keep them closed in one place, the resources are low. To add to that, funds do not come through for months. We are stuck in every way.”

Cattle have been continuously dying in the gaushala of Umaria village of Gohand block in Hamirpur district. Down to Earth spoke to the administrator Jaipal Singh.

“There are two reasons for this. One is that we do not have dry fodder to feed the cows. The other is the extreme cold. The entire shed is an open space. How can hungry cows survive in such cold?” he said. Singh added: “When we talked to the village chief about it, he said there were no funds.”

The administrator has not been paid his salary for four months. The fodder in the cowshed has been donated out of generosity by the villagers. There are no funds to meet the other expenses.

“There are two temporary and one regular gaushalas in our village. But none has enough fodder to feed the animals,” Pradeep, a resident of Dhamna village, said.

The village chief did not have necessary funds to buy fodder. The funds he got were used to buy the tin shed and the goods needed to protect the cows from the cold.

The government claims that a helpline has been issued to catch stray cattle, but farmer Sher bahadur Singh, a resident of Tikkarmafi village in Amethi, said, “We complained several times to the Chief Minister’s Helpline 1076. We received a message in the evening stating that the problem had been resolved. But it had not.”

Bipin Pathak, a farmer and resident of Bhaganpur in Amethi, has also been calling the medical officer for several days but no vehicle has come to catch the stray animals.

When DTE called up Sharda Devi, the chief of Bhaganpur, her son picked up the phone and said, “A few days ago, we sent 60-65 animals from the village to the gaushala in Amethi. But the number of stray animals is very high and the municipality has only one car. So the vehicle is usually not available.”

He added: “The number of animals in the remaining, adjacent gaushalas is full and there are still 100-150 strays roaming the village. People in the village are very upset. I am upset too.”

How much budget is required?

The government is promising Rs 30 per cow per day to cattle herders. But Prince Jain, the operator of the Shri Kamadhenu Gaushala, set up by Mahant Shriramdas of Vrindavan, with the objective of preventing cow smuggling said that amount (Rs 30 per day) was being given in government-run gaushalas in the state.

“One quintal of straw costs Rs 1,100, a 50 kg sack of bran costs Rs 900 and green fodder costs Rs 10 a kilo. The expenses of labour, water and living space are separately charged. Feeding a cow daily costs more than Rs 200, which is not possible in Rs 30-33,” Jain said.

If Rs 200 is accounted for, the government will have to make a provision of about Rs 8,760 crore in its annual budget for the maintenance of about 1.2 million animals in the state.