To swindle money from the Narmada dam rehabilitation scheme, lands of thousands of tribal families have been given to the dam-displaced people without their knowledge

Both Tejli Bai (left) and Dhuli Bai (below) have been tricked into giving up ownership rights over their land. While 60-year-old Tejli Bai says she still does not know how the government land records were changed, Dhuli Bai says that a crook tricked her into giving her thumb impression on a land ownership paper with the promise to get her husband out of jail (Photographs: Srikant Chaudhary)

In the bucolic uplands of Dhar district in Madhya Pradesh, a new chapter in the controversial Sardar Sarovar Dam is unfolding. And this one is beyond imagination. Before the displaced people of the dam could be rehabilitated, in recent months anti-dam protesters have detected a new group of displaced people. But they have been displaced not by the backwater of the reservoir but by a well-concealed and long-run scandal. To swindle money from a rehabilitation scheme, lands of thousands of tribal families in Dhar have been given to original dam-displaced people, even without their knowledge. Now as the families in this drought-affected district discover themselves as landless, they are being termed as the new “refugees” of the Sardar Sarovar dam on the Narmada river.

Tejli Bai is one such victim. The 60-year-old widow is a resident of Dhar’s Kudikipura village, which is more than 50 km away from the dam site. “In 2009, my husband had applied for a bank loan and the officials rejected our application saying that the 0.8-hectare land we were planning to give as security was owned by some person named Ramasya,” says Tejli Bai, adding that it was the first time she got to know that the ancestral land she had been living on for decades no longer belonged to them. Her husband died in 2012.

In April this year, Bhopal saw widespread protests for the rights of people like Tejli Bai by the Naramada Bachao Andolan (NBA), an association that has been at the forefront of the anti-Sardar Sarovar dam movement. “These families are victims of a scam that has been going on since the government announced the rehabilitation project for the people displaced by the Sardar Sarovar dam,” says Shradha Kashyap, an activist from Dhar.

She explains that the genesis of the scam can be found in the special rehabilitation package the Madhya Pradesh government rolled out in 2005 for the families that were displaced because of the project. The 2005 package, which came after repeated directives of the Supreme Court, promises Rs 558,000 to each displaced family in two installments to buy land. While the first installment is to be paid after the identification of land, the second one is paid after the registration of the sale deed.

The provision for disbursing the second installment is behind the current crisis. Crooks acted as middlemen and approached the displaced families to help get the money. They then tricked families—generally illiterate and poor—living in villages that are unaffected by the project to change the land ownership papers (see ‘Out of order’).

Some families even allege that they were tricked directly by government officials. “In 2009, the patwari (revenue officer) visited my house when I was alone and told me that the government had started a scheme to help people repair their houses,” says Dhuli Bai of Birlai village. She alleges that he then got her thumb impression on a piece of legal document that she later found out was for transfer of land ownership. 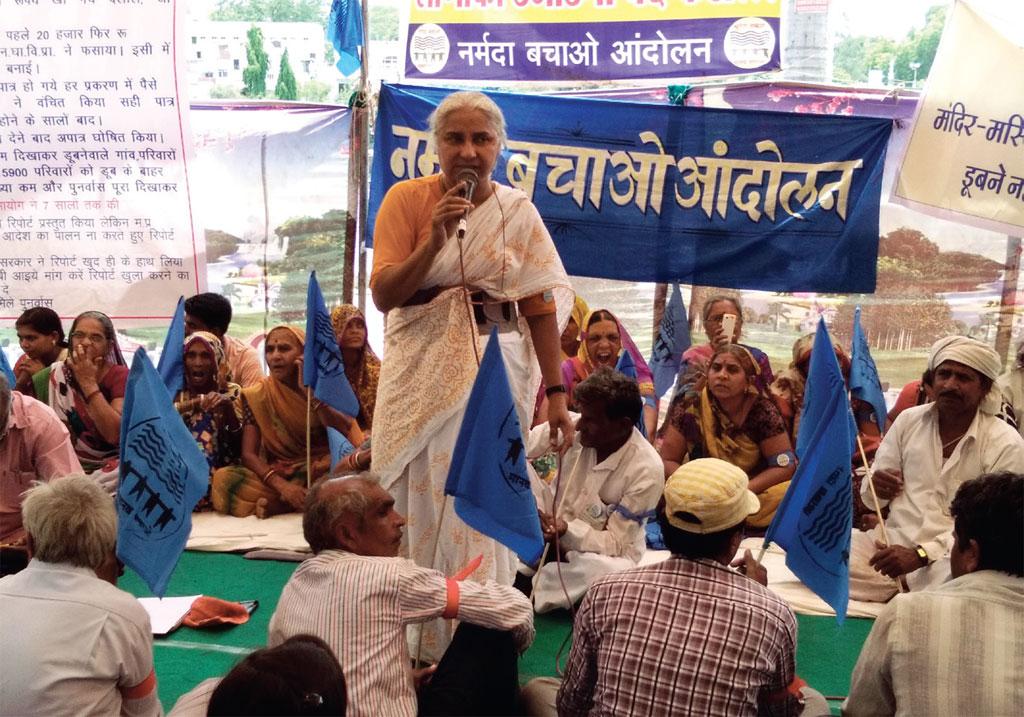 Though there are no official figures, the number families affected by the scam might well be over 2,000, say activists. A survey done by NBA in 2006 found that at least 900 farmers had been duped. The survey found that the victims were mainly from villages in Dhar and Barwani districts. As per the Narmada Control Authority (NCA), 37,757 families have been affected in Madhya Pradesh, of which 4,363 have opted for the rehabilitation package. Of this, 2,905 victims have “purchased” land, while 1,457 have taken the first installment. Even the S S Jha Committee, which was appointed by the Jabalpur High Court in 2008 to look into corruption in the compensation mechanism of the scheme, said in its progress report on July 14, 2015, that a “large number of the sale deeds appear to be fake”.

Activists say that targeting families from areas away from the dam meant nobody would take the scam seriously. One such example is of Hingalibai, a resident of Kudikpura village in Dhar district, who was tricked to give up her 1.2 ha land. She says in 2006 her husband was arrested by the police for a scuffle with a neighbour. She says a person named Narayan Bheel approached her and said he could help get a bail for her husband. He then asked her to give her thumb impression on bail papers. “Later, I got to know the papers were for transfer of my land rights.”

While the families displaced because of the dam have rightfully received substantial attention, families such as Tejli Bai’s are still struggling to get recognition. This, despite the fact that such cases have time and again brought to the notice of the state government, which has only tried to downplay the situation.

The report, say activists, is essential to understanding the magnitude of the corruption. They hope it will prompt the government to act.