This year no fewer than 16 elections will take place in Africa, many of which involve removing presidential term limits. The motives are worth examining 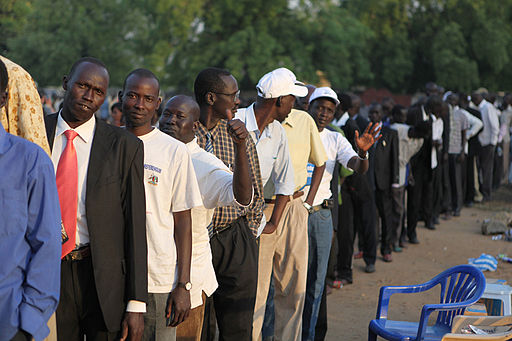 The African continent’s adherence to democracy as it’s understood and applied by the West has been a long and difficult process. In a June 1990 speech, French president François Mitterrand called on African countries to move more quickly toward democracy. Even he recognised that it took two centuries for Europe to do so, while also struggling through setbacks such as Nazism and Stalinism.

It’s no wonder that the desire of certain African heads of state to remain indefinitely in power is raising questions - not only about their objectives but also the appropriateness of the means being used.

US president Barack Obama has been outspoken on the subject, castigating elected leaders who have pushed aside term limits. At the 2014 US-Africa Business Forum, he championed the peaceful transfer of power. In doing so he won the support of opposition parties in a number of countries.

It’s less certain that the leaders themselves paid much attention: Sixteen presidential elections take place in Africa this year, many under constitutions that dispense with term limits. Are these “tampered” constitutions, to use the term commonly employed? Whatever the case, huge protests broke out in Burundi and Congo, and in Burkina Faso a massive uprising against the proposed third term for president Blaise Compaoré pushed him from power in October 2014.

Neither popular resistance nor the repeated injunctions of US Secretary of State John Kerry have convinced the continent’s various autocrats and dictators to abandon their desire to cling to power. Indeed, more voices are being raised against presidential term limits, and it’s worth examining the arguments put forth.

The 'good' reasons to stay in power

Some of these arguments are so basic as to be almost naive. In the Côte d’Ivoire daily Inter on January 6, former Minister Cissé Bacongo called for the removal of term limits in the next Constitution - a position contrary to that of his political party, to which President Alassane Ouattara also belongs.

Without charismatic, competent, credible and honest officials who can assume power, the people could find themselves compelled to elect a president by default, even as the current president will be excluded from the race.

Bacongo went on to say that being consistent with the West in such matters would be premature because “in large democracies, the political class is full of competent managers”. The country’s young political activists certainly appreciated his point of view.

But there are also arguments more likely to receive popular support. In the weekly Jeune Afrique dated January 10, François Soudan lays out a fairly widespread view, but one rarely expressed so openly by the continent’s autocrats or those close to them:

Democracy and development don’t move forward at the same speed…. Establishing [democracy] is impossible without its being embraced by the public, which has certain prerequisites: education, health, access to water and electricity, but also order and stability, even if that requires constraining civil liberties. [Thus in Rwanda], the media are controlled, as are political parties, associations and NGOs.

This is apparently the price of the flattering economic record of Rwandan president Paul Kagame.

In his 1990 speech Mitterrand said:

Soudan’s assertion confirms the first part and contradicts the second. In fact, let’s admit it: “Democracy is not profitable”, as journalist and writer Jean-Claude Guillebaud asserted in 2011. He was referring to Tunisia’s financial downgrade after the fall of longtime ruler Ben Ali.

Respect the people’s will?

If we’re to believe that development is best achieved through political stability, even to the point of allowing autocrats and dictators to remain in power indefinitely, why bother adding a veneer of democracy at the risk of triggering violence at home or running afoul of the international community?

And it is precisely here that there’s a misunderstanding about the essence of democracy. Those who cling to power do so for the wrong reasons, but they often use legal means to get there - parliaments, which could well be in their pockets, or referendums, the most direct form of democracy.

In Rwanda, Kagame and his party launched a nationwide petition that gathered signatures from more than 60 per cent of the country’s registered voters. That led to a referendum that received 98.9 per cent “Yes” votes, and allows Kagame to potentially remain in power until 2034—18 more years.

Yet opposition forces, who swear by the rules of democracy, are generally hostile to referendums. When Compaoré suggested using one to allow him to run for a third term, there was an outcry that he’d inevitably win because rural areas were in favour of the idea.

Here lies one of the stumbling blocks of democracy in Africa: on one side there are townspeople—politically aware and active—and on the other those who live in the country—more attached to the stability and security offered by an established leader. This is often clear on electoral maps, as demonstrated by the recent results in Burkina Faso and the Central African Republic. And remember that more than 50 per cent of Africa’s population still lives in rural areas.

If third presidential terms in Africa signal a shift toward dictatorship, they’ve usually been given some degree of democratic legitimacy—and it’s hard to tell if it’s the result of electoral fakery, popular support, or the deep conviction that there can be no real development without political stability.

So we have to ask ourselves: Has the West been reckless and hasty in trying to transfer “universal” political models to Africa? Or is more time required for a genuine democratic spirit to be present, rather than just mere words?