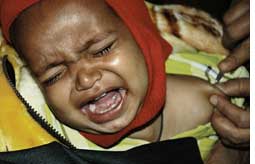 indias Universal Immunisation Programme may suffer yet another blow. The centre has asked all state governments to stop use of measles vaccine manufactured by Indian Immunological Limited, until further orders, after four infants died following inoculation with the drug.

The children died in the last week of April soon after they were administered the measles vaccine in Tamil Nadus Thiruvallur district. Soon after the incident, the Union minister for health and family welfare, Anbumani Ramadoss, set up a high-level committee to probe the deaths.

Preliminary investigations linked the deaths to human error. As a precautionary measure, the Tamil Nadu government has ordered that vaccination be carried out only at primary health centres under trained supervision.

Indian Immunological Limited (iil), a subsidiary of the National Development Board, had supplied the measles vaccine for the national immunization programme for the first time.

Experts feel closure of these public sector units could put pressure on the national immunization programme, which gets most of the vaccines from these units. Since importing vaccines will increase the cost of the programme, in the long run, this could affect Indias self sufficiency in immunisation, says S K Mittal, head of the department of paediatrics, Max Hospital, Delhi.

Measles, a vaccine-preventable disease, continues to be a leading cause of deaths in children in India. According to National Family Health Survey, 2005-2006, less than 60 per cent of the children are vaccinated for this viral disease.