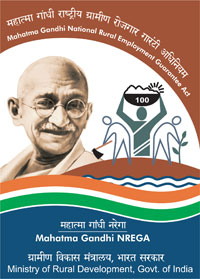 Gram sewaks in Maharashtra have refused to give in to the high-handedness of the administration for the implementation of National Rural Employment Guarantee Scheme (NREGS) so that it can be projected as a success. Instead, they have decided to approach the high court to press for their demands like formation of a separate independent agency for the implementation of the scheme.

On February 27, some 20,000 gram sewaks from across the state held protest meetings before collectorate offices in all the districts to drive home their grievances.

The sewaks are not averse to NREGS work, but it should be in the spirit of the Act itself, says Ramrao Borse Patil, secretary of Maharashtra Rajya Gramsewak Sanghatana, a union of gram sewaks. “Under the Act, those who demand work should be provided the same. But we are under pressure from the administration to recruit at least 50 workers in each village and get two jobs done in a season,” he adds.  This, says Borse Patil, is very impractical, as the demand for work under NREGS is not uniform. “A good number of panchayats in the state are adjacent to towns or actually in towns. In these areas there is virtually no demand for work because workers are already getting three to four times the NREGS wage,” he notes. Officials however, insist that NREGS work should be done in such villages, too, putting undue pressure on gram sewaks, Borse Patil adds.

On the flip-side, in tribal and poor areas, where there is genuine demand for work, villages and hamlets under one panchayat are located at great distances from each other, says Borse Patil. Here gram sewaks are under a different kind of pressure. “In Nandurbar, where I work villages coming under gram panchayats are located 20-25 km away from the main village where the gram panchayat office is. The terrain is difficult and often there are no means of transport,” he says. In such area, to expect the gram sewak to handle the entire NREGS work single-handedly is asking too much, but that is exactly what is happening, he adds.

Sanghatana president Lahanu Gangadhar Gaikwad says that under the Act, 50 per cent of the responsibility for implementing NREGS rests with the administration, but the latter does nothing except putting pressure on gram sewaks. “Take the case of preparing social forestry nurseries under NREGS. The Forest Development Corporation of Maharashtra (FDCM) has an independent system and trained staff for nurseries, but when the work is to be done under NREGS, FDCM gives no technical assistance to the gram sewak–he is handed over the seeds and other material. How does the gram sewak know which seeds require what kind of temperature or gestation periods to sprout?” he questions.  Similarly, when orchard plantation work is undertaken under NREGS, the agriculture department simply hands over saplings to the gram sewaks, says Gaikwad. “And when these projects fail, gram sewaks are at the receiving end.”

Sanghatana members have often complained that gram sewaks are already overburdened as they have to handle all responsibilities pertaining to village administration single-handedly. These include conducting 24 gram sabha meetings in a year, implementing 120 central and state government schemes on a variety of subjects, collecting tax, attending zilla parishad and panchayat samiti meeting, and handling the entire day-to-day business of the panchayat. Having to handle NREGS on top of this is just impossible, they insist. “On the face of it, government has provided the gram rozgar sewak to help the gram sewak with NREGS work, but this post comes with no salary or remuneration,” says Borse Patil. “Only a paltry 2.5 per cent commission on whatever work is undertaken is given. So, there are no rozgar sewaks.”

Despite this huge burden, in case of any mistake, gram sewaks are victimised through swift suspension or registration of criminal offences. Sanghatana’s Amravati district president Kamlakar Vanve narrates two cases. In the year 2009, gram sewak K C Gondekar of Morshi had to spend 15 days in Nagpur Central Jail because of an error in the amount withdrawn from the bank for NREGS. In 2010-11, Ashok Kumbhaklar, who looks after the villages of Naya Wathoda, Lihdat and Akhatwada in Amravati district, was suspended for mistakes made by the gram rozgar sewak while he was on sick leave. Threat of criminal proceedings still looms over him, says Vanve.

“No wonder nine gram sewaks have committed suicide in the state in the past one year from sheer work stress,” says Borse Patil. Sanghatana has also written a letter to the minister in charge of employment guarantee, Nitin Raut, on January 4, 2012, but has not received any response.


“Our demands are clear,” says Gaikwad, “We want the government to implement the NREGS through an independent agency, or at least provide a salaried and accountable gram rozgar sewak to help the gram sewak in implementation. In the larger picture, we also want government to review the work load of the gram sewak, assess whether it is proportionate to human capacity and make necessary changes.”