Over-grazing is leading to the degradation of pasture lands 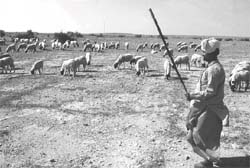 agriculture, including livestock rearing, is of prime importance to India. More than 70 per cent of the country's population subsists solely on agriculture. Therefore, natural grazing lands and cultivated fodder crops are of prime importance and development of forage production systems is vital for livestock maintenance and sustenance. However, the grazing requirements of the livestock far exceeds the availability of land or fodder. This results in over-grazing and consequent degradation of the pasture lands.

Over-grazing has not only decreased the productivity of pasture lands, but has also led to loss of soil fertility and water holding capacity. Increasing population and land use practices have also contributed to degradation of pasture lands. These lands are used to meet other requirements as well -- mining and urban development, for instance.

In just two per cent of the world's geographical area, India accounts for 15 per cent of the world's livestock population. Expectedly, the pressure on the available land is beginning to show. Though the capacity of pasture lands is for grazing only a 31 million livestock populace, on a average, around 100 million graze in the same area. The pressure has grown steadily -- over two per cent per annum -- for the last two decades.

India does not have natural pasture land due to climatic conditions. Grazing lands in the country have come up only due to removal of vegetation. To add to the problem, the scope of increasing area under cultivated forage is rather limited because of the preference given to production of "human food". Free grazing of land also causes untold damages to the natural regeneration of the land.

Keeping the importance of livestock in the lives of many people, it is, therefore, important to rejuvenate the grazing areas especially permanent pastures and forest grazing lands. It should be done in a scientific manner after a thorough region-specific survey on the suitability of a particular vegetation type, among other things. G razers should also be forced to make optimal use of the renewable natural resources.