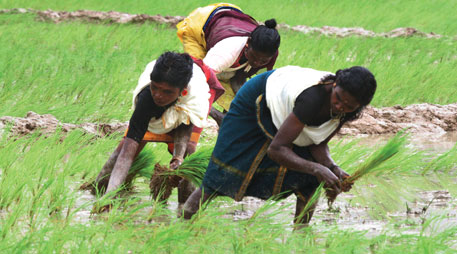 IT HAS often been suggested that Green Revolution took a heavy toll on human health and environment. But studies have never explored the potential damage caused because of high fertiliser and pesticide use accompanied by a shift from traditional multi-crop to mono-crop cultivation, predominantly rice, replacing coarse cereals and pulses. A study by researchers from Canada and India has plugged this hole. It found use of modern technology, high-yielding seeds and intensive irrigation along with the shift unleashed many problems. The study has been published in May issue of Environmental Research.

For the analysis, the researchers chose six villages in Gangavati, a taluka in Koppal district of southern Karnataka. They divided the region into three on the basis of agricultural practices prevalent: head end—part which is irrigated and rice growing; ancient—part still practising traditional agricultural methods; and dryland—a rain-fed area growing rice, coarse cereals and pulses. The researchers asked villagers questions about their nutritional status, health, water availability and sanitation facilities. They also collected 20 water samples for checking fluoride levels and 15 rice samples to study pesticide levels.

The results showed that in the head end of the taluka, ecological changes accompanying rice cultivation, like decrease in frog population and algal bloom in water because of heavy use of pesticides increased mosquito breeding. This resulted in a surge in Japanese Encephalitis (JE) and malaria cases. The health records at the Gangavati primary health centre showed that incidence of JE was confined to areas near irrigated rice fields due to high presence of Culex mosquito. According to Atanu Sarkar, the lead researcher, standing water in rice fields promotes breeding of crustaceans and insects that attract birds which are reservoirs for the JE virus.

Moreover, the traditional coarse cereals diet has been replaced by mill-polished rice which lacks in fibre and is high on starch. This has given rise to diseases like obesity and diabetes more in the head end area of the taluka. The dryland varieties of coarse grains and pulses were less vulnerable to pest problems. High pesticide application led to itching and irritation of skin in 78 per cent population, weakness and giddiness in 36 per cent, breathing problems in 23 per cent of the people in head end and ancient areas. The rice samples also had measurable levels of endosulfan.

Average fluoride levels in groundwater samples of the ancient, dryland and head end areas were 2.15, 2.07 and 2.18 mg/l respectively. The permissible limit for fluoride as per Bureau of Indian Standards is 1.5 mg/l. The researchers say the study is a wake-up call for the policy makers who support modern agriculture practices without analysing its impact.