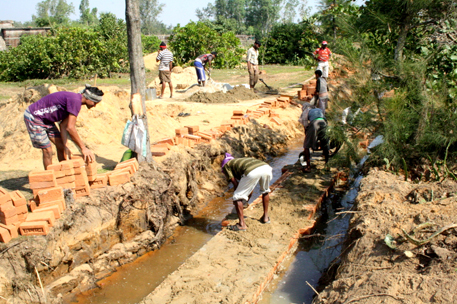 The National Green Tribunal (NGT) has temporarily restrained South Korean steel giant, Pohang Iron and Steel Company (POSCO), from felling trees or diverting forestland for non-forest activities at the site of the company’s proposed integrated steel plant project in Odisha. The tribunal has left it to the state government to decide on the matter.

The primary contention before NGT regarding the forest clearance for POSCO has been whether the state government is required to give an order under the Forest Conservation Act (FCA), 1980, following the approval by the Union Ministry of Environment and Forests (MoEF) in 2009. The matter has been pending before the tribunal for the past eight months. The state government had so far been claiming that it need not pass any order for such activities.

What FCA says about state’s role

As per the provisions of FCA, forest clearance for development projects involves a two-stage approval. In the stage I, upon review of the proposal, MoEF gives an in-principle clearance by stipulating conditions, such as compensatory afforestation and expenses for mitigation of probable environmental damage. Following this, the state government submits a report stating compliance of the stipulated conditions by the project proponent. MoEF gives its stage II or final approval based on this report.
On Friday, while deliberating on the provisions of FCA, the tribunal bench, chaired by justice Swatanter Kumar, noted that the approval by the Centre is neither an order nor a decision as contemplated under Section 2 of FCA. The section states that de-reservation of forests or diversion of forestland for non-forest uses can be ordered by the state government or any other authority, as appointed by the state, only after prior approval of the Centre.

Environmental advocate Ritwik Dutta considers that the order satisfies the prayer of the appeal that no tree felling activity can now take place unless an order is issued by the state government.

The NGT order extends to all states. It states that “every state government is obliged and essentially must pass an order under Section 2 of the Act of 1980 and which must be a proper administrative order in terms of requirements of the provisions of the Act”.

The state governments, however, hold a slightly different understanding of their roles regarding issuance of the order as per provisions of the FCA. As clarified by D Sudhakar, additional principal chief conservator of forests of Andhra Pradesh, once a final (stage II) forest clearance is granted by MoEF, an order is given for commencement of the project by the state government. Only when conditions given in the stage II clearance is considered not adequate, additional conditions are stipulated by the state department as required on a case to case basis.

Officials of Madhya Pradesh forest department also hold the same view. Anil Oberoi, the state’s principal chief conservator of forests, clarified that the state department is involved in assessing the proposal for forest land diversion at various stages of the clearance process as documents are routed through the state department before it reaches the Centre. Therefore once a final approval comes from the MoEF, primarily the conditions stipulated in the clearance are reviewed and an order is passed accordingly.

Therefore the question now remains if the order of NGT necessitates some additional action on part of the state governments, which were already been followed by them in the course of granting forest clearance for a proposed activity.

The affected community remains apprehensive about how the NGT order will roll out. The issue of violation of people’s rights has been a central concern in the POSCO project. Earlier in 2010, an expert committee set up by MoEF, the Meena Gupta Committee, noted lapses in the implementation of the provisions of the Forests Rights Act (FRA) and breach of people’s rights.

Activists have said that say the present order of NGT will not meet the ends of justice. Prafulla Samantara, president of the state unit of Lok Shakti Abhiyan and the principal petitioner in the case, says the state government will now issue an order regarding forestland use for the project without undertaking a democratic review process. “Earlier, expert committee reports had said that the state government violated the FRA. Therefore, it would be inappropriate on the part of the state government to allow the district administration to fell trees without settling the rights of the affected people properly,” said Samantara.

The US $12 billion steel plant project of POSCO is the country’s biggest FDI project. Earlier on January 8, MoEF had revalidated the environment clearance for the integrated steel project, as it had expired in July 2012.

Order of the National Green Tribunal on the issue of cutting of trees in the forest area by POSCO, 24/01/2014