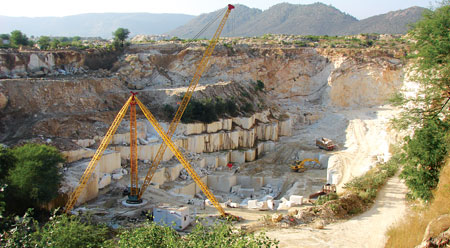 The National Green Tribunal’s Central Zone Bench in Bhopal has banned all mining activities in 84 stone and marble quarries located inside and within one kilometre radius of the Sariska Tiger Reserve and adjoining Jamua Ramgarh Sanctuary in Rajasthan.
The order passed this week followed written submissions by the assistant conservator of forests of Tehla that about 61 quarries were operating inside the Sariska reserve and that 23 quarries were operating in the buffer zone of the reserve and the adjoining Jamua Ramgarh Sanctuary.

The Bench directed the Rajasthan government to take steps to ensure that “no mining activity is carried out in 61 plus 23 mining leases and the same shall remain discontinued till further order”. The two-member Bench of Justice Dalip Singh and expert P S Rao also allowed the mining department to carry out a survey to verify the location of the quarries.

In 2005, a task force was appointed by the state government to check illegal quarrying. Before that environmental activist Rajendra Singh of Tarun Bharat Sangh, an NGO based in Alwar district, had filed a public interest petition in the Supreme Court in 1991. The apex court then directed the state government to stop issuing mining licences. However, when stone quarry owners approached the Supreme Court again, the court ruled that mining can take place one kilometre from the park.

When fresh licences were granted in the reserve in 2010,  Ram Swaroop Yadav, an environmental activist, petitioned the National Green Tribunal. The forest department which  undertook a survey on the direction of the green tribunal, found illegal mines operating inside the park. In all, there are about nine tigers living inside the tiger reserve.