MoEF asked to ascertain if project violates Forest Rights Act. State may now need people's consent to go ahead with the project 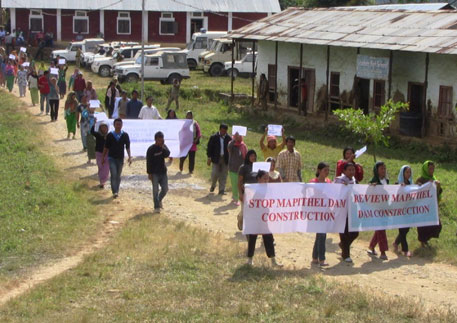 Manipur's big-ticket project, the under-construction Mapithel dam on the Thoubal river, has run into trouble with the National Green Tribunal (NGT) halting the project because it does not have the necessary forest clearance from the Union Ministry of Environment and Forests (MoEF). Communities affected by the project are also resisting it as happened in the case of Vedanta's proposed mining project in the Niyamgiri hills in Odisha, which was eventually halted by the Supreme Court, saying tribal people's consent is required for it. The compensation and rehabilitation for the residents of the villages who would be displaced by Mapithel dam has already been decided and revised once, but people are opposing the agreement. The people affected by the project belong to the Pangksul Naga and Kuki tribes.

NGT stopped construction of the project on November 20. To obtain forest clearance, the state government will now need to prove that it will not affect the rights of the tribal people and forest dwellers.

The project was approved by the Planning Commission in 1980. Construction of the dam began in 1989, but without obtaining the required forest clearance. The Forest (Conservation) Act of 1980 mandates such clearance for development projects that use forestland for non-forest purposes. In 2003, the project's cost was estimated at Rs 390 crore.

The project is located in Mapithel valley spread across Urkhul and Senapati districts and 80 to 90 per cent of the work has been completed. Once commissioned, it will submerge 1,215 hectares (ha) of land, 595 ha of which is under forest cover. The project has annual irrigation potential of 33,400 ha, with a cultivable command area of 21,862 ha. It will increase drinking water supply to Imphal city and surrounding areas by 45.46 million litres a day and generate 7.5 MW hydel power for rural electrification, according to the CAG report of 2003-04. 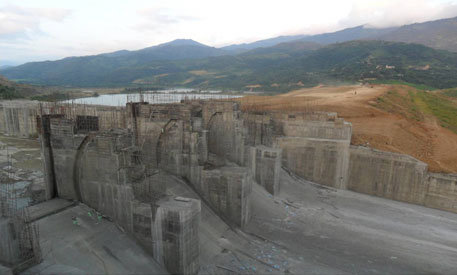 MoEF issued a letter to the chief secretary of Manipur in 2006, enquiring about forest clearance to the project. It was only in 2010 that the first stage clearance for the project was granted by the MoEF. The second stage clearance is still pending.

The project-affected people filed an application before NGT, complaining the project did not have forest clearance and seeking a halt to the project. The applicants also sought action against the state's irrigation and flood control department and the state government. The tribunal has stayed the project till further notice.

The dam has violated the Forest Rights Act of 2006, say activists working for the project-affected people. Jiten Yumnam, co-convenor of Committee on the Protection of Natural Resources in Manipur, said, “the project is a clear violation of communities' rights over their ancestral land and forest and also violates the Forest (Conservation) Act and Forest Rights Act.”

According to an MoEF order of August 2009, settling rights of the community over forestland under the Forest Rights Act and providing compensation which is accepted in the Gram Sabha is necessary to obtain forest clearance for any project. Petitioners' counsel Ritwick Dutta submitted to the tribunal that settling rights under FRA is distinct from merely rehabiliting the tribal people. “The rights under FRA also relate to community forest resources and not just the land on which tribals are living. Under the Act, certain procedures are to be followed before granting permission for the use of forestland for non forest purposes.  Until and unless MoEF grants approval by following such procedures, the government of Manipur cannot be permitted to proceed with the second stage of the project,” he said.

MoEF has now sought the comments of the Manipur government on final forest clearance for the project in light of the Forest Rights Act. NGT has ordered the Union Ministry of Tribal Affairs to submit its comments within a week and the MoEF to thereafter pass appropriate orders regarding the clearance in a period of six weeks.

It may be recalled that the Supreme Court had asked MoEF in April this year to decide on the final forest clearance for Vedanta's mining project in Niyamgiri hills in Odisha after consulting Gram Sabhas of the affected villages to see if the project was affecting the rights of the Dongria Kondh tribe. The 12 Gram Sabhas in Niyamgiri had, one by one, rejected the project. MoEF's decision on the project is now awaited.