Green tribunal notice on widening of highway passing by Kaziranga 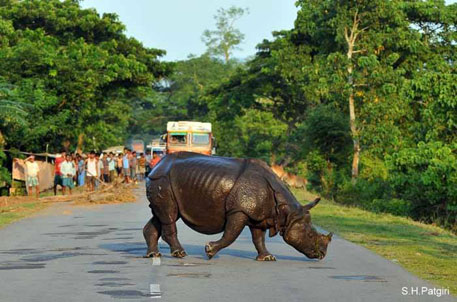 The National Green Tribunal has issued notices to the Central government and the Assam government on a plea seeking stay on the widening of a stretch of the National Highway (NH)-37 that passes by the Kaziranga National Park.

The plea filed by wildlife activist Rohit Choudhury says that the expansion of the road will lead to road accidents and death of wild animals. It also alleged that transportation on the road was continuing in violation of conditions stipulated in the environment clearance (EC) granted to Numaligarh refinery.

The condition stipulated that the work on the diversion of the highway should start before construction of the refinery begins and that it should get completed before the commissioning of the refinery project. The petition alleges that while the refinery started functioning the state and the Central governments did not take any step to divert the road.

The tribunal will hear the responses of the government authorities on September 5.

NH–37 runs from Panchratna (near Goalpara) and traverses the entire width of Assam state. The total length of NH -37 is 740 km, out of which a 66-km stretch runs parallel on the southern boundary of Kaziranga National Park. “The road divides the landscape between the low-lying grasslands of Kaziranga in the north and the elevated Karbi Anglong hills in the south. During rainy season when flooding in Kaziranga National Park forces the wild animals to move southwards to elevated ground, many wild animals are killed by vehicles while they attempt to cross NH-37,” says the petition.

As per the petition on an average 5,000 vehicles pass through the highway every day. This and the construction along the road has restricted the wildlife movement in the corridor between Kaziranga and the Karbi Anglong hills and has resulted in countless deaths of endangered wildlife species including tigers over the years.

RTI applications filed by Choudhary have revealed that instead of diverting the existing road, government plans to widen the existing two lane highway. A contract for this purpose has been awarded in June this year. The petition has, therefore, sought stay on the expansion of the road and taking action against the authorities for non-compliance with the conditions in the environment clearance granted to the Numaligarh refinery.