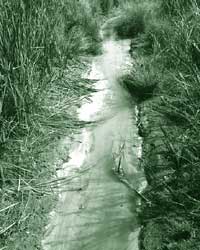 Serious violations of environmental norms by pesticide manufacturers came to our notice through this shocking account by researchers from the department of zoology, Delhi University. They visited Chinhat Industrial Area near Lucknow and found stark evidence of toxic waste containing residues of hexachlorocyclohexane (HCH) being disposed of by the units through a drain and also at a dump some distance away. The researchers found high levels of HCH in various soil and water samples they tested.

This kind of research is a rarity. Although we keep hearing about waste from pesticide industry contaminating the environment, hard empirical data and specific case studies are hard to come by. How did this study come about? "We have been working, for a long time, on methods to decontaminate HCH waste and wanted to test them at an actual site," informs Rup Lal, professor at the Molecular Biology Laboratory, who headed the team of researchers. "We knew of the industries that manufactured HCH and decided to visit them. Although we expected to find a dump, what we did not expect was dumping happening on such a large-scale on government land," Lal adds. One thing led to another and Lal's team unearthed a deadly secret.

Research related to pesticides is mostly limited to measuring their levels in various kinds of samples (such as of water and soil), including farm produce. But this research is different. "We have gone to the source of HCH contamination and learnt how it actually happens," says Lal. He says his team will be on the job for the next few years. But this time to try and decontaminate the affected area.

This study exposes what is horribly wrong in our regulation of pesticides and polluting industries. As Lal puts it, "Manufacturing one tonne of the pesticide lindane generates nine tonnes of highly toxic and persistent waste." It's about time we learn where all that waste is going. Their account follows:
Human life seems cheap to the Indian pesticide industry. Why else would the manufacturers of toxic chemicals adopt a highly apathetic attitude as they set all environmental rules and norms aside? Even those who profess interest in safeguarding the environment remain largely ignorant of how grave a problem pollution is.

We visited industrial units in Chinhat, Lucknow in October 2004 which manufacture hexachlorocyclohexane (hch), a pesticide used extensively and indiscriminately in agriculture and against mosquitoes in health programmes for over 50 years now. This has caused widespread contamination of our food commodities and the environment. The problem was highlighted in a leading newspaper last year and also in a report published by the Centre for Science and Environment, New Delhi, which found mineral water and even soft drinks contaminated with the chemical.

The pesticide is produced by adding chlorine to benzene in the presence of ultraviolet light. The reaction produces a mixture of four isomers (which are variants with same chemical constitution but different physical and/or chemical properties) called alpha (a)-, beta (b)-, gamma (g)- and delta (d)-hch in the ratio 70, 12, 10 and 8 per cent respectively. Among these, only g-hch, or lindane, has the insecticidal property but its separation from other isomers requires several steps to be carried out. Thus, for purely economical reasons, two forms of hch have been extensively used in India: lindane and technical hch, which is a mixture of the four isomers.

But in 1997, a partial ban on lindane restricted its use to 500 tonnes annually. After lindane is extracted, the other isomers are treated as waste that, albeit toxic, is dumped in the open. Also, chemical industries in India continue to make technical hch for exports and this is also sometimes sold to farmers.

What we face now are two types of hch contamination: (1) low levels of contamination of soil system and (2) high level of contamination due to the disposal of a-, b-and d-hch at the production sites. The gradual leaching out of toxic chemicals from disposal sites are proving hazardous for people living in the vicinity.


All the four hch isomers are resistant to metabolic and microbial degradation, and so pose a serious problem of environmental contamination. The compact spatial structure of b - hch (see figure: Lethal lattice) further confers a greater physical and metabolic stability on this isomer. b-hch residues have been predominantly reported from soil, water and food commodities. Very high levels of this compound persist along the dumping sites. b-hch is highly toxic to mammals and has been reported to disrupt endocrine processes. It accumulates in living things due to its low solubility and highly lipophilic (having a strong attraction for fats) nature.

We were keen to know if unregulated disposal has anything to do with recent reports of hch residue in water and even soft drinks. We, in the Delhi University, have been pursuing the problem posed by hch contamination and trying to evolve bioremediation technologies to deal with it. Our efforts over almost a decade have led to the development of a bacterial inoculum (strain) called Sphingomonas paucimobilis b 90 a that can degrade all hch isomers. Over the past five years, we have completed studies on physiological, biochemical and genetic aspects of hch degradation in this bacterium. It has been found to decontaminate hch polluted sites in small-scale field trials conducted at the department of zoology.


As the next step, we wanted to carry out field trials as part of a research project sponsored by the Department of Biotechnology and the Swiss Agency for Development and Cooperation. In this connection, we visited pesticide manufacturing units in Lucknow from October 11-12. The units are located in the Chinhat Industrial Area (located on Devan Road, some 25 km from Lucknow Railway Station). We reached our destination at 3:00 pm and visited a factory manufacturing lindane for home consumption and also for export.

Permeating the premises was an odd smell that became unbearable after some time. The workers and the labourers handling the waste and chemicals seemed unaware of their toxicity. They were not wearing gloves or masks and looked sick and pale. When asked if they had any disposal problems, the manufacturers told us they had developed a process to convert the waste to trichlorobenzene, a chemical that is exported to the us, among other countries. However, when we were escorted to the muck yard where the waste was stored, we were astonished to see a huge amount of the toxic chemicals kept next to a nallah (a small drain), probably waiting to be dumped in.

After we left the unit, we surveyed the adjoining barren land, taking samples from different locations closer to the muck yard around the nallah. Soil samples were also taken from the area falling within a 250 m radius of the muck yard. We also took samples from farms near the factories, where rice crop was almost ready for harvest.

Just before leaving for Lucknow, we asked the labourers/ workers of the area if they could give us any clue of how and where the waste from the units was disposed. One person, who was engaged in digging out the waste and taking it back to the factory for making trichlorobenzene, revealed that till 5 months ago, the waste used to be dumped some 20 km away on government land situated at Ummari village, which falls in Bara Banki district, along the Devan road.
We then set out for the village (although it was a bit late in the evening) to try our luck to see if we could locate the dumping site. We reached the village around 5:30 pm. We saw a brick kiln and met a person who appeared to be its caretaker. He said the dump was about a kilometre away and offered to take us there. He told us the waste used to be dumped there for 5-6 years.

When we reached the site, we were surprised to see a huge pit -- a squarish patch with each side almost 70 metres long and 2 m deep -- completely filled with white hch muck (see map: Poison dump).

The area around the dump was devoid of vegetation. We were shocked to see a hut barely 5 metre away from the hazardous heap. A family of five lived there -- Ram Kishan, his wife and their three children. They owned some land nearby that they farmed. We were curious to know how the pit was formed. Ram Kishan told us it was created after the soil was dug out to make bricks over the years (more than 5 years as far as he remembers). After the pesticide units discovered it, they started sending truckloads of waste that were emptied into it.

Ram Kishan is trying his best to have the toxic waste removed. He took up the matter seriously when his cattle fell sick and started dying gradually after drinking contaminated water. After running from pillar to post, he managed to lodge a complaint with the district magistrate last May. A month later further dumping stopped but the dumped waste has not been removed. Wheat, rice, capsicum and other crops have suffered extensive damage due to the dry muck blown by winds and carried to fields through rainwater. Our enquiries further revealed that the family had nowhere else to go and must continue living next to the lethal waste which had polluted the air they inhaled, the soil of their fields and the water they drank, and which would ultimately kill them.

After having witnessed a death trap created by the industry that will probably continue poisoning humans, cattle and other living organisms for at least 100 years, we left Ummari village for Lucknow. On our way we took samples (soil and water) to see how this contamination could affect adjoining areas.

We have now analysed the samples collected from different locations and found the hch levels are extremely high (see table: Danger signs).

So we will continue getting hch residues in soil, water, mineral water, soft drinks as the toxic waste is not biodegradable and will stay for hundreds of years.

We do not think that the family members and the cattle by the side of the dumping site will survive long. We were informed a few days back that the calf delivered by the buffalo a month before, which looked normal at the time of birth, has now become crippled (not able to move the hind limbs).