Wastewater treatment plant that also functions as a garden 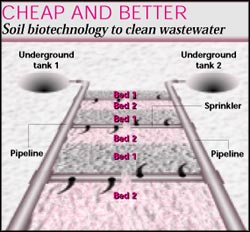 a garden that also cleans your wastewater -- this is what researchers from the Indian Institute of Technology (iit), Mumbai, have in store for residential colonies and industrial complexes. "Our method, called soil biotechnology (sbt), treats wastewater in a manner similar to what happens in the nature," says H S Shankar, the lead researcher, who is a professor with iit's department of chemical engineering. Unlike most biological wastewater treatment technologies that are dependent upon water, sbt uses soil as the medium to treat human waste. "Both water and soil comprise dead carbon, but unlike soil, there isn't enough oxygen in the water to treat the waste adequately," explains Shankar. Moreover, chemical oxygen demand (cod), whose high value is indicative of poor water quality, decreases faster in soil than in aquatic environment.

In a typical sbt treatment plant, wastewater is diverted into a cemented pit called tank 1 (see diagram: Cheap and better). A small area in the centre of the tank is enclosed by a wire mesh to keep the debris out. The water collected in the central part is pumped into a nearby plot, which has a membrane lining at the bottom to prevent water from seeping into the ground. Instead of letting the wastewater flow all over the plot, it is sprinkled into beds marked 1; these consist of layers of gravel to remove the suspended and organic particles from the wastewater. From these beds, the water flows into another pit called tank 2. Thereafter, it is again pumped into the plot for secondary treatment. This time, it is sprinkled on beds marked 2, whose top layer is covered by creepers and shrubs to fix the nitrogen of the wastewater. A culture of microorganisms is introduced in the underlying layers of the beds to remove the dissolved substances from the water. "The culture consist of bacteria and earthworm; the bacteria consume the organic matter in the wastewater, and their number is regulated by the earthworms," tells B R Pattanaik, one of the iit researchers. The process of secondary treatment is repeated for four to five hours. "As a result of such thorough treatment, the quality of the water is very good; it is then pumped through an underground pipeline for irrigation," informs Pattanaik.

There are seven such treatment plants in Mumbai. Three more are coming up -- one in Mumbai and two in Gujarat. In Mumbai's Western Naval Command colony, where such a plant has been in use since 2001, a 500-square metre plot is cleaning 50 cubic metres of water per day. If there is a space constraint, as is the case in many areas, then the depth of the beds can be increased and the composition of the culture can be accordingly altered. The plot does not get waterlogged when it rains.

A sbt plant treating five cubic metres of wastewater per day needs an initial investment of Rs 2.45 lakh. Operational cost for such a plant is only Rs 20 per cubic metre, and it decreases significantly as the capacity of the plant is increased. When compared with other biotechnologies, its cost per person is very low. "For instance, in case of rapid infiltration and overland flow technologies, the cost is between about Rs 230-Rs 680 per person, but for sbt it is only about 70 paise to Rs 1 per person on an average," says Avinash Kadam, another researcher. The technology can also be used for cleaning the water of swimming pools, ponds and lakes. The researchers have filed an application to obtain a us patent for the method.

A community can easily manage the treatment plant. This, according to Shankar, is one of the biggest advantages of sbt. "If we have very mechanised and power-intensive technologies, communities will not be able to adapt them. This is the reason why water recycling is not very popular as of yet. Most of the times, water is treated merely to meet standards set by various regulatory bodies," says Shyam R Asolaker, associate professor, iit Mumbai.