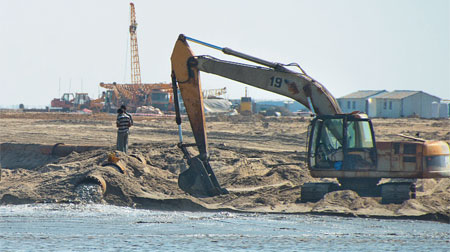 The Gujarat High Court has ordered a stay on the construction of individual units in Gujarat's Mundra special economic zone (SEZ). These companies were going ahead with construction in spite of the court's last year's order that halted work because the developer had commenced work without obtaining the mandatory environmental clearance first. These individual units have imported goods and availed duty exemption of Rs 3,300 crore till now and were operating without any environmental clearance.

The multi-product Rs 14,000 crore SEZ in Kutch is being developed by Adani Enterprises which had started building roads and flyovers, and a joint venture company, Alstom SA Bharat, had started construction work for its power project in the SEZ when the high court halted work at the site last year. But some other companies went ahead with construction of their individual units.

In all, 12 companies were found constructing their units in the SEZ, prompting the filing of a fresh petition. “We filed a fresh petition as the construction continued without any environmental clearance,” says the legal counsel for the affected village residents, Anand Yagnik.

A bench comprising chief justice Bhaskar Bhattacharya and Justice J B Pardiwala issued notices to all the 12 companies. The bench also sent notices to the Union Ministry of Environment and Forests (MoEF) and the managers of the SEZ. The next hearing is likely in another 15 days. Adani or the individual companies were not available to comment on the latest court order.

According to one of the petitioners, Jajubha Bhimji Jadeja, a resident of Navinal village in Kutch, the 12 companies not only developed their units but also imported goods worth Rs 2,086.89 crore in 2010-11 and exported goods worth Rs 302 crore. “Further, the companies also received an import duty exemption of Rs 3,300 crore in spite of no environment clearance from MoEF,” said Jadeja in the fresh petition.

Earlier, fisher people of  Navinal had filed a petition, saying their daily fish catch has been affected by the construction activity at the Mundra port; the port and the SEZ are part of an integrated project. Right To Information replies and other documents showed that most of the Mundra SEZ is situated on village common land used for grazing.

On February 11, 2011, responding to a public interest petition by Mundra’s farmers, the Gujarat High Court served a notice to the Adani group and the revenue department of the Gujarat government for illegally taking 93.48 hectares (ha) of Navinal's pastures for Mundra SEZ. Navinal is just one of 23 villages whose sarpanches sold grazing land for the project, spread over 18,000 ha, by allegedly keeping the gram sabhas (village councils) in the dark.