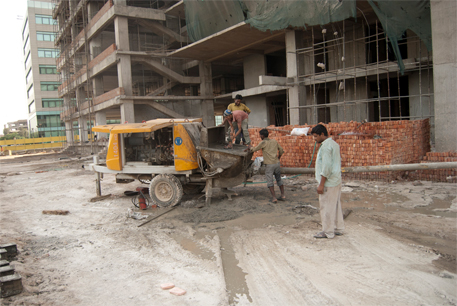 An order of the Punjab and Haryana High Court dated July 16 has barred Gurgaon's civic agencies from issuing any fresh construction permissions to builders. The high court bench headed by chief justice Jasbir Singh has also summoned senior town planning, urban development and irrigation department officials to the court on July 31 to explain how they will manage groundwater use in Gurgaon and submit all the relevant data.

The court’s order is in response to a petition filed in 2008 by Sunil Singh, a lawyer, alleging that real estate giant DLF was illegally operating 28 wells to service its commercial office hub, Cyber City. The scope of the case expanded to check rampant extraction of groundwater across the city and also ensuring adequate piped water supply.

“If the development and construction is not sustainable then a moratorium should be issued, and the court is in agreement with us,” says Amit Singh, lawyer for petitioner. “The respondents are behaving as if unabated construction is a god given gift,” he adds. But a complete ban of groundwater, although desirable, may be impractical. People have invested in projects where more than 20,000 labourers are employed. But then piping more and more water from great distances is not a viable solution. This is why the court in March this year had directed the Central Ground Water Authority (CGWA) to file a comprehensive affidavit by May 1, outlining how it would regulate groundwater use. CGWA has sought extension of the court's deadline. The court has been asking CGWA to give details of groundwater levels in the fast expanding industrial and financial hub since  May last year.

Gurgaon was completely dependent on groundwater till 1995 when the city authorities built a 69 km channel to bring water from the Western Yamuna Canal, an irrigation source for Haryana and Uttar Pradesh. This canal meets just 30 per cent of the city’s water needs and most users are dependent on groundwater, says R S Rathee, president of a residents’ welfare association.

HUDA rubbishes these claims. According to its officials, infrastructure is in place for the city’s current population of 1.6 million, and the authorities are in the process of securing water for another 2.7 million. As per their data, water requirement in 2021 would be 918.75 million litres per day (MLD), which will be met through its two dedicated canals— Gurgaon Water Supply Channel and the newly constructed NCR Canal for fetching water from the Yamuna river.

In an earlier order in the same case in February last year, the high court had ordered the city’s authorities to restrict the use of groundwater--depleting at three times the recharge potential--for drinking and domestic purposes; use of groundwater for construction was banned. It also ordered sealing of borewells used by builders. But none of the directives were implemented in earnest. The deputy commissioner's office undertook a ceiling drive after the order and a few hundred borewells were sealed. Many of these are operational once again.

CGWA has since submitted that this cannot be ascertained due to shortage of funds and manpower. It has requested the Centre for more staff to monitor groundwater extraction in notified areas where groundwater is overexploited. In the meantime, authorities cannot sanction any new project until further orders. Developers who are not a party to the case have been permitted to file a special leave petition in the Supreme Court to vacate the stay. “This is unlikely given the short time period (before next hearing). Besides, the Supreme Court will most likely ask them to file an intervention application in the high court,” says Singh.

The city agencies must invest in securing its local water endowment by looking at its rooftops to collect rainwater and better manage storm water, say water experts. Also, in certain cases, treated sewage can be recycled for not just horticultural purposes but also construction, they add. Water demand is generally believed to be 10 to 20 percent of the total volume of brick and concrete used in a building.