Haiyan to Lehar: how storms around the world are named

Phailin, Helen, Haiyan, Lehar and the rest get their names from a list specific to their region

We all must have often wondered from where cyclones, typhoons or tropical storms get their names. Here is a brief insight into why and how cyclones are named.

The practice of naming tropical storms began years ago with the motive to help in quick and error-free identification of cyclones in warning messages and to make it easier for media, which otherwise had to use numbers for longitudes and latitudes and other technical terms. Many also agree that the use of names also heightens interest in warnings and increases community preparedness.

Initially, cyclones were named after the places where they caused the most damage. Past records show that it was in the mid 1900's that the practice of using feminine names like Edna, Florence, Gilda, Hazel, Irene, Jill and Katherine for storms was adopted. Later, to make the process of naming storms more organised, meteorologists decided to identify storms using names from a list arranged alphabetically and accepted internationally. It was in 1973 that the forecasters started using male names for those forming in the Southern Hemisphere.

The process of naming cyclones is conducted by regional bodies, each known as Tropical Cyclone Regional Body, and is kept under the aegis of the World Meteorological Organization, a UN body. At present, there are five regional bodies, classified on basis of five ocean basins, and each body follows a strict procedure to annually or biennially determine a list of tropical storms which originate in the basin assigned to them. The names in the lists are proposed and decided by the members of the regional bodies.

While some regions have decided to repeat the lists after a fixed period of time, some use the lists only once and move on to the next list. World Meteorological Organization has decided that the selected tropical cyclone names should be familiar to the people in each region.

For the Indian Ocean region, the process of naming storms is as recent as 2004. After a series of deliberations, eight countries in the region contributed a few names to the list given below. 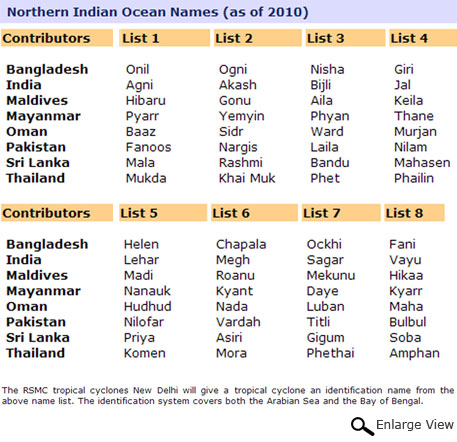 According to the list shown above, the first cyclone which occurred in the Indian Ocean in 2004 was named Onil. The second cyclone to hit the Indian Ocean was named Agni, a name submitted by India. Since then, the cyclones have been named according to the list approved by the regional body with the recent one being Cyclone Lehar. The above list clearly suggests that the next cyclone /storm will be called Madi (a name suggested by Maldives).