New technology to develop steel is on the forge 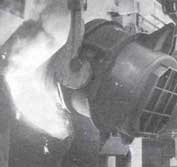 THE direct steelmaking process, long the holy grail of researchers around the world, may soon be reality. Scientists from Nucor, a US steel producer, have identified iron carbide as a new raw material for steelmaking. The new technology aims at producing steel directly from iron carbide, cutting out expensive and environmentally sensitive parts of traditional integrated steelmaking, such as the use of electric arc furnace and blast furnace.

Direct steelmaking with iron oxide, explains Kenneth Iverson, chairperson of Nucor, would be a 2-stage process. In the first stage, the iron carbide is placed in a chamber with oxygen. Heat generated from the reaction converts iron oxide into liquid iron carbon alloy, apart from releasing carbon dioxide gas. In the 2nd chamber, the molten iron is exposed to more of oxygen, releasing enough energy in the form of heat to refine iron into steel. Says Iverson, "We will be using iron carbide and oxide and there will be no electric arc furnaces or blast furnaces."

On the other hand, the direct steelmaking process gives out water, nitrogen and slag, but the only potentially harmful emission is that of carbon dioxide. Gordon Geiger, a cosultant with US Steel, estimates that this would be 282 kg for every tonne and that there is a potential of recovering it commercially. The cost of liquid steel from this process is expected to be US $ 140-150 a tonne, which is less than the cost of electric arc or blast furnace in the US.

Speaking on behalf of the director, Research and Development Centre for Iron and Steel, of the Steel Authority Of India Limited (SAIL), R K Nandi says, "The steelmaking process of Nucor is a 2-stage process. SAIL's R & D Centre is currently developing an ore-to-steel process in which the oxygen of the ore is continuously reduced to produce steel. It is, in a sense, truly single stage and a direct steelmaking process."