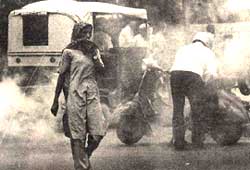 THE CITY of Bangalore may go the Delhi way -- at least in the area of pollution. The garden city's administration is on the warpath to make Bangalore a "noiseless," pollution-free city, unlike the capital, where 30 per cent of the population suffers respiratory disorders and thousands of vehicles belch smoke.

The measures include disallowing vehicles that spew smoke and using imported equipment to check the emission levels of vehicles. The administration is also considering banning eco-unfriendly vehicles like two-stroke engined two-wheelers. Environment minister B. Basavalingappa said, "Two-stroke engine factories will have to close."

Vehicle owners in Bangalore are queueing up for pollution-free certificates. But not without complaint. Car and scooter owners grumble, every bit like in Delhi, about being harassed, contending that pollution is really caused by government buses and cars. Will Bangalore succeed or will it ape the Delhi way of polluted living?