Earlier increase in tax ineffective in deterring smokers as it focused on length of cigarettes and led to production of shorter length cigarettes, says Union health minister 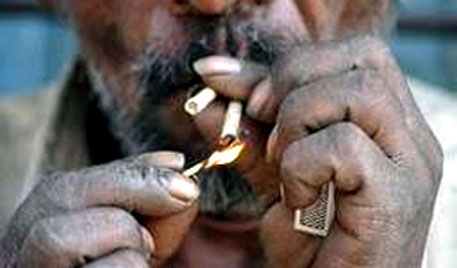 As the new Bharatiya Janata Party-led government prepares to present its first budget in Parliament on July 9, the Union Ministry of Health and Family Welfare urged the finance ministry to increase taxes on smoking tobacco products significantly.

In a letter to the finance minister Arun Jaitley, dated June 19, Union health minister Harsh Vardhan has urged him to impose a tax of Rs 3.5 per stick on cigarettes and bidis to curb smoking.

Use of tobacco imposes huge cost to the country as it forces 15 million Indians into poverty every year, he argues in the letter.

Cause of 1 million deaths a year

Highlighting the impact of cigarettes and bidis, he says that it causes about one million deaths a year in India. The absolute number of male smokers has increased from 83 million to 105 million over the past decade.

The previous Congress-led UPA government had increased cigarette tax by 19 per cent in its February 2013 budget but it was too low to make any impact, the minister says in the letter.

The reason behind this, according to him, was that the tax focused on length of cigarettes. The industry simply produced shorter length cigarettes, which negated the possible public health benefits of tax increase on tobacco products, Vardhan says.

For this reason, he has requested Jaitley to consider substantially increasing tax on cigarettes of all lengths. It will prevent the industry shifting production and marketing of lower length cigarettes as has been the past practice, he says.

In his opinion, the proportion of specific tax on cigarettes as a percentage of their retail price from about 45 to over 60 per cent would conservatively lead to about three million smokers quitting and nearly three million children not picking up the habit.

This will save at least four million lives and the hike in tax would bring in at least Rs 3,800 crore more by way of excise revenue for the government, claims the minister.

About the bidi industry, he says that it has continued to remain largely unregulated and has enjoyed several exemptions. This has enabled the manufacturers evade taxes and exploit bidi rollers. The industry has grown in size and magnitude but bidi rollers’ condition has consistently deteriorated.

There is an urgent need to regulate the industry by removing the exemption on tax given to bidi manufacturers producing less than two million bidis and redefine taxation points in the bidi tax policy to ensure collection of revenue, prevent tax evasion in the long run and, thereby, regulate the industry, the minister says.

He has also touched upon the issue of smuggling cigarettes and suggests on the basis of evidence from other countries that the cigarette industry itself promotes smuggling. If it is restricted, the hike in taxes will show extremely positive results, he says.

Earlier, Vardhan had promised to make efforts to curb tobacco consumption in India. He expressed his commitment while releasing a report prepared by Public Health Foundation of India (PHFI) in the last week of May.

Report: WHO report on the global tobacco epidemic, 2013