Mangar development plan proposes universities, mega tourism projects and quarries in one of the last patches of forests having trees native to Aravallis 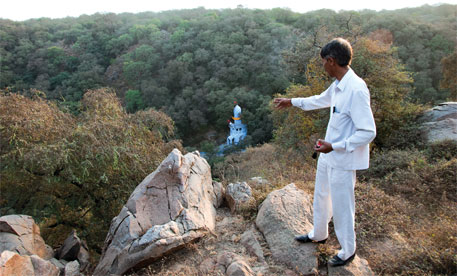 The Union environment ministry's request to the Haryana government to protect the natural forests near Mangar village on the outskirts of Delhi seems to have gone in vain. The state is all set to finalise the Mangar Development Plan 2030. It proposes non-forest activities in the ecologically sensitive Aravalli hills near Mangar village in Faridabad, which includes Mangar Bani. The forest is one of the last patches of the  natural Aravalli forests. The Bani, with its native tree species, has been protected by the village residents for centuries as a sacred grove (See ‘Unhappy Bani’).

It also happens to be a habitat to several wildlife species and acts as a ground water recharge zone in the denuded Aravalli hills.

The draft plan, notified on May 17, classifies the plains and hills in the area as agriculture zone and proposes development of universities, godowns, bus-stand, railway station, power plant sub-station and dhabas in the area. Even lime and brick kilns, and stone quarrying and crushing are sought to be allowed. “Mega Tourism Projects” of up to 500 ha are also proposed in the region. The Bani and the surrounding hills are not protected by the Punjab Land Preservation Act (PLPA) of 1900 which does not permit non-forestry activities on land covered by the law. The Supreme Court's direction to protect areas under Aravalli plantation scheme also does not cover these forests.

A few environmentalists and researchers had complained to the Union environment ministry that Bani and the surrounding natural forests comes under the Supreme Court’s definition of forests and need to be protected as deemed forests. They feared that the Mangar Plan, which was under preparation then, might pose a threat to the Bani and the ecology of the region. The ministry then asked the Haryana government on May 18 to prepare and submit a geo-referenced map of all the natural and recorded forests of  Faridabad district.

It requested the state government to keep in abeyance the Mangar development plan till such forests are identified.

The town and country planning department of Haryana, however, went ahead and prepared the draft Mangar development plan, giving the public 30 days to send suggestions and objections on plan from the date of notification. But the public hardly got time to respond because the notification was uploaded on the department’s website only on May 31. “We heard that the draft plan has been finalised but it was never publicised. It's only when we pressurised them to make the draft public that they uploaded it on the website. I would not be surprised if they had intentions to finalise the draft secretly without placing it before public for suggestions and objections,” said an environment researcher who has been fighting to save the Bani.

Photo Gallery >> A walk through Mangar Bani, a sacred grove near Delhi