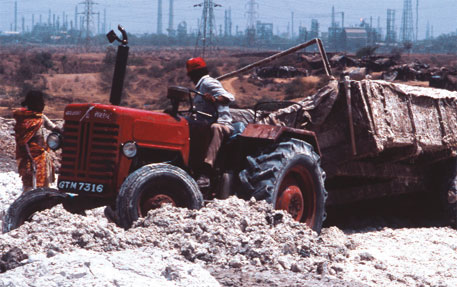 IT TOOK the Union Ministry of Environment and Forests (MoEF) five years to reply to the Supreme Court. It has submitted an affidavit giving details about the status of compliance with 29 directives on hazardous waste, which the apex court had passed in 2003. But experts say the document is not comprehensive and is misleading.

The affidavit was submitted on November 9 after the court ordered MoEF to give a detailed status report on the directives in October this year.

The court had set up a 10-member Supreme Court Monitoring Committee (SCMC) to ensure compliance with the directives and to monitor hazardous waste handling in the country. SCMC became non-functional in 2006 and the monitoring responsibility fell on the shoulder of MoEF. Since then the court has been asking MoEF to submit an affidavit. The directives were issued in the wake of a public interest petition filed in 1995 by non-profit Research Foundation for Science, Technology and Natural Resource Policy.

The court’s order in October asked MoEF to refer to the directives, the last SCMC report of 2006 and another report by D B Boralkar and Claud Alvares, both SCMC members, and a letter written by the petitioners saying MoEF has failed to respond to queries regarding compliance with the directives.

The affidavit states that significant work has been done to improve hazardous waste management in the country in compliance with the directions. But Sanjay Parikh, senior advocate representing the petitioners, says, “It overlooks pertinent aspects, like the ship-breaking industry.” It is a clear mutilation of the directives, adds Gopal Krishna, an expert on hazardous waste. To simplify matters, MoEF should have submitted a table, listing compliance or non-compliance with the directives, he adds. Each directive had a specific time frame within which it was to be implemented (see: Supreme Court seeks status report on hazardous waste directives). Parikh says there is absence of any reference to the Alvares-Boralkar report and the 2003 directives. As per the court’s 2003 order, MoEF should have submitted the affidavit first to SCMC, and SCMC should have forwarded it to the court after cross checking the claims. Referring to SCMC being non-functional, Boralkar says, “It has not been disbanded officially.” Objecting to the content of the affidavit, Boralkar says, “MoEF could have circulated the court order to the different states asking them to submit compliance reports and reasons thereof.” Instead it has taken it upon itself to justify the lapses through ambiguity, he adds.

Parikh explains that many points in the affidavit are too general showing very little work has been done. For instance, it says the number of identified illegal hazardous waste dump sites has decreased from 141 to 69, but it does not mention where, when or how it happened. Similarly, as per the directives, each district in the country is supposed to have at least one waste disposal facility. But till today many states, including Delhi, do not have such facilities and the ones that have are not functional. The affidavit says there are 16 functional hazardous waste treatment, storage and disposal facilities in the country. Krishna alleges, “The affidavit is an attempt to divert attention from the directives and the ambiguities in the affidavit seem deliberate.”

Rajiv Gauba, joint secretary, MoEF, says, “The affidavit is to the best of our ability.” Vinod Babu, in-charge of the hazardous waste division of the Central Pollution Control Board, adds the 2003 directives are not in tune with the time. “Since then, the ministry as well as the board have moved ahead and done work beyond the scope of the directives.”

In the next hearing of the case on December 15, the petitioners would request the government to file a revised affidavit.