Total damage to India because of environmental degradation is US $ 80 billion, says first such national-level economic evaluation made by World Bank 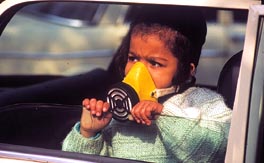 Introducing policy interventions such as environmental taxes could potentially be used to yield positive net environmental benefits with minimal economic costs for India. According to a new World Bank report released on Thursday, India could realize an additional benefit of around US $59 billion with a PM10 tax.

The latest number crunching by the World Bank is an eye-opener. Its evaluation of the damage to health from a gamut of environmental factors—including air pollution, inadequate water supply and poor sanitation—shows outdoor air pollution takes the maximum toll in India. This is followed by indoor air pollution.

The report states that higher cost of outdoor and indoor air pollution is driven by high exposure of the young and productive urban population to particulate matter pollution. That leads to higher rates of deaths due to cardiopulmonary and chronic obstructive pulmonary diseases among adults (see box).

It is first-ever, national-level economic assessment of environmental degradation in India that establishes the enormous cost air pollution imposes on India’s economy. The cost of serious health consequences from particulate pollution is estimated at 3 per cent of India’s GDP.

The total damage because of environmental degradation amounts to Rs 3.75 trillion (US $80 billion). This is equivalent to 5.7 per cent of the country’s GDP.

The most serious message for setting policy that has emerged from this study is that benefits from investments in damage mitigation far outweigh the health cost of no action.
The study has established that while particulate matter mitigation will cost money, it will be offset by the benefits in terms of reduced health cost. About 10 per cent reduction in PM10 by 2030 can yield a benefit of US $ 10-20 billion and 30 per cent reduction can yield a benefit of  as much as Rs USD 47-105 billion.

“A low emissions, resource-efficient greening of the economy should be possible at a very low cost in terms of GDP growth. This makes green growth scenario attractive,” Muthukumara Mani, seniour scientist with the World Bank, said when releasing the report.