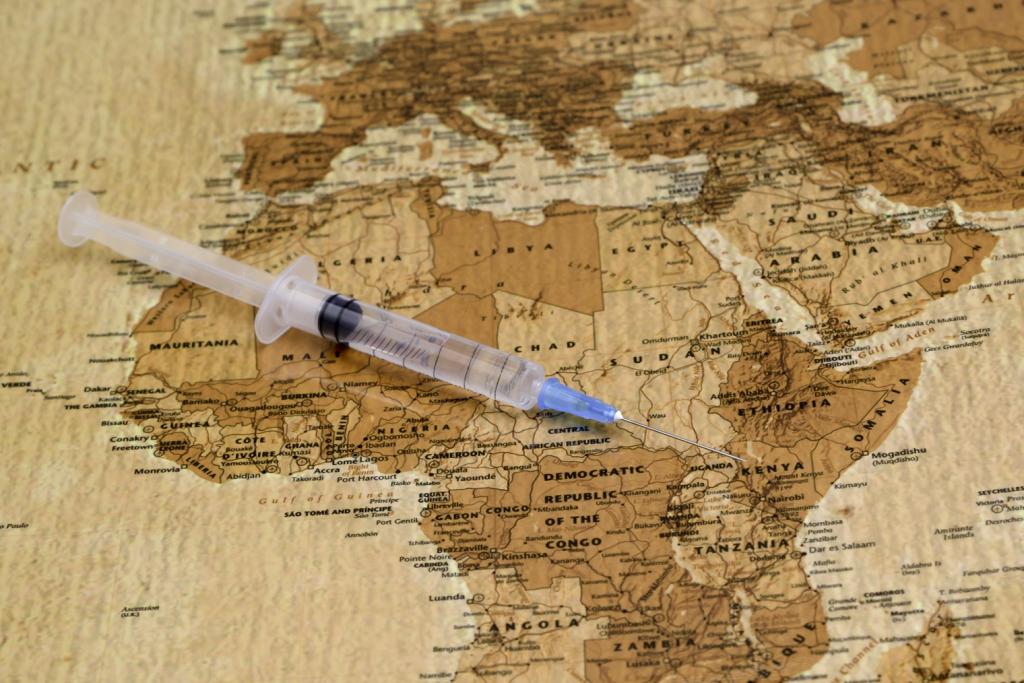 If you are an African, you are likely to live shorter than people elsewhere. Credit: Getty Images

If you are an African, you are likely to live shorter than people elsewhere. Be it child mortality, maternal mortality or the risk of death from non-communicable diseases, the continent grapples with healthcare issues. Small initiatives, however, are springing up in several countries to help the citizens. Down To Earth focuses on a few of them.

United States-based AIDS Healthcare Foundation (AHF) has collaborated with the country’s Ministry of Health through Rwanda Biomedical Centre to set up round-the-clock kiosks to distribute condoms for free.

The initiative, started in May 2016, is aimed at reducing new HIV infections as well as focus on family planning, says Narcisse Nteziryayo, in charge of prevention activities at AHF-Rwanda. A kiosk typically vends out 3,000 condoms a day, reaching up to 7,000 pieces in the weekends and totaling to about 28,000 pieces a month. At the end of the first year, over a million condoms were distributed.

Capital Kigali currently has five such kiosks. “As new infections continued, we thought about how to make condoms accessible,” Nteziryayo says. According to him, the facility kicked off at hospitality centres and was later expanded to cover those who don’t have access to hotels.

After the success in Kigali, the program has been expended, especially in borders areas. Every kiosk is put under the charge of a person who receives a monthly allowance. It takes $10,000 to keep a kiosk running.

The number of people infected by HIV has been a steady 3 per cent for over a decade now. They receive free antiretroviral therapy regularly.

“We welcomed the kiosks as they made condoms free. Earlier we paid 100 Rwandan francs (11 cents) for a pack of four; at times we preferred not to use them to save money. We hope more kiosks come up in other locations,” Nadia Kaneza, one of the kiosk users in Kigali, says.

About three million condoms are imported per year, which will be increased to four million from the next. Kasha, an online health service supplier, is now planning to start delivering the condoms from kiosks to other destinations.

The youthful father of one employs a nurse and a pharmaceutical technologist at each clinic, among them an eight-bed facility that admits inpatients.

The fund (AEF) was founded in 2013 to address the shortage of health personnel in Kenya by offering support through loans to students for enrolling in medical training institutes, says Wasunna Owino, HRM Kenya, head of party.

“The aim was to address the critical shortage of frontline health professionals who offer ‘promotive’ and preventative health services in dispensaries and health centres-at community level,” he told Down To Earth in Nairobi.

It started with a $1.19 million seed money from the United States Agency for International Development, $100,000 from the health ministry Health as well funds from other contributors including Rattansi Education Trust.

The money was meant to be lent to the most needy students, including those with disabilities, orphaned, from disadvantaged backgrounds and marginalised areas. The Higher Education Loans Board (HELB), a government agency speacialising in disbursement of education loans, was roped in for effective execution.

“We decided at the outset that this wouldn’t be a scholarship, but a revolving fund—those who benefit repay,” Owino says. Beneficiaries get a one-year grace period to start paying back over five years.

Between $400 and $700 per year is offered to a student, equivalent to tuition fees for the average $1,500 total fees medical colleges charge per year.

The fund is now trying to partner with governments, says Owino.

The Healthy Living Alliance (HEALA) works towards providing access to healthy food and clean water to all within a healthy and sustainable environment.

“We see a high burden of obesity-related diseases in South Africa,” says HEALA Director Sibongile Nkosi. “The situation is complex. Despite high rates of NCDs, people continue to drink Coca-Cola and eat carbohydrate-dense food,” she adds.

Established in 2016, HEALA is an alliance of seven South African non-governmental organizations instrumental in the advocacy and implementation of health promotion levy—an 11 per cent tax on sugary beverages was introduced in April. “We lobbied with parliamentarians and political parties to vote for the tax, and tried to raise public awareness of the dangers of sugary drinks through mass media,” Nkosi says.

HEALA is now working on a campaign to remove junk food and sugary drinks from schools, targeting school feeding schemes, tuck-shops, vendors, the marketing of junk food for children and understanding of food labels by students.

HEALA also has educational campaigns to raise awareness about the impact of diet on health: “We take Coca-Cola products, including energy drinks and ice tea, and calculate their sugar content with the help of the children. Then we show them how much sugar they contains by putting teaspoons of sugar in a glass,” Nkosi says.

An earlier campaign through outreaches at clinics tried to educate pregnant women about the link between stunting and obesity.

The west African country has adopted ‘One Health’, an approach to tackle human and animal diseases as well as environmental pollution.

The source of the 2014 Ebola outbreak could be traced to wild fruit bats in Meliandou, a village located in the Gueckedou prefecture of Guinea. Medical researchers believe that the village was the location of the first known case of Ebola virus disease in the epidemic in West Africa.

More than 11,300 people were killed mainly in Liberia, Guinea and Sierra Leone in the outbreak that commanded a hybrid national and international response. According to the World Health Organization (WHO), around 43 per cent of those deaths were in Liberia, where the epidemic peaked between August and October with hundreds of cases a week.

In the region where fruit bats and bush meat are a major delicacy, health authorities warn people against eating wildlife (animals) as a precaution, but that warning was being ignored in Liberia.

Months after the Ebola outbreak in 2016, One Health, a collaborative effort of multiple disciplines working locally, nationally and globally to attain optimal health for people, animals and the environment was adopted.

The initiative is supervised by a national secretariat, which works with the Ministries of Health and Agriculture, the National Public Health Institute and the Environmental Protection Agency (EPA). It depends on disease surveillance, community-based surveillance, facilities surveillance as well as regional surveillance.

Under the human resource technical working group, the secretariat will institutionalise training programs at the national level. “There is an ongoing capacity building programme for field epidemiologists,” Sieh says.

The ministries and agencies conduct joint planning, investigation and joint implementation. This allows for information sharing and joint supervision, he adds but admits that admits that Liberia lacks experts and equipment to detect and control chemical pollution on an industrial skill.

(This article is part of a series on healthcare in Africa. See links below)