Health minister asks authorities to be prepared for Ebola emergency

The present outbreak of the virus in West Africa has claimed nearly 5,500 lives 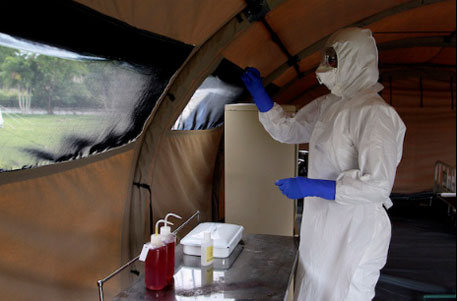 Amid the panic that was created after a 26-year-old Indian who travelled from Liberia to India was kept in isolation due to presence of Ebola virus in his body, Union health minister J P Nadda has reviewed the preparations to tackle any possible outbreak in India. The man who had recovered from the disease in Liberia has been placed in isolation at the New Delhi airport after traces of the virus were found in his semen.

On Tuesday evening, the minister emphasised that the health ministry should accelerate the action plan to build and strengthen the core capacities required under international health regulations on Ebola.

On the core capacity of laboratory support, Nadda emphasised the need to strengthen 10 such laboratories by the end of the month. To battle a possible crisis, the department concerned has been asked to develop short-term and long-term strategies for medical management of Ebola virus disease. The minister also stated that a large medical force that is available with the Union Ministry of Defence could be utilised if needed.

Meanwhile, it has been made clear that the 26-year-old man who reached India on November 10 will be kept under quarantine till his body fluids test negative and he is found medically fit to be discharged. On November 17, his semen sample, tested at National Centre for Disease Control, was found positive for Ebola virus. This means that the presence of virus in his semen samples may have the possibility of transmitting the disease through sexual contact for up to 90 days from time of clinical cure. Currently, this person is not showing any symptoms of the disease.

It is interesting to note that the person carried a certificate of medical clearance from the Ministry of Health and Social Welfare, government of Liberia.