African swine fever runs riot across Asia; Is India next?

A whopping 3.7 million pigs have been culled across East and Southeast Asia since the disease struck China in August last year

African swine fever (ASF), a deadly disease which affects herds of pigs and for which there is no cure, has wrought havoc in Asia according to a recent report of the United Nations Food and Agriculture Organization (FAO).

Experts say that India can prevent the disease by educating pig farmers and spreading awareness among them.

In the report, which was released on June 20, 2019, FAO has noted that ASF, which first came to prominence across the globe in 2018, has caused the deaths of more than 3.7 million pigs across a vast swathe of Asia, primarily in its east and south-east, where pork is the primary meat staple.

The grimmest situation is in China and Vietnam.

China, which is home to an estimated 680 million pigs and accounts for more than half of the world's pork production, has seen almost 1.2 million animals die or being culled since the virus was first detected on August 3, 2018.

“Since the China Ministry of Agriculture and Rural Affairs confirmed its first ASF outbreak in Liaoning Province, 139 outbreaks have been detected in 32 provinces/autonomous regions/municipalities/special administrative regions. More than 1,133,000 pigs have been culled in an effort to halt further spread,” the FAO report noted.

Across the Red river, ASF has wrought destruction in Vietnam as well.

“Since the Ministry of Agriculture and Rural Development confirmed its ASF outbreaks on February 19, 2019, a total of 58 provinces/cities reported outbreaks; more than 2,600,000 pigs have been culled,” the report said.

Outbreaks have also been reported from Cambodia, Hong Kong (a Special Administrative Region of China), Laos, Mongolia and North Korea. 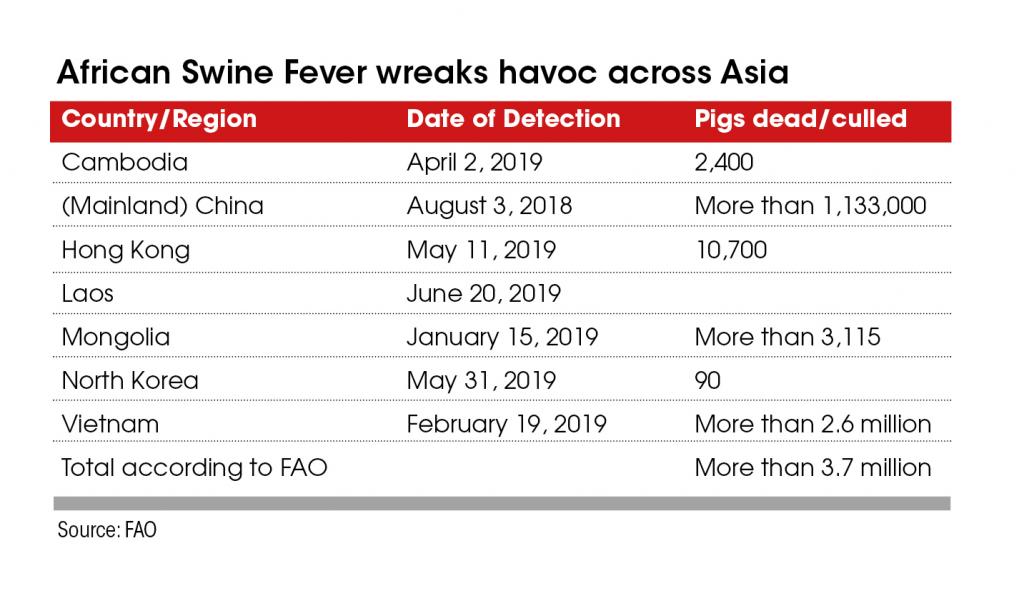 “This is the largest animal disease outbreak in history. We’ve never had anything like it," International news agency Associated Press (AP) quoted Dirk Pfieffer, a veterinary epidemiologist at the City University of Hong Kong, as saying.

The biggest damage caused by the outbreak is going to be to Asia’s pork industry. AP quoted Nethelands-based Rabobank as estimating that this year’s Chinese pork output may fall by up to 35 per cent. Vietnam’s pork production may decline by 10 per cent.

Since 2018, ASF has also struck non-Asian countries including Russia, Romania and the Ivory Coast. The disease can be transmitted through direct contact, poor sanitisation, insects, and even through processed meats, according to the US Centre for Food Security and Public Health.

According to government figures, pork production in India in FY 2014-15 (April-March) was estimated at 464,000 metric tonnes (MT) and contributed approximately eight per cent of the country’s animal protein sources.

Most of India’s pigs are of indigenous breeds (76 per cent) though the population of cross-bred and exotic pigs increased by 12.7 per cent from 2003 to 2012. Exotic breeds, including Hampshire, Large White Yorkshire, Duroc, Landrace, and Tamworth, have been imported to India, mainly in the north, in recent years to be bred and cross-bred.

Down To Earth contacted P Blahwar, joint commissioner at the Department of Animal Husbandry, Dairying and Fisheries, Government of India. He was unavailable for comment.

“I believe some states have issued advisories. Reporting any outbreak at the earliest, making people aware, keeping strict vigilance on the movement of pigs from other countries and prevent mixing of wild boar and domestic pig populations should be the priority of the authorities,” headed.

“India’s pig farmers are not very literate. Awareness camps by the government, media and piggery associations themselves could go a long way in keeping farmers alert,” he said.

There is truth in Singh’s words. The 2012 Livestock Census had noted that “most pig farmers belong to the lower socio-economic strata and undertake pig farming as a livelihood rather than scientific pig farming with improved foundation stock, proper housing, feeding and management”.