Are all nations doing enough on SARS-CoV-2 sequencing? Clearly not

India has submitted only 20 genome sequences as compared to UK’s 93,544 since new variant surfaced

As many as 1,750 scientists from 124 countries met virtually January 12, 2021 to discuss the emerging scenario in the light of new variants of the novel coronavirus — SARS-CoV-2 — being reported from different parts of the world.

The meet was convened by the World Health Organization (WHO). It discussed “the potential impact of emerging variants on diagnostics, treatments and vaccines”.

The meet happened in the backdrop of a new variant found in the United Kingdom belonging to the B.1.1.7 lineage, wreaking havoc and breaking all past records of single-day deaths.

Till date, it has spread to more than 40 countries, with some even reporting local transmission of the virus. 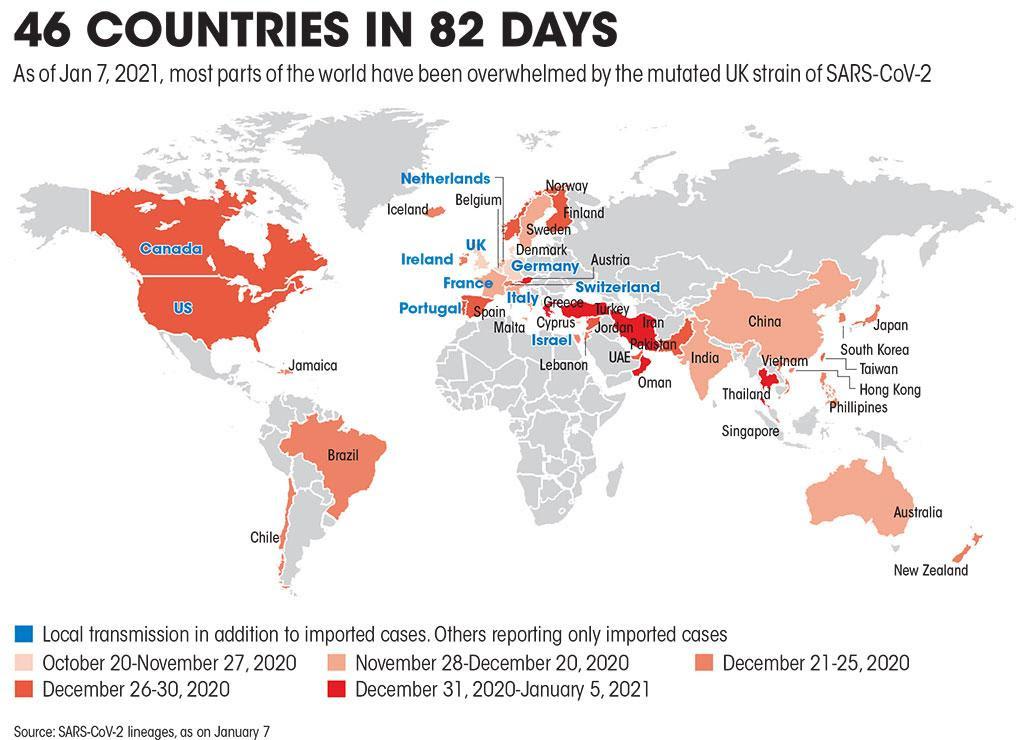 The press statement put out by the WHO also hinted that many countries were just not doing enough in terms of genome sequencing.

So far, an astounding 350,000 sequences have been publicly shared. But most come from just a handful of countries. Improving the geographic coverage of sequencing is critical for the world to have eyes and ears on changes to the virus

Genome sequencing helps researchers and policy makers understand if a new variant of a virus has emerged. Without this, the change may go unnoticed.

The WHO has been constantly asking countries to better their genome sequencing. It has also said on a number of occasions that if a country like the UK is reporting more cases with new variants, it is only due to better genome sequencing and surveillance. In other words, the more a country tries to find new variants, the more it may actually find them.

A reading of data regarding genome sequencing tracked by cov-lineages.org, an initiative of researchers from several international universities, says that the UK has sequenced 93,544 genomes since the first case with the new variant surfaced. Of these, 13,108 were found positive for the new variant.

But there are countries that have sequenced far less and have proportionately reported more cases than others. For instance, India has submitted only 20 genome sequences to international databases since the first case of this variant was reported in the country. Of these, seven have been confirmed as having the new lineage, a frequency of 35 per cent.

However, India has reported more than 100 cases of the UK variant. According to government officials, all of them have been confirmed through sequencing. So why does the international database show only seven?

A Council for Scientific and Industrial Research scientist said the entire genome of every positive sample (of UK travellers) does not undergo sequencing.

Instead, in most of the positive samples of the UK returnees, only the spike or the ‘S’ protein region in the genome is being sequenced. This is being done because it is the spike protein region of the virus that has undergone mutation. Since only entire genome sequences are reported in international databases, the number in the case of India would be small, that is 20.

Therefore, this data might suggest a 35 per cent frequency of this lineage in India. But since the denominator is so low, the proportion appears high, which is not the correct reading.

It is quite natural for a virus to mutate if it has to evolve. That is because a virus has to survive against all odds. It has to counter all the pressures that treatment measures bring. Therefore, it will change. Or mutate. But scientists say not all mutations are noteworthy.

Usually, they keep an eye out for changes in the antigen — a molecular structure present on the outside of the pathogen, which the immune system reads to trigger a response against it.

Most of the time, the changes are insignificant and at best, just create sensational headlines. But scientists get alarmed when they encounter mutations that can make the virus more infectious or severe.

The first such prominent change in SARS-CoV-2 appeared as early as February 2020, when it displayed a mutation termed “D614G”. The mutation helped the virus spread faster and infect more easily than the one that had originated in Wuhan, China. But it did not change its other properties nor make it more lethal. By June 2020, the variant with the D614G mutation had replaced the original one, circulating globally.

The other significant change was in a variant found in mink in Denmark in September 2020. According to the WHO, the mutation reduced the capacity of the host’s immune system to neutralise the virus. However, it did not spread much; only 12 human cases have been documented with this variant so far and studies are going on to understand its other impacts.

However, the mutation that has now caught the world’s attention is the UK variant. Just a day before the UK reported a new variant December 19, 2020, South African officials announced another variant. Studies have found it is a tad similar to the UK one but has made the virus more transmissible. Why it is so and whether it can lead to more severe symptoms is not yet known. In the UK, it is now believed that the new variant has been circulating there since October 2020.

In fact, it was only a few variants that made news. But according to a paper published in the open access preprint server bioRxiv December 26, as many as 120 unique variants of this virus have been reported in literature globally.

Some 86 of the 120 genetic variants are associated with immune escape response. Does that mean that these variants would be resistant to the antibodies acquired naturally through infection or artificially through vaccination?

Vinod Scaria, one of the first authors of the paper, said such a conclusion would not be correct. Scaria is a senior scientist at the Institute of Genomics and Integrative Biology, New Delhi.

He told Down To Earth (DTE):

These studies have used monoclonal antibodies. The variants would escape one or more antibodies. But antibodies acquired after infection or vaccination are of more than one type, that is polyclonal. Therefore, while future studies would tell more but at this moment, we believe these variants will not escape all types of antibodies

The paper said 19 of 86 variants that are associated with immune escape response have been found in India. Within India, one of the variants — S:N440K —has been found to have a high prevalence, specially in Andhra Pradesh.

One of the six reinfection cases of the novel coronavirus disease in India has been attributed to the S:N440K variant. However, Scaria clarified that this was just an observation and should not be attributed to any cause-and-effect relationship.

DTE asked Scaria about the prevalence of the UK variant in India. “There are a few cases but it is unlikely that the variant has become dominant. To understand the true prevalence, we may require a surveillance study across the country.”