Bacteriophages: An answer to antibiotic resistance

Every two to three months, Ritam Das, Saroj Chaudhary and Ritu Arora — who are undergraduate and PhD students at the Acharya Narendra Dev College in South Delhi’s Govindpuri — travel to some of the dirtiest corners of the city to collect soil samples.

They take samples from drains, sewage and even places where people spit. “The dirtiest sample is the best sample,” says Ritam Das. But what are these “best” samples for?

It is this. The group isolates bacteriophages — viruses that can kill the bacteria — from these samples.

With these bacteriophages, Kalakoti, Das, Chaudhary and Arora, along with their professor Urmi Bajpai, are trying to find a cure for tuberculosis (TB). Over half a million new cases of rifampicin-resistant TB were reported globally in 2018.

Of these, 78 per cent were multidrug resistant TB patients. In 2018, India had 27 per cent of the total global burden, according the Global Tuberculosis Report 2019.

Bacteriophages are found naturally where bacteria are present and these students are collecting samples from places where such bacteria could be present in abundance.

The group has also found effective phages in samples from Dwarka, Faridabad and Janakapuri. Bajpai feels that phages can partly solve the problem of antibiotic resistance.

But her work is constrained as she does not have the facilities to work on pathogens. Without this, the students cannot work directly on the TB bacteria (Mycobacterium tuberculosis) and have to work on Mycobacterium smegmatis. “We can only get the viral genetic material sequenced and then use computer models to figure out whether they work,” says Bajpai. The team is looking for enzymes that work on the bacteria.

Bacteriophages are not approved for treatment in India though clinical trials are underway. In the Banaras Hindu University (BHU), Varanasi, they are being used to treat non-healing wounds.

Gopal Nath, who is head of the department of microbiology at BHU’s Institute of Medical Sciences, says bacteriophages could be used to treat chronic wounds that don’t respond to standard treatment. “

The creation of a biofilm by the bacterium is the problem as this does not allow the antibiotic to penetrate the wound,” he says. To work around this, he used a cocktail of customised bacteriophages effective on Escherichia coli, Staphylococcus aureus, and Pseudomonas aeruginosa isolated from the wounds of 20 patients between the ages of 12 and 60.

The cocktail of bacteriophages was topically applied on the wound for alternate days and the team saw a significant improvement after 3-5 doses. Seven of the 20 patients achieved complete healing within 21 days. This significant study was published in International Journal of Lower Extremity Wounds in June 2019.

Such phages are being used outside India too. PhagePro, a US-based biotechnology company, is using bacteriophages against strains of cholera. Their product, ProphaLytic-VC, can be taken orally and is especially useful for people exposed to cholera infections while they were taking care of sick community members.

One of their products, EcoActiv, targets adhesive invasive E coli in patients suffering from Crohn’s disease. The clinical trials have entered the second phase at the Mount Sinai Hospital in New York.

Though phage therapy is more specific and customisable treatment, it is also associated with complications.

Sankar Adhya, who is with the US-based National Cancer Institute, says, “The phage therapy would not be a drug that your doctor writes a prescription for. It has to be operated by some centres approved by the Food and Drug Administration for chronic infections using custom phage cocktails for specific infections.”

“The centres must maintain large libraries of appropriate phages well characterised, free of toxins and lysogenic capacity. In phage therapy, it has to include a few days of waiting before the customised medicine is made available for a patient,” he added.

With inputs from Medha Bhat 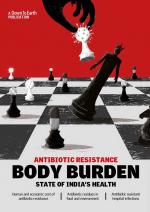 Antibiotic resistance will kill an estimated 10 million people every year by 2050; most of them from developing countries. Our latest book in the State of India’s Health series unravels a public health crisis in India that is going to soon become a nightmare. Visit our store for your copy of Body Burden: Antibiotic Resistance