High density in India's urban areas is one of the reasons behind the spread of COVID-19. Photo: Vikas Choudhary

Twenty districts accounted for two out three cases positive to the novel coronavirus and three-fourths of the deaths due to the ensuing disease (COVID-19) in India, according to an analysis done by Public Health Foundation of India (PHFI).

Only a tenth of India’s population resides in these 20 districts.

More than half of these 67 per cent cases and 77 per cent deaths have been in five cities — Mumbai, Delhi, Ahmedabad, Chennai, and Thane — that are home to four per cent of India’s population. 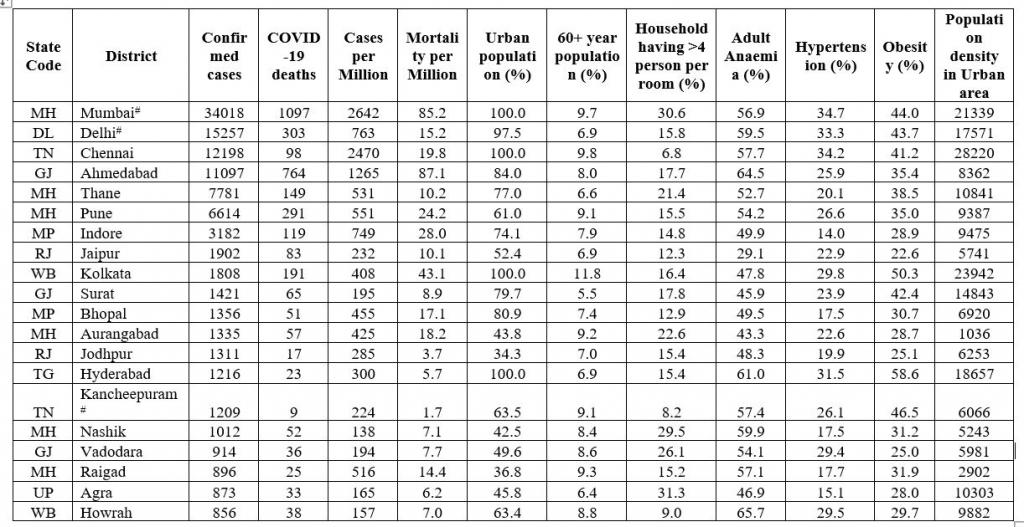 As of now, COVID-19 has targeted homes mostly in urban agglomerations of the country, according to the analysis. Half of the population in 15 of the 20 districts is urban.

However, some of these cities also have better testing rates than others which do not figure in this list. Does more testing mean more cases?

“Not entirely. Had that been the case, the test positivity rate (number of people testing positive as compared to the number tested) would have gone down, with tests going up,” the analysis’ co-author Dileep Mavlankar, who is director of the Gandhinagar-based Institute of Public Health (IPH), told Down To Earth.

“But that is not the case, especially for bigger cities in the list. This means there is high seeding of infection in these areas,” he added.

Within these cities too, there were certain hubs or wards where cases were concentrated, Mavlankar said.

“It is wrong to declare an entire city as being in the Red or Orange zone. For instance, in Ahmedabad, most of the cases are in 5-10 wards,” he said. “In rural Ahmedabad, which has 400 villages, the number of cases is just 150. Hence, if an entire city is marked Red, it not only causes unnecessary anxiety to people but also hampers regular health services of the city,” Mavlankar added.

“The data does suggest that in Ahmedabad, there are 17.7 such households against Thane’s 21.4. But if one looks at various wards of Ahmedabad where cases are localised, one would find that there, the population density is much more than Ahmedabad city as a whole,” the IPH director said.

What was required was granular data, at least from these cities, he said. “The government has to collect it at sub-district level if it wants to fine tune its fight against COVID-19,” he said.

Mumbai has borne the brunt as four people sleep in a single room in nearly 30 per cent households. However, if one looks at the analysis, Chennai proves to be an outlier. The cases per million in Chennai (2,470) is nearly similar to Mumbai (2,642). However, the number of households in Chennai where four people sleep in one room is only 6.8 per cent.

Similarly, cases per million in Ahmedabad are more than that of Thane though in the latter, the number of households where four people sleep in a single room are more than the former.

Besides the number of cases, these 20 cities have also registered the maximum share of deaths. The death per million population (DPM) average in 10 of these 20 districts is higher than the national average.

“It may reflect that a few cities have COVID-19 burden completely different from the rest of the country,” Mavlankar said.

“The analysis attributes this to their high prevalence of comorbidities like anaemia, hypertension and obesity in these cities, according to data sourced from National Family Health Survey of India 2015-16 and the proportion of people aged above 60 years in the total population. We urgently need to augment health infrastructure here,” he added.

There are already news reports from Mumbai about health systems being overwhelmed. Mavlankar confirmed the same about Ahmedabad.

“What has further led to chaos is the fact that people do not know how well prepared their systems are. The governments, everywhere, and at least in these cities, should daily publish how many vacant beds and ventilators are available in which hospital so that people need not go from one to another, wasting crucial time,” he said.