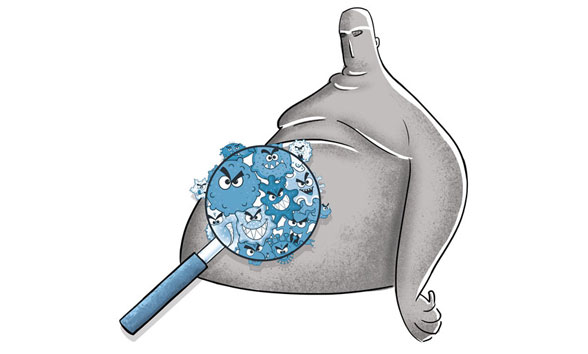 Bad diet and lack of exercise have been held culprits for obesity for a long time. Lately, though, an ever increasing amount of evidence has accumulated to reveal that the gut microbiota—a fancy name for bugs that inhabit your gut—may be responsible for a variety of lifestyle diseases, including obesity. An average human gut is home to 1014 microbes which is, astonishingly, 10 times more than the number of cells that make up a human body. The gut microbes live the life of barter. They depend on us for their food, and in turn, end up producing chemicals that aid our digestion, enhance our immunity and sometimes even control our mood.

Thanks to our understanding of gut microbes, the trend of consuming probiotics—food rich in live organisms like yogurt—has increased. Though probiotics have often been associated with good health, their role in controlling obesity is not clearly understood as yet. A 2015 study by China’s Shanghai Jiao Tong University, which was published in EBiomedicine found that modulation of gut microbial population was effective in managing obesity in not just physiologically obese people, but among patients afflicted by Prader-Willi syndrome—an inborn genetic disorder associated with obesity, which leads to excessive eating and lack of satiety. In the study, gut microbial population was altered in subjects by feeding them a “diet rich in non-digestible but fermentable carbohydrates”. The diet “promoted growth of beneficial groups of bacteria and reduced toxin-producers, alleviating metabolic deterioration” associated with obesity, regardless of whether it was genetically inherited or lifestyle-related.

However, another study by scientists from Keimyung University, Daegu, South Korea, published in Nutrition Research in 2015 analysed evidence from clinical trials that tested the effectiveness of probiotics as a treatment for weight loss, and found that probiotics have “limited efficacy in terms of decreasing body weight and body mass index (BMI) and were not effective for weight loss”.

A study by scientists from the University of Minnesota, published in Discovery Medicine in 2015 talks about a special gut species, Akkermansia muciniphila, which has been “reported in several independent studies to have a potentially protective effect against obesity”, making it a “good candidate for consideration in a probiotic”. However, the scientists suggest, rather than consuming it as a probiotic, its growth inside the gut can be promoted by consuming prebiotics like oligofructose. Prebiotics are non-digestible fibre compounds that promote the growth of the desired bacteria (like Akkermansia in this case) inside the gut. Basically, it is the food that good bacteria inside the gut love.

In their therapeutic avatar, the gut microbes assume several forms. In a study published in The Journal of Clinical Investigation in 2014, US scientists genetically modified common gut resident E coli to produce chemicals that suppress appetite. They tested mice with the genetically modified (GM) E coli and found that the mice which received the GM E coli treatment, gained 15 per cent less weight than the ones that did not receive the treatment. However, to roll out such therapies, the biggest challenge lies in limiting the transmission of modified genetic matter from the GM E coli to other bacteria, says Sean Davies, a pharmacologist at Vanderbilt University, and the key person associated with this study. Human trials are awaited.

Another, rather unique strategy of controlling obesity is through introduction of microbes in faeces into obese people. Your poo is essentially a reflection of how good the state of your gut is. For healthy people, all good microbes inhabiting their gut are passed out along with the faeces. So, for someone who is struggling with obesity, and has the wrong kind of gut microbial population, thin people are sources of good microbes—the kind that are associated with the absence of obesity.

In the 1014 microbes that inhabit an average human’s gut, finding the ones that are specifically associated with thinness is tough. So, faecal transfer becomes something like a bypass route, where, instead of finding one particular bacteria that may promote thinness, one transfers a faecal concoction from a thin person into a fat one, and hopes that the ones associated with thinness have also got transferred. Stephen Malnick of Kaplan Medical Center, Rehovot, Israel, is running a clinical trial that will examine “if the transfer of faeces from a thin donor will result in weight loss?” Only time will tell if this hypothesis has worked or not.

Diets and lifestyles in India vary from region to region. As a result, the gut microbial population varies too. Yogesh Shouche, a scientist with the National Centre for Cell Science, Pune, who is associated with the Pune Microbiome study, says, “Our observations indicate that Indians harbor some unique species of bacteria in their gut (different from western world), but a lot more research needs to be done before we confirm the results.” This means that microbial therapeutics developed in other countries may or may not work for us. And we may need research conducted on local populations to come up with new therapeutic options that work for us.

What remains the biggest impediment in such studies is the lack of understanding about the workings of microbes inside the gut. The 2015 study by Shanghai Jiao Tong University, where authors worked with patients of Prader-Willi syndrome, offers a hypothesis to understand how gut microbes function. They say “gut microbes function very much like rainforests, where different species come together to form a functional group. Each group often has a founding member and the group members grow or decline together”. The authors believe that the hypothesis will provide a “new framework for further research—to look for foundational species that promote a good microbiome”.

In the gut microbiome puzzle, it may take some more time before all the pieces find their rightful place. So despite the tremendous promise that microbial therapeutics hold, implementable solutions are still in the research stage.