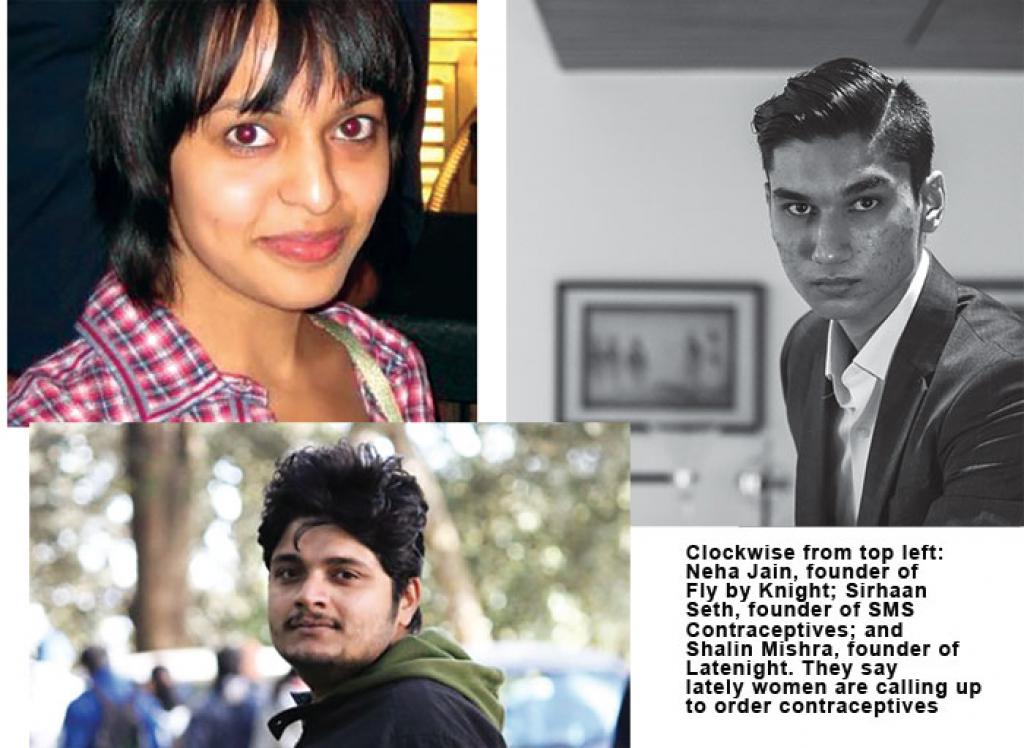 Most of us remember the first time we bought a packet of condoms—and the embarrassing story associated with it. Now there is an easy alternative to the awkward encounters with the chemist.

sms Contraceptive is a start-up in Gurugram that promises to deliver condoms, lubricants and contraceptive pills in flat 30 minutes at any time of the day.

The company is the brainchild of an 18-year-old management student from Sonipat, Sirhaan Seth, who says personal experiences and harrowing stories of his friends prompted him to start the venture.

“One of my friends was asked by the chemist to spell out I-pill just to humiliate her.

Our aim is to change this mindset,” says Seth. He adds that delivery men are stationed at strategic points across Gurugram.

“Customers are usually in a rush when they order. So we have a 30-minute delivery policy. Moreover, we have a no-doorbell policy. Our runners call the client after reaching the location. The customer can come outside the house and collect the order, which is packaged discreetly,” says Seth.

Batman Delivers is another start-up that delivers sexual-wellness products besides food and other essentials to one’s door in the National Capital Region.

Whatever One Wants (wow) and Latenight in Bengaluru and Fly by Knight in Mumbai are other such service providers (see ‘How to order’).

High on demand
Most start-ups claim that the sector is in a nascent stage and has a good growth potential because it requires little investment and has a healthy demand. In fact, several of the companies started with food delivery and later added sexual-wellness products to the list because of the demand. “We decided to deliver sanitary items, toiletries and contraceptives after we started getting regular requests from customers to pick up condoms from a chemist when delivering food,” says 34-year-old Mani Kishore, ceo of wow.

The decision to deliver sexual-wellness products has pushed their sales. “While food generates about 40 per cent of our revenue, 60 per cent is generated by sanitary items, toiletries and contraceptives. On an average we receive 10 calls for contraceptives every day,” says Kishore. wow makes a profit of `50,000 a month from selling sexualwellness products.

“The investment is low because it just requires a few bikes and delivery boys,” says Kishore. wow is operating out of Kishore’s residence in Koramangala locality of Bengaluru.

“After receiving the order, we pick up the items from the chemist and deliver. We also stock condoms for deliveries at odd hours, when most chemists are closed. We do not deliver oral contraceptives pills late at night because we do not have the licence to stock them,” he says.

sms Contraceptive claims that it started making profits in the first few months of operation. “We earn from the delivery charge, which is 50 to 60 per cent of the product price. The idea is to bring it down as the volume of orders increases,” says Seth.

“We receive four to five orders a day, and the average size of an order is about `350. Our revenue is currently `60,000 a month. We expect the number of orders to rise to 10-12 a day very soon. Then we will make a profit of about `75,000 a month,” says Seth. Talking about the potential, Kishore says several venture capitalists from across the country and even South Africa are interested in investing in the sector. “The idea is to take the service to places where sexual-wellness products are a taboo,” he says.

A safe bet for women
Health experts say the start-ups have the potential to promote the use of contraceptives and check unwanted pregnancies, especially in teenagers. According to the 2013 United Nations Population Fund report, India accounts for 20 per cent of the 7.3 million pregnant teens worldwide.

“I have seen a 60 per cent jump in teen pregnancies in the past 10 years,” says Deepa Kohli, chief obstetrician and gynaecologist at Akanksha Maternity and Nursing Home in Noida. She adds that girls as young as 13 years have come to her for abortions. “They obviously lie about their age and try to dress up like adults. This is primarily because discussing sexual health has always been a taboo in our society. We need to open our minds to the fact that children today are getting sexually active way earlier than earlier generations,” she says.

Sharada Vasantha, senior resident doctor, Department of Medicines, All India Institute of Medical Sciences (aiims), also says making contraceptives available discreetly on call will promote the idea of using contraceptives in urban India. “Such start-ups need to go together with education on how to use contraceptives. We need to have proper educational models in schools and colleges, breaking the barriers of awkwardness on how to use condoms or lubes,” Vasantha says. If people are educated about safe sex, initiatives like these will go a long way in preventing unwanted pregnancies, she adds.

The young entrepreneurs are aware of this social benefit of their initiatives. Seth says sms Contraceptive’s tag line—Lads do not carry protection. But sassy ladies do— attempts to debunk the general belief that buying contraceptives is a man’s job. Kishore says the home delivery service is especially helpful for women because of taboos in our society. “The number of women who call up to order for condoms is gradually increasing, which is a healthy sign,” says Kishore .