Caught in second COVID-19 wave? What signs of surge in new entrants mean 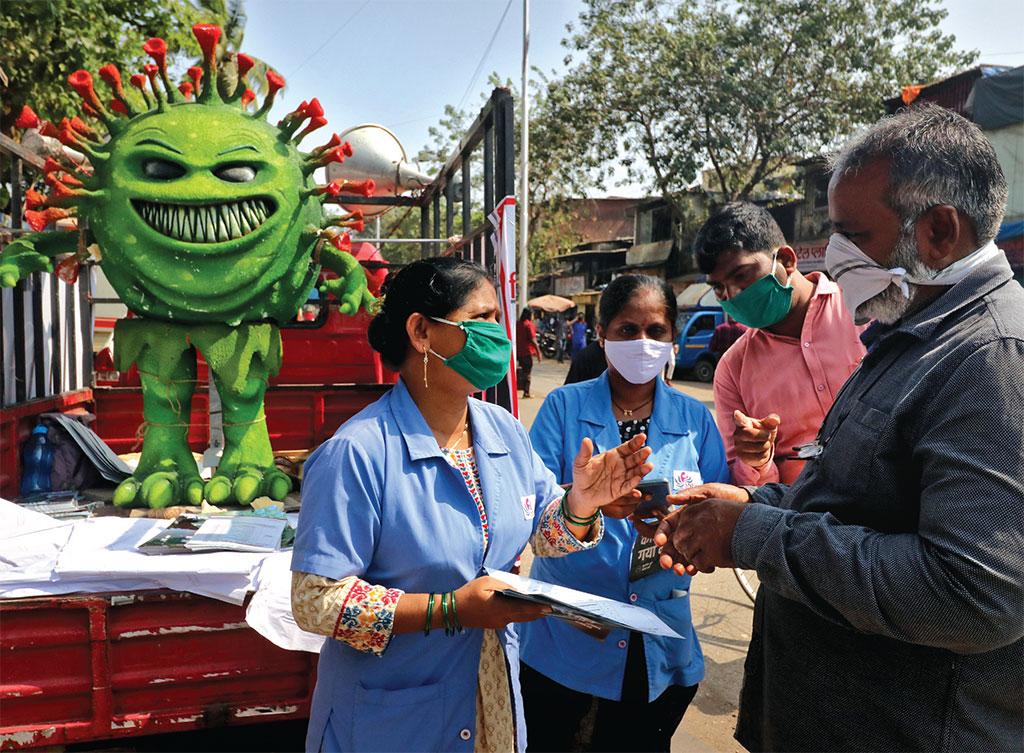 A Union health ministry team that recently visited Maharashtra says the state health machinery has been lax after the downward trend of COVID-19 since September 2020 (Photograph: Reuters)

February 2021 was a roller-coaster month in India’s more than a year-long fight against the novel coronavirus disease (COVID-19) pandemic. Early that month, the British and American media outlets highlighted the continuous downward trend in COVID-19 cases in India. They quoted researchers calling for investigation into how the country beat the pandemic while the West experienced gruelling second and third waves.

But towards the second half of the month, India saw a reversal in the downward trend of infections reported since the end of September 2020.

According to the World Health Organization’s weekly update on COVID-19 issued on March 3, India witnessed an increase of cases by 21 per cent in one week. This was the second-highest quantum of increase that week across the world after Italy.

Some of India’s states that show a clear resurgence in February-March include Maharashtra, Kerala, Punjab and Madhya Pradesh. Those that record an intermittent upward and downward trend include Tamil Nadu, Gujarat, Haryana and Jammu and Kashmir.

What is notable is that in all these states, there are three to four districts which are new entrants in the list — these are the ones that did not previously feature in the states’ list of top 15 districts for high case burden.

Consider this. In Maharashtra, Mumbai and Pune remained in the headlines for high number of COVID-19 cases all through the pandemic. But in the past couple of months, Amravati district has recorded a sudden spike in cases, prompting a full-fledged lockdown on February 21 — the first since the country began to ease restrictions in July last year.

Yavatmal, Akola, Buldhana and Wardha districts have also figured in the state’s top 15 list for the first time. A similar trend is observed in the other states showing a spike now.

Even the report submitted by the Union health ministry’s three-member team that visited Maharashtra on March 1-2 to study the resurgence confirms this fact. The virus is spreading to hitherto unaffected areas: To tier-II towns and even rural areas, noted the report.

The government has so far refrained from calling the latest resurgence a second wave. But economist and epidem iologist Ramanan Laxminarayan, the founder-director of the Center for Disease Dynamics, Economics and Policy at the University of Washington, US, says, “This is a second wave.”

On February 17, India’s reproduction number or R-value rose to 1.09. The R-value is an indicator of the number of people getting infected from one patient. From September 2020 to mid-February 2021, the R-value was at an average of 0.9.

“Before the country’s R-value increased, some of the states were already recording values higher than 1, clearly indicating that things are not good,” says Sitabhra Sinha, professor at the Institute of Mathematical Sciences in Chennai. According to Sinha’s analysis, R-values of Punjab, Maharashtra and Madhya Pradesh rose above 1 on February 3, February 12 and February 14 respectively.

Even in India as a whole, the latest jump in R-value is significant. Though it has since declined to 0.6 in the week ending March 4, Sinha says it is too early to determine the ultimate value at which it would settle during this wave.

Could be milder but...

The Union health ministry has so far not been able to pinpoint the exact cause of the resurgence. Its three-member team that visited Maharashtra noted in its report that people previously believed that the disease only hit urban areas and therefore did not practise COVID-appropriate behaviour.

It also mentioned other possible factors such as overlooked cases, super-spreading events, increased movement due to the recent panchayat elections, the wedding season, opening of schools and crowded public transport, among other things.

“People are not forthcoming for strictly following quarantine or getting testing done,” it said. It also pointed a finger at the state health machinery, saying it has been lax after the downward trend since September.

While similar reports from other states are yet to come, some experts describe this new trend as being part of the natural evolution of the virus, SARS-CoV-2.

“A virus does not know geographical boundaries. Once it has spread and infected a large number of people within a given area, be it a state or a district, it will naturally go to other areas with more susceptible people,” said Gagandeep Kang, a microbiologist with the Christian Medical College in Vellore. In other words, the virus will seek areas where fewer people are immune to it.

Does this mean that the resurgence trend in India will follow that of other countries? Kang said it might not be prudent to make such a comparison.

The last serosurvey conducted by the Union government between December 27 and January 8, whose report was released on February 4, showed a seropositivity rate of only 21 per cent, thus indicating that a large part of India’s population remains susceptible to COVID-19. (Seropositivity rate is the estimated proportion of people who have developed antibodies against the virus). But Kang said the serosurvey result was a gross underestimation of the country’s true infection prevalence.

India’s seropositivity rate is actually much higher as compared to the other countries. Several other experts also raised this point and alleged that the sample size of the Union government’s serosurveys did not factor in the containment zones, where the viral load was high.

This means, explained Kang, infections might be recorded in new areas but the second or subsequent peaks in the country would be smaller than the one experienced in September 2020, and will cause milder infections. The report submitted by the health ministry’s three-member team also says there is a sense that “the current wave is less virulent”.

However, one factor that most experts are discounting at the moment is the role of newer variants. Till March 4, India had reported 242 cases of three worrisome variants circulating globally — United Kingdom, South Africa and Brazil variants. The ministry has not provided a breakup of these.

But the health ministry’s three-member team does allude to what it calls the “internal mutation” of the virus in regions like Amravati as a potential cause. Its report said this mutation may cause SARS-CoV-2 to spread faster even though it is less virulent.